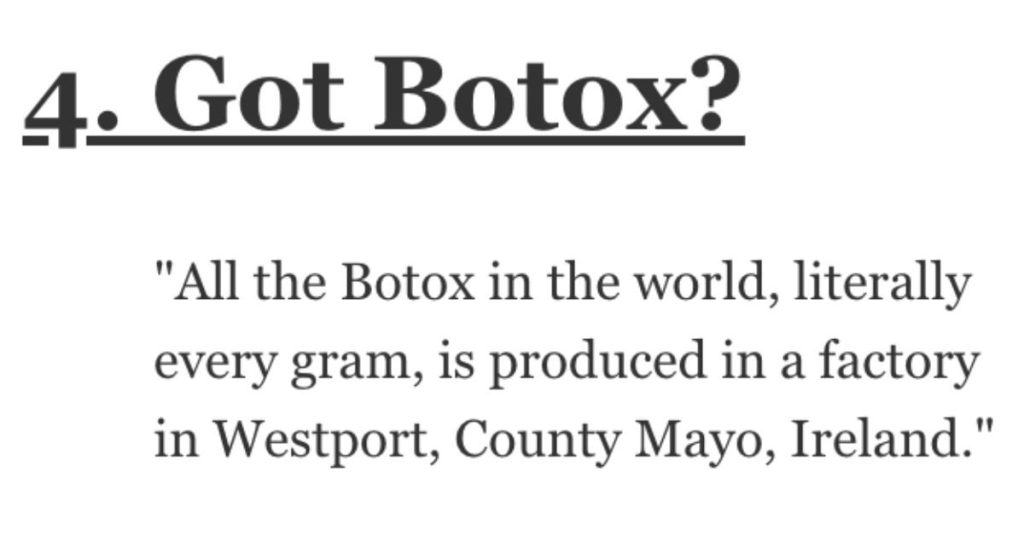 Are you ready to have your MIND BLOWN?

We sure hope so, because we’re about to hear from a bunch of folks on AskReddit who firmly believe that they have some seriously incredible facts in their back pockets.

Read on to get blown away!

“You know when you get up too fast and feel dizzy?

Squeezing/stiffening your buttocks together stops the dizziness.”

“We landed on the moon before someone thought to add wheels to suitcases.

Dinosaurs were discovered in 1824.

“All the Botox in the world, literally every gram, is produced in a factory in Westport, County Mayo, Ireland.”

“Greenland sharks can become up to 400 years old and don’t reach s**ual maturity until they’re 150.”

“When airline pilots are trained to fly a new type of jet, the first time they fly it is with paying passengers on board. All the training and testing is done in a simulator.

Of course they have a lot of flight time in other airplanes and there is a specially qualified training captain in command. However my first jet takeoff was LAX-DEN with 68 unsuspecting passengers.”

“Back in the days of dinosaurs, there was no grass.

There is some overlap, but there was a time when dinosaurs walked the earth and there was no grass.”

“There are more trees on planet earth (~3 trillion) than there are stars in our galaxy (~800 billion).

Note it says our galaxy (the milky way), not the entire universe. Still I find the sheer number of trees on our planet impressive.”

“Neptune was originally discovered as apparently inexplicable changes in the orbital path of Uranus.

Because a man named Le Verrier observing these alterations decided that there must be an orderly reason for it, he calculated where another planet would have to be to cause Uranus to act like that, and still keep the laws of gravitation discovered by Sir Isaac newton.

He then sent his calculations to Royal Observatory in Berlin, and the prediction was within 1° of its actual position.”

“The Earth is traveling through space at 2.1 million km/h (1.3 million mph) relative to the cosmic background radiation.

Which means by the time you finished reading this, you’ve travelled roughly 8,700km (5,420 mi) through space.”

“A tablespoon of oil can calm about half an acre of water.

It spreads out to form a layer 1-molecule thick on top of the water. That’s why oil spills are so harmful and destructive.

Do you have any mind-blowing facts?

Lay them on us in the comments.

Thanks a lot, amigos!