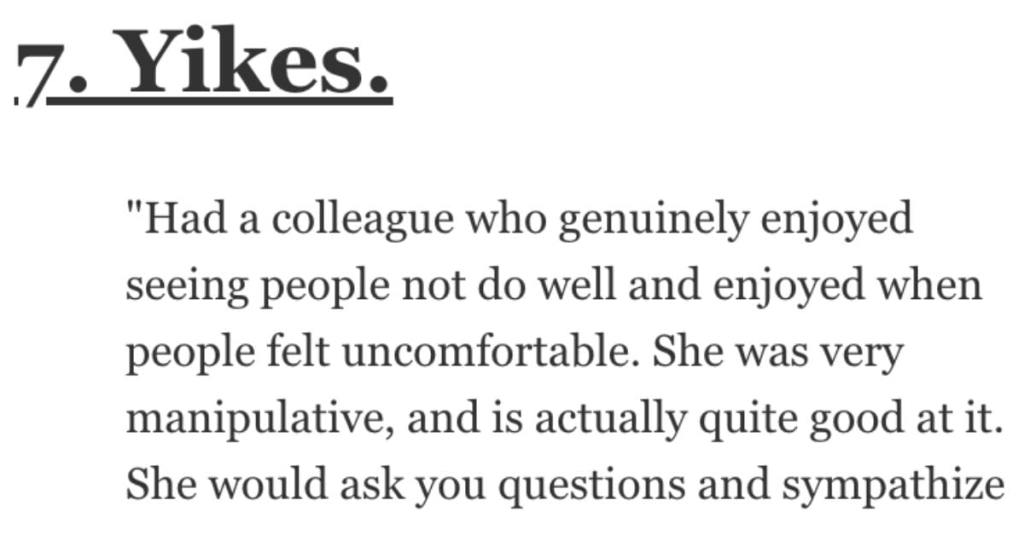 Who Was Your Co-Worker From Hell? Here’s How Folks Responded.

I know my answer to this question!

I used to work with a guy who I’ll call “Jimmy” who was, without a doubt, the biggest scumbag I’ve ever met in my entire life.

He made every day a living Hell and, on top of that, he sucked at his job so he dragged the rest of us down with him.

Ugh, I’m so glad I never have to see that guy ever again as long as I live.

AskReddit users talked about the terrible co-workers they’ve had to deal with.

“I had a 50 year old colleague who would message women on sugar baby apps and rub one out over his trousers. Saw him blow his load in the open office. He sat next to me.

Kept on happening, reported it. He said he had a genital rash, but admitted to ‘messaging people on social media’. I got in trouble for my accusations.

Fast forward 8 months, he’s sitting opposite me now. He starts rubbing one out in the open office again. I recorded him. Showed my manager, and he was finally fired.

Has been at her job too long, and tries to control everyone.

My job has a high turnover in this one office but they refuse to believe it’s her.”

“She didn’t officially work at my store’s location.

She was supposed to be at another location training to be a manager there, but her predecessor was still working at said location and the upper management/boss didn’t want too many people working there at once. So she had to work at my store’s location instead.

As soon as she started, she had a problem with me. I don’t know why, I’ll never understand why. I suspect my resting b*tch face had something to do with it. She essentially bullied me from the get-go and when I told my manager about it, she claimed nothing could be done since the rude lady wasn’t officially under my manager.

So one day the b*tch started bumping into me and saying “You have a problem with me? Let’s take it outside.” Etc. I was half her size, I’ve never fought in my life outside of sibling squabbles, and I have terrible social anxiety. So I went to the bathroom, called my S/O to come pick me up, grabbed my things, and walked out on my shift. I didn’t say a word to anyone and left her there alone during lunch rush.

I later learned from my friend who also worked there than my manager didn’t blame me, and officially, like on the papers, she said I left for “personal reasons”. She was a nice woman and I don’t blame her for not being able to do anything.

Upper management at this chain was very irresponsible and didn’t seem to care about that store location whatsoever (checks came in late almost every week, we weren’t allowed to have more than two people working in the store at a time, didn’t always have enough budget to order food/supplies, etc)

I’m never working for that man’s chain again. I may work for the same store, but I’m not going to work if it’s one of the locations that asshole owns.”

“Girl I worked with when I was a personal shopper. She tried to get me fired a couple of times because she saw I was moving up faster than her.

We both got sent to work at a different location for a couple of months and she went around bad-mouthing me to anyone who would listen, so they thought I was a sh*t employee and she was amazing. I proved myself with my work ethic and they realized she was a liar and it definitely changed their opinion of her.

I ended up going to a different location and when she went back to our original location she continued to say horrid things about me. My co-workers took my side and called her out on her BS. She left not long after on a bad note with them.”

“Can’t go home unless I pass over my reports to the next person face to face.

Best part, she loves b*tching about how everyone is always on her ass for coming in late.

She literally lives 5 minutes walk away from work, so no one knows why she’s always late.”

“This woman who was one of those people who always had to one up you.

Like if you cut your thumb off, she was just recently sawed in half.

She was constantly complaining and miserable and it was so draining.”

“Had a colleague who genuinely enjoyed seeing people not do well and enjoyed when people felt uncomfortable.

She was very manipulative, and is actually quite good at it. She would ask you questions and sympathize with whatever you’ve got going on, only to turn around and tell everyone what you just confessed to her.

After about 2-3 months with the company, if she hasn’t already somehow screwed you over, you’ve heard enough about her to know that if you don’t want the rest of the room to find out, then you don’t tell her.

Yeah, I’m talking about you Carolina.”

“She almost got me fired because she wanted to find the weakest looking guy to be her little errand boy.

When I told her politely to go screw herself, she told HR that I had been taking work out of her queue in the system.

It wasn’t a very good lie though, because why would I want to do more work than I have to? I even said this to HR in the disciplinary meeting.”

Normally he was a teddy bear but when his blood sugar got low he would get violent. He tried throwing punches at me for suggesting he get a coke from the vending machine in the hall (good thing he’s slow and clumsy in that state).

When we were in the truck together once, and it started making a weird sound, I wanted to take it into the shop and he insisted we didn’t need to by yelling at me and pounding his fists on the dash, but we were going to a remote area and I didn’t want to have to try and find help if the truck broke down and the radio didn’t work.

I had to call search and rescue on him once because he didn’t come back to the truck after doing a transect (biology job). You guessed it, he had low blood sugar and was not able to find his way back to the truck. He had no education or experience in biology, but he just couldn’t be fired from his job driving a plow. With his propensity to let himself get hypoglycemic, he couldn’t drive either.

So they shuffled him to the wildlife department because he had an interest in wildlife. I was basically his babysitter.”

“I’ll never forget the 22ish year old girl who spent hours of one shift telling me, with no prompting at all, about how she used to be a raging heroin addict but she was over it now and had become extremely religious.

She went into very explicit detail about her drug deals and the things she’d done to get drugs. My shy homeschooled *ss was stunned.

The very next day she got fired for stealing 20 dollars from the cash register.”

“I work with a woman who is threatened by other women, especially if they are younger and have more education than her.

She consistently tries to discourage women from furthering their education, and constantly tries to get women she is threatened by fired.

She is a nightmare.”

Have you ever had a really terrible co-worker that made every day at work really suck?

If so, tell us all about them in the comments.