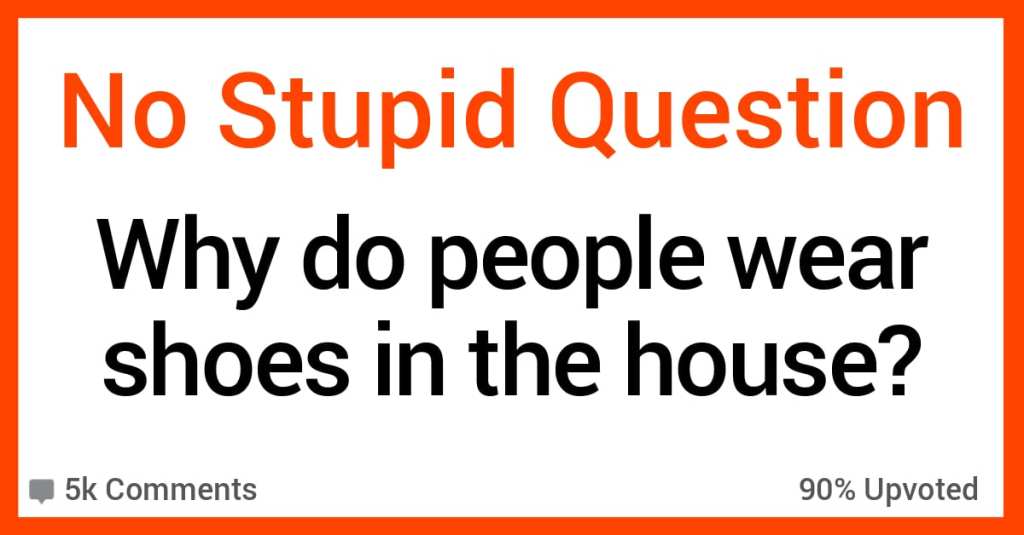 Why Do Some People Wear Their Shoes in the House? 14 People Share Their Thoughts.

By now, you’ve probably realized that the tendency to wear shoes in the house – or not – is largely a cultural thing. Cultures where wearing shoes in the house is taboo cannot understand why Western countries insist on tracking filthy germ boots onto the carpet, and honestly…we don’t have much of a response.

Except, you know. Leave us alone.

This guy was brave enough to ask the question on Reddit, so let’s see what the responses were, hmmm?

I live in NYC and it completely skeeves me out to think of walking into my house with shoes on. The sidewalks are walked on by so many people, so theres people blowing snot rockets, couching up a loogie, dog poop, and tuberculosis vomit from bums. You would have to be CRAZY to track that sh%t into your house.

Maybe things are different in nice quiet and clean middle America towns where people only walk the length of their driveway and get into their cars – but living and walking the NYC sidewalks, you would be a disgusting person to walk around your house wearing those shoes that stepped on the most vile of things.

13. In some areas, it’s a practical necessity.

I think that this is more common in places where they don’t get much snow or rain, like California. In Canada we always take off our shoes so as not to track dirt and mud around the house.

It’s not a hard cultural rule like it is in Japan, but more of a practical necessity. It’s also common to have a different pair of shoes in the office, than the boots that you are wearing walking around outside.

Not all Americans do this. I think it depends on the region.

I’m American and I don’t wear shoes in the house, and neither do the people I know.

But it’s not so much a strict rule like it is in Japan – if I was just quickly running inside to get something, I probably wouldn’t remove my shoes.

11. Because bare feet make the carpet…dirtier?

As someone who sells carpet, (clean) hard sole shoes are actually better for carpet maintenance. The oils in your feet transfer to the carpet and will cause the carpet to matte sooner than they otherwise would.

Regular vacuuming is the most important thing to carpet upkeep, especially if you have a carpet with longer carpet fibers. Vacuuming doesn’t just remove the dirt build-up on the carpet, but also pulls the fibers back to a standing position. Most people do not vacuum their carpets enough, myself included.

10. Cold feet are what socks are for.

Im from the US northeast and I only know 1 person who takes their shoes off in the house and he’s from the South. Maybe it is regional.

I know if I were to take off my shoes for any length of time, I would need slippers, my floors are freezing.

I also have an old house with wood floors, so splinters are a factor.

Growing up in SoCal, we would wear our shoes into our rooms and then take them off.

Our entryway was not big enough for a shoe rack, and it hardly ever rained and never snowed.

Once I moved to the Midwest, I had to cut that shit out.

Snow and mud would be everywhere.

I have stinky feet no matter how much I wash and clean so I try and leave shoes on when I feel its appropriate.

Some houses I just know to take my shoes off.

7. Never thought about that.

Have you ever stepped on a scorpion?

People in the southwest have this issue.

Yes, it varies by region. What many people don’t realize is that America was very primitive while the rest of the world was advanced.

It was not uncommon for a home to have dirt floors well into the 1800’s.

It was well into the early 1900’s (cinderblocks became common in 1915 then) that basements were dirt. Even today it’s fairly common to find dirt floor basements in older homes in New England. Until the 1970’s cinderblock basement were the norm, and some of those even have dirt!

This tradition has carried on even when the need has passed. I think in places that were “civilized” later when technology was readily available to have nice flooring the culture is completely different surrounding shoes.

I’ve lived in California and on the East coast, and the shoes thing is pretty much the same in either place. There’s no real pattern. I find that conscientious guests (when entering a house with fairly clean looking floors) often ask about the homeowners preference for shoes when they come in the door, especially if you see a shoe spot when you walk in, or your host is barefoot. Unless they’re just stopping in briefly (like to pick someone up), then shoes stay on.

The shoe interaction is usually just a “Um, should I…”, followed by a vague wave at feet, and then, “oh, don’t worry about that” or “if you wouldn’t mind!”

I guess if the place is kinda gross you don’t ask- that would probably be kind of rude or odd. Might even seem stuck up. You just wear shoes.

Personally, I don’t expect people to take off their shoes in my house. I’ve got a dog and cat, old splintery floors, and I don’t have time to clean as often as I’d like. Really dirty/muddy/wet shoes stay by the door, but on an average day it is normal for everyone to wear their shoes (or not) as they wish.

4. Every person for themselves.

For my job, I visit 10-15 houses, 6 days a week. I carry a reusable pair of slip on booties because we aren’t allowed to take our shoes off (they’re safety equipment).

When I get to a house I look for clues (glances at my shoes, a pile of shoes by the door) and just slip them on if I think they want me to.

When is messy outside, I’ll put them on at every house.

I also keep an eye out for prayer rooms and cover my feet before entering those.

I grew up in central Arizona where it rarely rains and never snows.

Thus taking off your shoes in someone’s house was something you did only if you’re super familiar with that person or are staying overnight.

2. Overshoes are your friend.

So this makes me wonder what service people in Japan do.

It seems to be a hard and fast rule that one remove their shoes indoors, but doing so for a repair person/ plumber/ cable or internet installer would definitely present a safety risk since they work with heavy tools and equipment.

I wonder if they do the booties thing too.

I’m from NYC, I’ve found its a mixed bag in that some people are super particular.

And a few have gotten mad at me for not automatically doing it.

The moment I educated myself on how nasty our shoes are, and learned there’s actual poop down there, I quit allowing shoes in my house.

Except for my dad, who refuses. There’s always one.

What do you think about this? Why do YOU wear shoes in the house? Or don’t you?