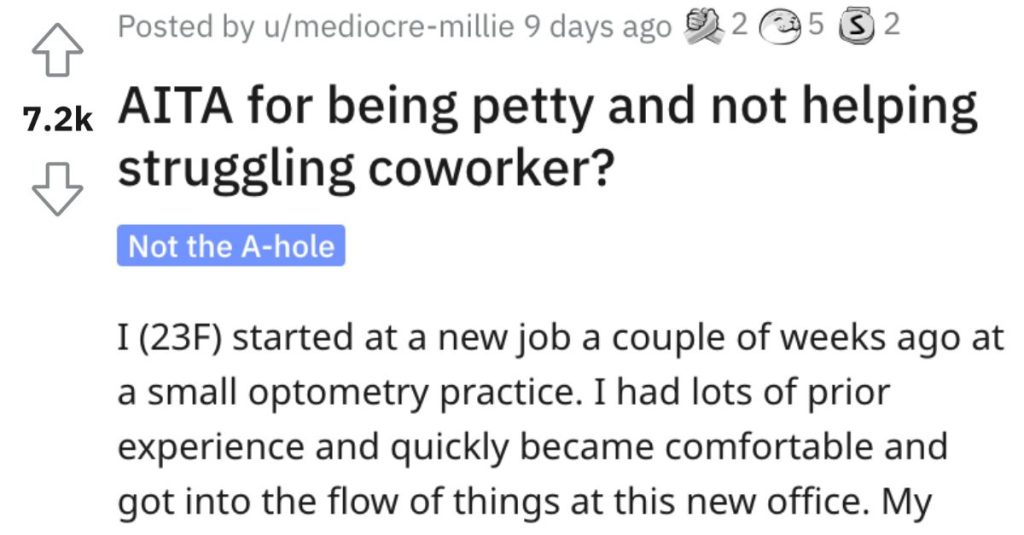 To help or not to help…

That is the question…

Or at least that’s the question in this story from Reddit’s “Am I the A**hole?” page.

AITA for being petty and not helping struggling coworker?

“I (23F) started at a new job a couple of weeks ago at a small optometry practice. I had lots of prior experience and quickly became comfortable and got into the flow of things at this new office. My coworkers are a super nice and the owners/doctors are really chill.

The problem I’m running into is that all my coworkers have their own “niche” that they prefer to do, and for some of them that’s ALL they will do. For example, “Andrea” prefers pre testing patients before they see the doctor, and if the phone is ringing off the hook and there’s no one to answer she will let it go to voicemail because it’s “the front desk job.” I’ve asked the owners if there really are that rigid of positions, and they said they want everyone cross-trained and jumping in to help where needed.

Anyway, today was a little rougher. I’m 38 weeks pregnant and have been incredibly sore and slow today. Usually it’s not an issue, but for some reason today my body is not having it. I was scheduled to pre test today, which involves a lot of time on my feet.

After struggling through the first half of the day I felt like I’m going to collapse. I asked my coworker “Melissa” (40-ishF), who was scheduled today in billing, if it would be okay if I taught her how to do the pre testing so I could trade her for an hour to get off my feet for a bit.

Melissa told me “I don’t want to learn how to pre test. If I learn how to do it I’ll get shoe-horned into it every day.”

(This is definitely not true, I am cross trained in all the tasks and I rotate what I’m doing daily.)

I was almost in tears for the rest of the day trying to do the testing. I was waddling painfully and had stabbing pelvic pain. My boss offered to let me go home after noticing my walk, but I need the money and haven’t worked there long enough to get PTO yet.

Toward the end of the day I pre tested the last patient and got to finally sit down and chart for a bit. The pain pretty quickly started to fade after that. Nearby, Melissa was getting flooded with phone calls and patients with insurance questions. I’m trained on billing and would normally have jumped right in to help, but I was feeling kind of petty and chose not to.

Melissa turned to me after a bit and asked if I would take a call on hold to answer some billing questions for a really angry patient. I’m a little ashamed of this but I responded “I’d rather not get shoe-horned into billing duties all the time.” Melissa glared at me and turned back to her computer. She was incredibly stressed and overwhelmed after that.

As the cherry on top, my boss came up to tell me I was good to leave thirty minutes early and that he’d pay me for that time, so I left Melissa in the dust.

My husband says that while I was a bit petty, I’m not TA because I treated Melissa the same as she treated me. My conscience is bugging me about it and I’m stressed that I’ve created drama in an otherwise drama-free work environment. But at the same time I don’t feel like I was asking too much.

This reader said she’s NTA and that they appreciate her pettiness! 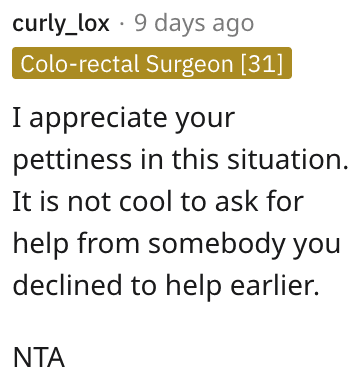 And this individual made a good point about what happened here… 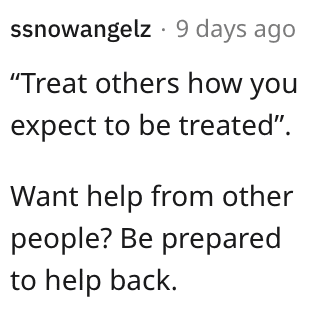 This Reddit user simply said that this woman’s co-worker is a jerk.