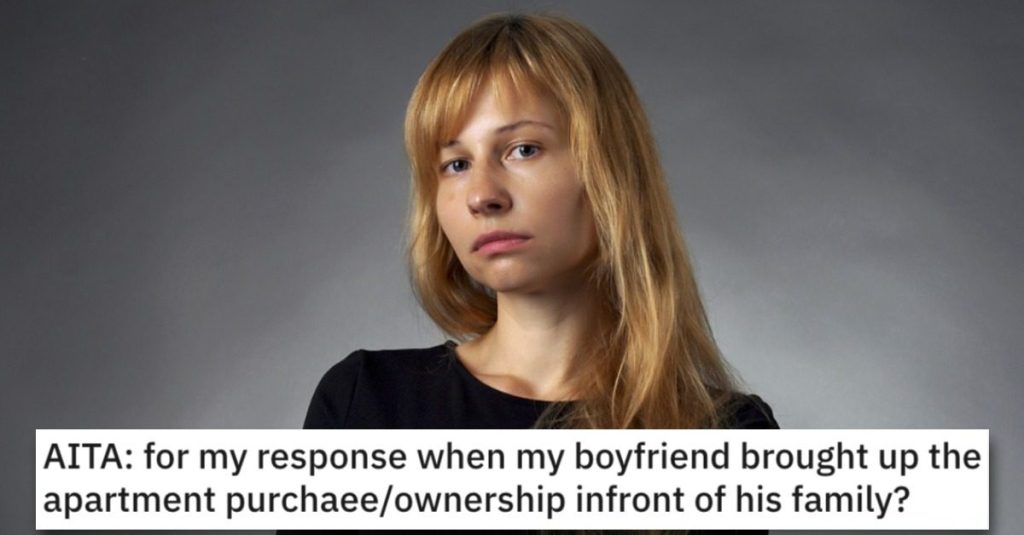 Uh oh…here we go again with a story from Reddit’s “Am I the A**hole?” page about a spat between a couple about who owns what when it comes to housing…

And this one is pretty interesting!

Check out this story and let us know what you think in the comments.

AITA for my response when my boyfriend brought up the apartment purchase/ownership in front of his family?

“Context: I (F29) have been with my boyfriend Adam (M27) for 2 and a half years. He’s the quiet/shy type. It’s very hard to get him to open up about what bothers him. For now I’m the one with an income.

We get along easily though he can be…a bit unreasonable sometimes.e.g he doesn’t cook cause he’s worried I won’t like his food but still cooks for himself and the smell’s pretty telling that he’s cooking is good. Another e,g and that is he doesn’t do most chores saying he’s worried he might break/damage something. It’s frustrating but we’re working on fixing it.

Now unto the more complicated issue… I’d put money aside since 2015 to buy an apartment and I’m finally able to get it done this year. When I told him this he got agitated and said I should wait a little longer til we’re married, but I said no. He started complaining about how bad he feels about seeing me buy the apartment myself without having him contribute.

I asked what I was supposed to do because…it kinda sounded like a “he problem” no offense but… he got so worked up and gave me 2 options…1. is I put his name on the title, 2. is not buy the apartment til marriage so it’ll become “shared marital asset”. I said no and that was final and he should drop it. He did eventually.

At his family’s house, I was taken aback when he started complaining about the apartment and again told me to either put his name on the title or wait til marriage to buy it, cause he feels like there’s a “huge power imbalance” here, and that he can’t bring himself to accept it. He also said that it makes him feel like he contributes nothing. I snapped and said “the reason you feel like you contribute nothing is because you literally contribute nothing and I suggest you fix that by actually finding a job and having a decent income”.

His family looked shocked, he glanced at me then got up and walked away. I waited for him to come back but had to go home cause his mom said he felt too overwhelmed and wanted some space. She then basically started shaming for my “statement” and hinted about financial abuse and control over her son.

He’s not home yet demanding another tall about the apartment probably expecting me to agree to one option.”

One person said she’s NTA and they laid out their case. 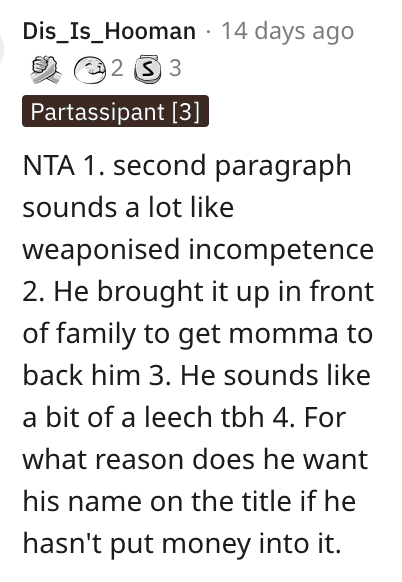 And this reader said this guy sounds like a manipulator. 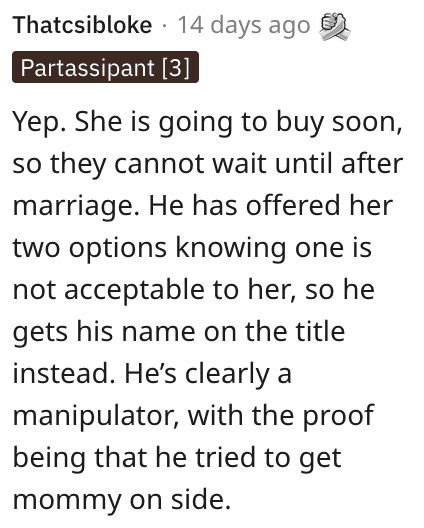 Another person brought up a good point: why does she want to marry this guy?