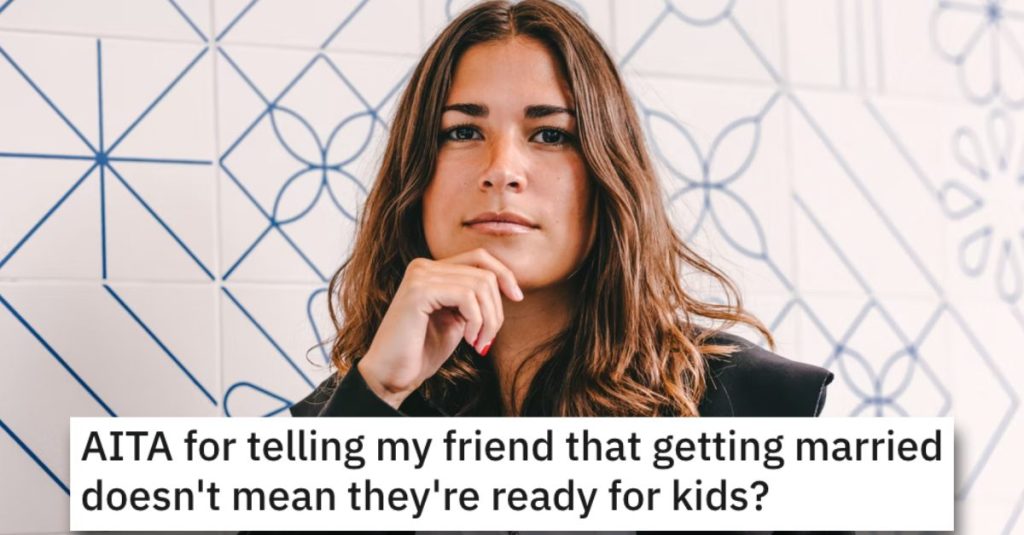 Woman Is Getting Married And Thinks She’s Ready to Have Kids, But Her Friend Disagrees. Is She Wrong?

I don’t like to be the bearer of bad news, but not everyone should have kids…

Even if they really, really think they should.

But that’s up to every individual to make that decision for themself.

Read this story and let us know what you think…

AITA for telling my friend that getting married doesn’t mean they’re ready for kids?

I work as a waitress. Jim is not Leah’s bio dad. He hasn’t been in the picture since he found out I was pregnant. My friend Sam (32f) married Kyle (36m) a month ago. Sam works as a school administrator. Kyle manages a warehouse. Fake names.

We went to dinner. We’re planning our wedding for 2023 and wanted to hear what it was like being newlyweds. They were going over everything when Sam mentioned children. She said they were excited about trying for kids. I asked her what she meant, and she said that now that she has a house and is married, she can finally start, which they have.

I told her having a house and a husband didn’t mean she shouldn’t have started. Tbh, I wasn’t aware she wanted kids. Her wedding was childfree and she never jumps in to conversations in our friend group when the topic is about kids.

She said she wanted to bring kids into the world when she had a healthy relationship and a house with a yard for them to play in. She said the house they have now and moved into last year is big enough for 2-3 kids.

I said being married doesn’t mean the relationship is healthy. She said hers is and I told her it is now but divorce rates are high and that if they split, she’d be on her own.

Kyle said that I was assuming too much. I said I wasn’t but they should think about what if it doesn’t work because that’s what happened to me. I went on to say that I love Leah but no amount of planning could have prepared me to be a single mom. Sam said, “Well, I’m not you” to which Kyle muttered “Thank God”.

Jim told Kyle to be respectful. Kyle said he wasn’t the one being disrespectful at the table. I said if my comments hit a nerve so easily then maybe it was a sign that they knew I was right and had a point.

I told Sam I do not regret Leah to which she said, “No, but it certainly sounds like you regret the timing.” I said the timing was fine and that I was doing fine caring for Leah, but then Sam brought up my financial issues I was having with my job. I told her not everyone can go to grad school and work when they have a family and a relationship.

Sam was single for 3 years before meeting Kyle. Sam told me that was her point, that she had different priorities than me, and that’s why she is where she’s at and I’m “stuck” where I’m at.

The check had already been paid, so Jim said we needed to get home to relieve the babysitter. I’ve told our friend group what happened and they say that it was my fault for criticizing Sam for her choices, but I wasn’t. One friend thinks Sam went too far with her comments about regret but agreed that I sounded jealous of Sam (I am not). Jim’s family and my parents agree with us, though.

One reader said the woman who wrote this post has some pretty warped logic. 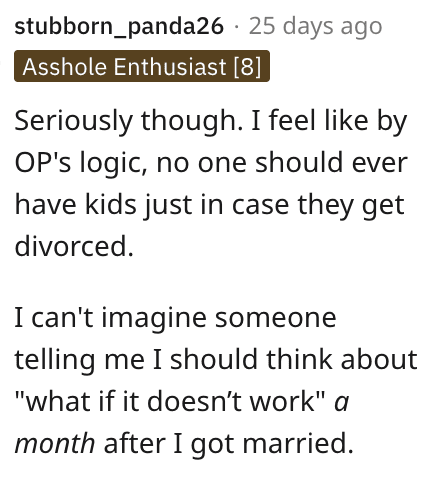 And another Reddit user who has some experience in this field made some good points. 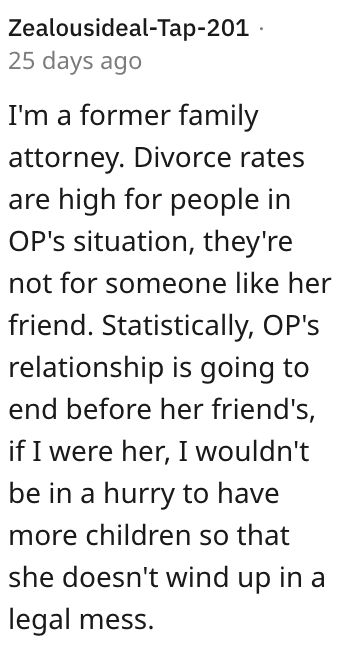