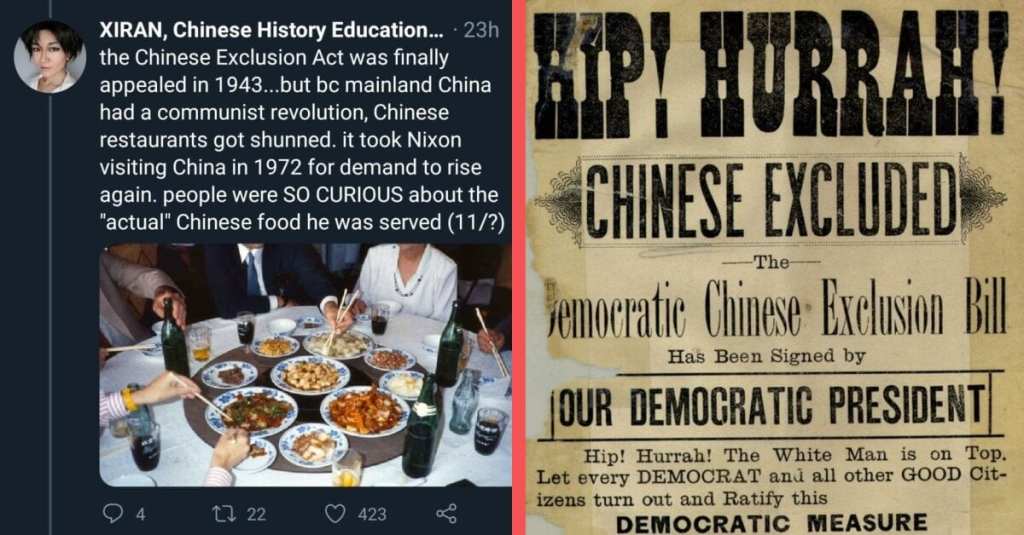 But sometimes Chinese American food gets a bad rep. Some would call it “inauthentic” compared to the sort of meals you’d see people consuming in China, but this Chinese History Educational Memer is here to set us straight.

If you take moment to look at the history of Chinese American food, you’d see that there’s nothing inauthentic about it.

Chinese American food was created by Chinese immigrants, utilizing the ingredients and skills they had at their disposal.

It’s pretty amazing something born of necessity could become such a popular American staple today.

It must have been difficult for these men, so far from home, learning how to cook for themselves for the first time.

I wonder if the fact that these immigrants were from Toishan, Guangdong, where the tastes skew notoriously sweet, is why so many Chinese American dishes are sweet today? 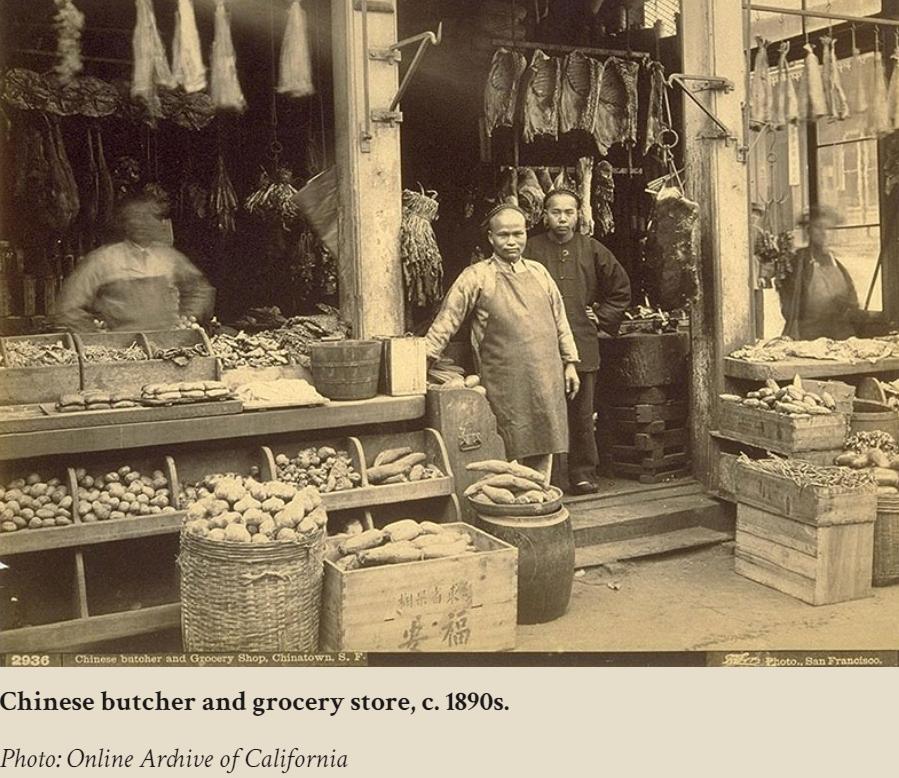 Yikes, I don’t know if I could cut it as a butcher.

I love eating meat, but I don’t think I’d like to spend much time chilling underneath it as it hangs from the ceiling.

Little did they realize, their improvised dishes would become SO popular.

Seriously, I could eat Chinese American food every day. 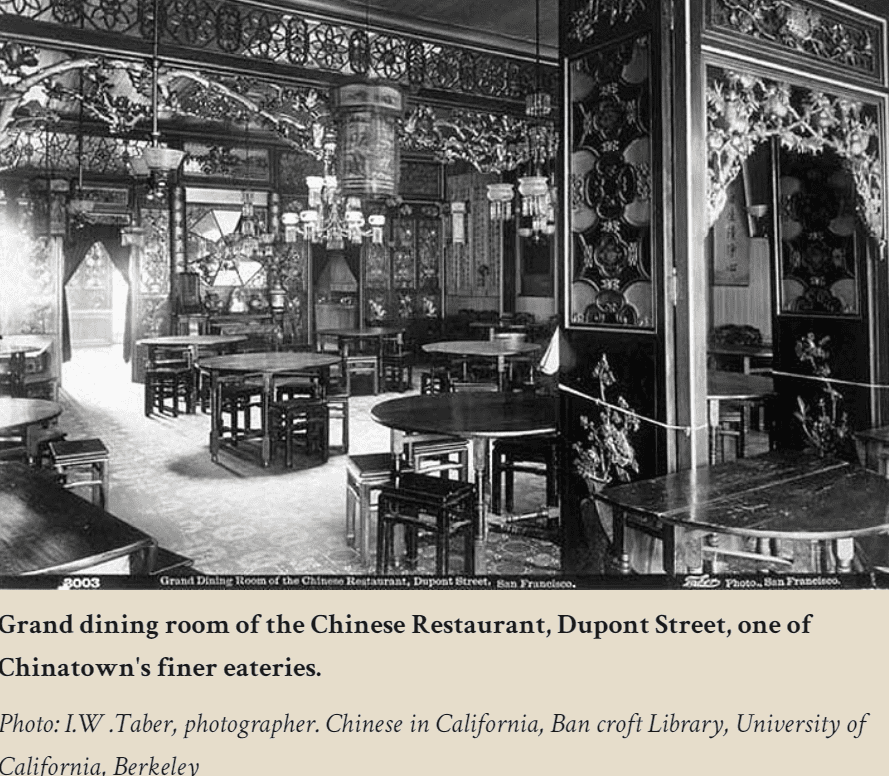 Table for two, please! This grand dining room is #lifegoals.

And yet fear and xenophobia prevented some Americans from giving Chinese American food a chance.

Enter the 1882 Chinese Exclusion Act, not to be confused with the Immigration Act of 1882.

While Chinese immigration was restricted, European immigrants continued to pour in.

This is because America viewed European immigrants as “desirable.”

WOW, this flyer is cringe-worthy.

“Hip! Hurrah!” It would be laughable if it weren’t so horrifying.

Can you imagine how Chinese Americans living through this felt?

The 1882 Chinese Exclusion Act didn’t just ban immigration from China. It created an atmosphere that allowed and empowered legal discrimination against Chinese Americans.

As uncomfortable is it can be recognizing the racism and discrimination of our past, it’s important we remember these moments in history so that we can prevent them from happening in the future.

Up until this point, I never realized why the owners of the laundromats I’ve seen in movies and TV shows were so often Chinese-American.

As someone who’s worked in the food service industry, I can attest to how rigorous the work is, but I can’t imagine how much harder owning and running my own business would be while also facing such discrimination.

In the 1860s, it was the Chinese Americans who built the transcontinental railroad. Chinese immigrants were seen as cheap labor.

But once the Gold Rush ended and the Great Depression began, jobs in America became scarce.

Ok, so I’ve never eaten Chop Suey, but according to my mom, my grandmother was obsessed with it. Maybe a love of Chinese American food runs in my family.

If you do a quick Google search, you’ll see it doesn’t look bad! I can understand why people went nuts for it, although, it’s probably undergone some changes since it was first invented. 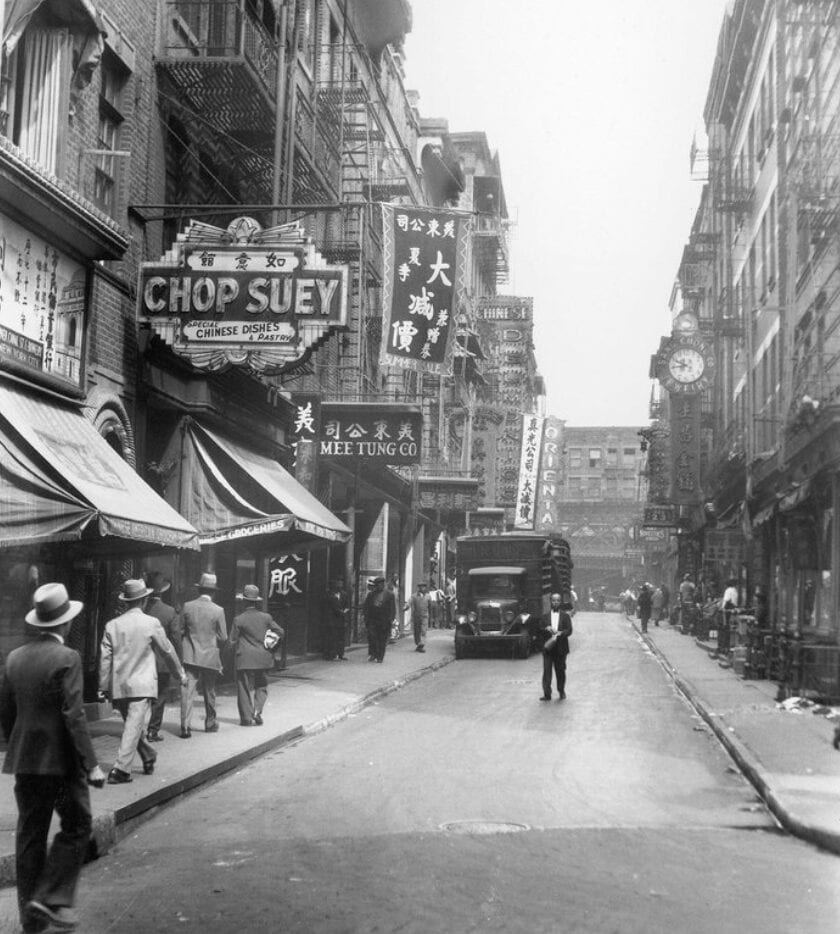 These ‘gents know a good thing when they see it.

I am that white person shouting “YEAHH! CHINESE FOOD! WHOOO!!!”

Luckily, the culinary talents of these Chinese American restaurant owners were more powerful than the discrimination they’d been shown.

The Union imposed FINES on union members who ate at Chinese restaurants!?

I would say I can’t imagine something like that happening today, but it’s 2020.

Nothing would surprise me at this point.

Boy, this picture is making me hungry.

And yet, once again, Chinese Restaurants were shunned. I’m starting to see a pattern here…

Think about that the next time you’re enjoying your General Tso’s.

I have always wondered why there always seems to be one or two Chinese restaurants in every small town.

As a Midwesterner, I’m thankful. I don’t know what I’d do without access to steamed dumplings and those fried dough balls coated in pure sugar.

Gimme all your fried chicken balls. Sweet and sour, orange, almond, Kung Pao—I could go on.

Without the innovation and creativity of these Chinese American restaurateurs, we wouldn’t have any of these comforting dishes.

It may not be the exact same food that citizens of China eat on a daily basis, but it was created by Chinese immigrants.

You don’t have to tell me twice.

What’s your favorite Chinese food dish? Let us know in the comments!