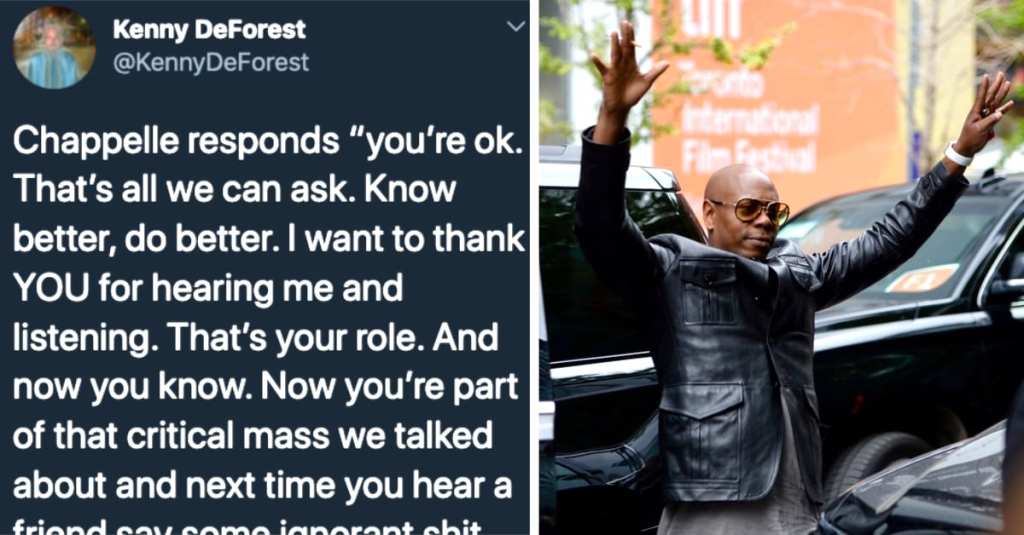 For the past few weeks, protests have erupted across the country marching against the unfair treatment of Black people by law enforcement. While police brutality in the Black community is not a new phenomenon, the topic was brought to the forefront after the death of George Floyd while he was being arrested by Minneapolis police officers.

Comic Kenny DeForest recently shared a Twitter thread about the time his good friend Dave Chapelle made a surprise appearance at the Knit in Williamsburg, Brooklyn back in 2015. Instead of his usual set, Chapelle took the opportunity to educate the audience about the complicated history between Black people and police.

It was an eye-opening experience and many in the audience appreciated how Chapelle broached the difficult subject.

We start the show thinking he MIGHT come. A couple comics in, he sneaks in like a boxer with his hood up. We’re in the green room smoking, drinking & joking. The dude is a machine. Every topic that came up, he had something profound for. We bring him up last, the crowd LOSES IT

He’s asking for topics and riffing perfectly. Then someone shouts, “Police brutality.”

Protests etc were all over the city. Tensions were high. About 15-20 min min to his set he asks for another topic & someone shouts “police brutality!” He pauses then says “you really wanna do this? Ok.” He chugs his Tecate and sets it down. Our crowd was always beautifully mixed.

The audience is mixed and feeling good. But the tone of the show changes.

So Chappelle starts talking about Eric Garner and wathching him get murdered in cold blood on camera and how it makes him scared for his children. I remember he said “I thought body cams would help, but what good is video evidence if y’all don’t care?”

Chapelle knows his history. He patiently puts the white audience members in their places.

He starts educating the crowd on the history of black people and the police. He talked about slave patrols and Rodney King and Watts and Emmett Till and Black Wall Street. He talked about Trayvon Martin, Michael Brown, and he talked about John Crawford III

John Crawford III was killed for looking at a BB gun for sale inside a Walmart. There was very little media coverage over the incident.

Some scared cracker-ass called the cops, and this officer comes in, doesn’t even bother saying “drop the weapon” or “hands up” and just guns him down. The security footage makes it plain as day. The footage will make you sick. Disgusting and outrageous in every conceivable way.

Then Chapelle tells his own story about getting pulled over by law enforcement. He didn’t know what could happen to him.

He says “the cop approaches and he can tell I’m nervous. I have both my hands on the wheel and I say ‘officer my license and registration is in the glove box. I’m going to reach for them now. I’m promise not armed’ I could tell the officer was offended that I was nervous. He said

This was the same officer who would later gun down Crawford. Then, Chapelle goes further back in time to South Africa’s reckoning with racism.

He goes on to explain that one of his best friends is South African. He said “I asked him what it was like in South Africa right before apartheid ended and he said it was chaos in the streets. There were riots & car bombs etc, but the amount of people caring hit critical mass…

Later, the white girl with the hat wanted to meet him. Chapelle was glad to have her come back.

After the show, we’re in the green room. @joyellenicole comes back and says “that dumbass white girl wanted to talk to you, but I told her you were busy” and he goes “no, bring her back” so Joyelle leaves and comes back with wide-brim hat girl and her friend.

She admits her eyes were opened to the true and inexcusable racism Black people deal with on a daily basis. She wants to be part of the change for good.

Chappelle responds “you’re ok. That’s all we can ask. Know better, do better. I want to thank YOU for hearing me and listening. That’s your role. And now you know. Now you’re part of that critical mass we talked about and next time you hear a friend say some ignorant shit like…

He has taken his time and energy to educate her and the rest of the audience.

So gracious. A class act.

She says “really?” And he says “of course! Friend get over here for a picture” the friend approaches, they take photos, he hugs them both and reiterates that it’s ok and just to be part of the solution and sends them on their way. CLASS. I couldn’t believe what I witnessed

He inspired his audience to be part of the critical mass.

And you can always become a part of the critical mass trying to push this shit forward. All you have to do is care and allow that care to become education and action.

There’s never been a more perfect time than now to post this thread. I think Chapelle would approve.

I’ve been sitting on this story since January 19, 2015. I wanted to respect his process and not burn any material for him. But, since he’s released HOURS of material since then I think it’s safe to say he won’t be using any of this bc he’s a genius who can just come up with more pic.twitter.com/48gxh82cNu

Fans of DeForest and Chapelle recalled being there that night.

It even inspired some great art.

Chapelle uses his personal story to encourage the “critical mass.”

It can’t be easy to talk about his experience over again, but he does it to be part of the solution.

I saw him a year after Ferguson, and it was his last show of the four days he was here in St. Louis. He told the exact same story about the cop. It’s one of my favorite story’s to tell people about. He sat down for an hour after his set to talk to the crowd.

If you remember his Chapelle Show, you may remember how funny it was but also how smart.

Nothing was off limits.

I was at this show and lost my mind that night when he came thru. His entire set that night opened my eyes and we were all stunned silent. A true genius and deep thinker… well ahead of the game.

Chapelle is a brilliant comic who makes you think. One of the best parts of this thread is hearing his voice throughout.

People, let’s start caring and get this critical mass moving!