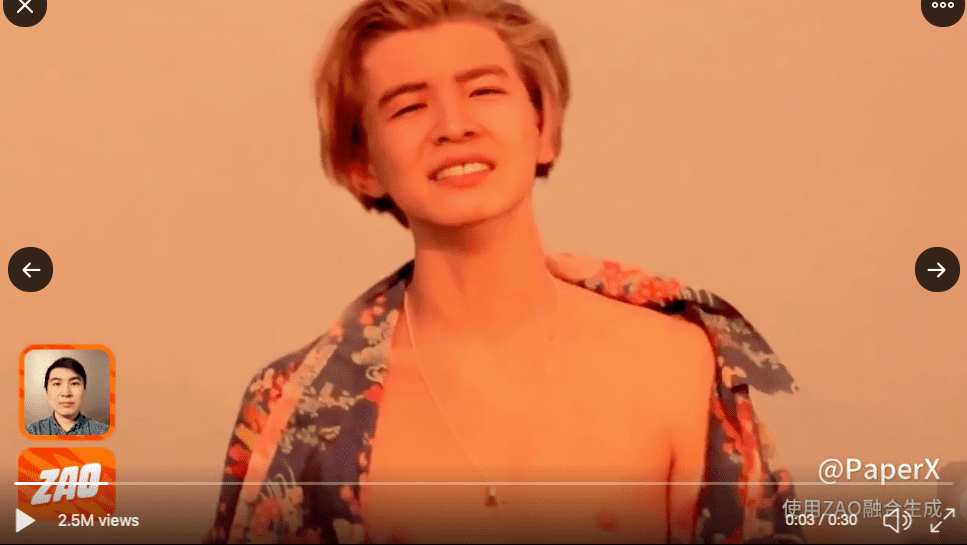 Deepfakes are part of the latest and creepiest wave of new technology. Though they don’t seem to be especially helpful to anyone, deepfakes nonetheless look like they’ll be around for awhile.

Now, it’s easier than ever to produce your own deepfake (yay) with an app called Zao, created by Chinese developer MoMo.

According to Insider, the app topped Chinese iOS download charts after its recent unleashing.

If you didn’t know, deepfakes are bizarrely realistic CGI videos created by an algorithm. Deepfakes can be silly, like putting Nick Offerman’s face on every character in the Full House opening credits. But the scary thing about deepfakes is that they could also be used to falsify the words or deeds of an innocent person.

Now, with the touch of a button.

In case you haven't heard, #ZAO is a Chinese app which completely blew up since Friday. Best application of 'Deepfake'-style AI facial replacement I've ever seen.

Here's an example of me as DiCaprio (generated in under 8 secs from that one photo in the thumbnail) ? pic.twitter.com/1RpnJJ3wgT

Indie game developer, Allan Xia, created a video of  a deepfake of himself as Leonardo DiCaprio in some of his movies. He shared the video to Twitter, where it quickly went viral because of how realistic it was. The program read one photo of Xia and paired it with DiCaprio’s facial expressions and mouth movements. Xia noted he only needed one image of himself and about eight seconds to create the deepfake.

Despite Xia’s achievement with the app, he also noted its potential dangers.

It’s clear that #ZAO isn’t really going for "accuracy" per se, but rather a "subjective" good looking result. Similar to a beauty cam, it retains facial structure of the original actors, so the cherry picked results more or less always looks good and encourages users to share.

Is the intent purely to entertain?

I can totally see this being applied in Films/ TV, imagine logging into your Netflix or Disney+ account – watching the latest TV show/ Marvel movie, where a stand-in actor's would be auto-replaced with your own.

The newest member of the Avengers is….YOU.

Will it be used to bombard us with images of ourselves for marketing purposes?

Pretty soon corporations will start advertising to you using your own face.

Others on Twitter posted deepfakes of themselves as cast members of TV shows and movies.

Chinese viral deepfakes app #ZAO Clip of myself as Sheldon generated in a few seconds from a single picture. pic.twitter.com/JI7MqWUDu6

Me risking my face rights to test out #ZAO so ya'll don't have to. The image I used is one single normal selfie that you can see in the bottom left of the image.#thefuturescaresme pic.twitter.com/RjtK8ZWPq9

The app’s developer, MoMo, is also a large social media platform in China. They have already been banned on WeChat due to a line buried in their usage terms that retains “free, irrevocable, permanent, transferable, and relicense-able” access to all content it is used to generate.

So, they can own your face.

China’s expansive surveillance network already uses manipulated images of people, for which it has received criticism from both inside and outside the country.

Thankfully, you must have a Chinese phone number to download Zao, and if you don’t live in China, Zao having ownership of your face is not necessarily going to mean anything practical to you. After all, Facebook can use any of the content you’ve uploaded for whatever they want, too.

Xia has been microblogging about the app and disturbing impacts, both real and imagined on Twitter.

The future, it turns out, is creepy.