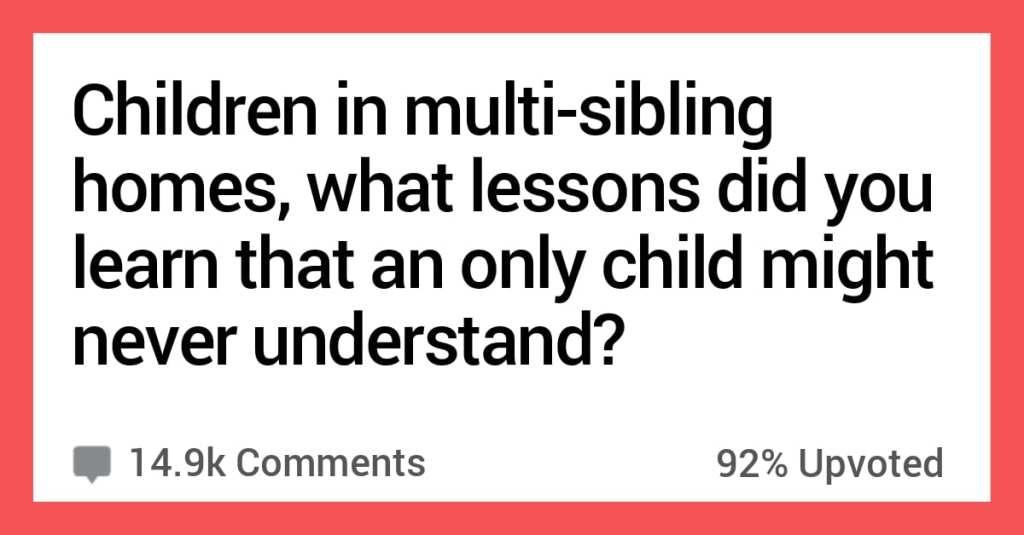 Growing up in a big family was a lot of fun. Definitely hectic at times, definitely crowded, but there was never a dull moment. Looking back on it, I don’t know how our parents didn’t want to give all of us away.

But you can learn a lot of valuable lessons from your siblings – if you’re lucky enough to have them. In this AskReddit article, people share the best lessons they learned while growing up in a household with multiple siblings.

1. Being the remote master is crucial.

“When you’re getting food in the middle of a show, carry the TV remote with you.”

2. There is an unspoken code.

“As the oldest child: because you get there first for everything, you may be punished more or less severely than your siblings for the same offense. This will piss off every other sibling.

Also there is an unspoken code of “if the parents weren’t home when *object* broke, nobody saw it break.”

They’ll try to prisoner’s dilemma all of the kids. The more expensive and/or difficult to replace the object, the less any of the kids saw anything.

Even if it could be proved that everyone was in the room when the item broke, nobody saw it happen.

Why? Because this time you’re covering for your sibling. Next time they will cover for you. It is a bond that will only be broken once, because if it does break the next time the kids are alone the snitch is gonna get it real good.”

3. Work together if you want to live.

I have a bunch of brothers. My dad early on would punish you if caught in the wrong, but if you were tattling you got double. So instead of telling on each other we worked together to stay out of trouble.

It made my mom mad when she demanded who did something. She would threaten to punish all of us if one of us didn’t confess. We all maintained our silence and accepted mass punishment. Afterwards, me and my brothers would talk over how we got caught, what mistakes were made and how to avoid it in the future.

To this day we are all very close, and though we are all scattered around the world, we still talk 3-4 times a week.”

“How to act completely ignorant of what happened. “Where was your sister?” Mom asks. I say, “I don’t know, I was asleep in my room the whole night.”

In reality, I was awake playing video games with a walkie talkie keeping tabs on her the whole time and letting her know when I hear anything downstairs and I told her to come home when I heard our mom go to the bathroom, so she’d be in the yard when mom went looking.

The art of blackmail.

Camaraderie and having tons of time to hatch plans and build stuff.

Learning to deal with and enjoy people you don’t choose to be around because you don’t pick your siblings or their personalities.”

“Speaking as an older brother, you bully the younger ones to keep them in line.

But you also protect them from other bullies because they’re a valuable resource – they’ll have your back if you have theirs.

They can back you up in a fight, back your story up to the parents, take a share of the blame, and are pretty reliable if you need some minor thing taken care of.

It’s basically gang leadership 101 – managing your street level guys loyalty without letting them get ambitious enough to try to take you out.”

“It doesn’t matter what YOU want to do!

So many only-child friends seemed to dictate the entire household. If kid wanted to go to the beach, they went to the beach.

I didn’t even get to pick whether I wanted McDonalds or Burger King for dinner- my mom was picking which one she wanted so she didn’t have to listen to us bicker.

Also, if your younger brother eats random things, you aren’t allowed to have marbles in the house. Doesn’t matter that you’re not some moron who eats inedible objects, your brother is a moron, so you suffer.”

7. Learn the art of negotiation.

Nothing like rallying your siblings to your side when you have a common enemy (normally mom) and then negotiating the distribution of the result of your efforts.

Am the only girl and the baby. Set me up well for my career negotiating with angry dudes all the time.”

“My parents couldn’t keep the names straight between us, so I got called my sister’s name, the dog’s name, the neighbor’s kids name…

They’d also combine our names so when they called us they were somewhat right all the time.

“How to argue without going for the jugular. I’m oldest of four and we could argue, scrap and wrestle without causing much damage no matter how angry we were.

Even now, we’ll disagree but get over it immediately without being hurtful. You need that skill to survive in a family and indeed, the world. My ex was an only child without cousins and was horrified by fighting of any kind, but when he did get into it he was the nastiest, cruelest most vicious person.

He’d say some truly awful things without seeming to realize he’d have to live with these people or in that community after the dust settled. He never learned to play fight or about boundaries and was unable to understand our sons rough and tumble. He’d Wade into any kind of light-hearted, laughing wrestling and stamp it out. It took me forever to teach him that all children need to learn how to argue and even physically scrap in order to learn boundaries and respect for each other and themselves.”

“When “You can hit me back!” is not effective, you have gone too far and actually owe an apology. Or you’ve created a manipulative psychopath, in which case you owe an apology to the world.

You actually won’t know which it is for years.”

“It’s all fun and games till you hurt your sibling.

“Eat it now or it won’t be there when you want it later.”

“The opposite sex is no great mystery when you’ve got mixed sibs.”

“If one of your siblings is getting in trouble, just keep your mouth shut so you don’t get sucked in.”

If the age gap is not too big.”

So… any siblings out there? Have any hilarious stories you want to share?