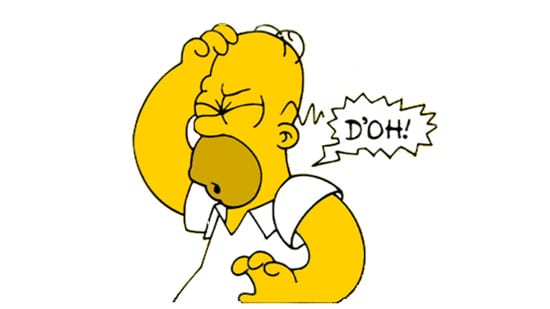 Uh oh…we’re all about to feel REALLY stupid here for the next few minutes.

Because even though these stories are from AskReddit users, you know you’ve been there, too.

So don’t even try to deny it.

“We bought a nice liquor cabinet. We got it delivered and noticed it was a bit shorter than we thought. No biggie. Three years later, we’re moving. Lift up cabinet and these beautiful, ornate, screw on legs wrapped in tape and bubble wrap fall off the bottom. Looks so much better now!”

“It wasn’t very long, but when I was learning to drive my dad was explaining the rule of thumb regarding a safe distance to be behind the car in front of you. I thought it meant to hold your thumb up and if your thumb didn’t cover the entire car you were too close to it. When he caught me doing that he asked me what I was doing. When I explained he burst out laughing, then considered it, and concluded it wasn’t a bad idea but perhaps a bit distracting.”

“Until last week, when my father in law would made a phone call on his very basic non-touch-screen flip phone he would open the menu, scroll to the phone icon, open it, hit the soft key for contacts, scroll to the person he wanted to call, press ok, then press the soft key to call.

When he mentioned how he preferred his landline because he could just dial the number, I said “Humour me. Just dial the number and hit the talk button.” I’ve never seen a man so simultaneously grateful and embarrassed.”

“Couple years ago i was trying to open some toothpaste and had to break the seal of the tube, i used to look for something like a nail to break it, then one day i looked at the pointy end of the cap and thought ‘what if I could use this to break it’ and oh shit it did fit and broke it effortlessly, and so did every other tube product i had in the house and their respective cap, my mind was blown.”

“My mom has been pronouncing Massachusetts “Massa Two Shits” for years and no one corrected her because they thought she just had strong feelings about Massachusetts.”

“I owned a car with swivel headlights and it was very nice to have that. Discovered three years in that I had never turned on the swivel feature.”

9. That took a while

“Last month was the first time I discovered lint rollers were peelable. Literally sat there for a minute to take that in.

“My name is Ryan.

It took me until I was in 1st grade to realize my name wasn’t in the alphabet.

But nope. It took that long to realize the alphabet didn’t go “W, X, Ryan Z….”

“Apparently the red ring around the bologna is not supposed to be eaten.”

“When I was 5 a Pizza Hut employee told me that the powder on the breadsticks was called ‘fairy dust.’ Ordered extra fairy dust on my breadsticks until I was around 14 when an employee said ‘do you mean garlic salt?’ It still devastates me to realize how obtuse I was.”

“Realized the multi colored tape measures glued to the door frames of gas stations etc. are for identifying robbers, not for measuring yourself as you walk out. I mean, they can be, but that’s not why they are there. Unless you’re the robber.”

“Not mine, but my dad has been spelling his name wrong his whole life (he’s 51). His name is Jeffrey, and he’s been spelling it like that since he learned how to spell his name. A few months ago my mom pulled out his birth certificate, and we all learned it’s actually spelled Jeffery. Not sure if he spells it correctly now, but it was definitely an “oh shit” moment for him.”

“When i first got a debit card and would go out to eat at restaurants with my friends, i would leave a cash tip on the table. when i got the receipt to put how much i was paying i would write down how much money i left on the table. for at least 6 months i gave double tips to every waitress i had…”