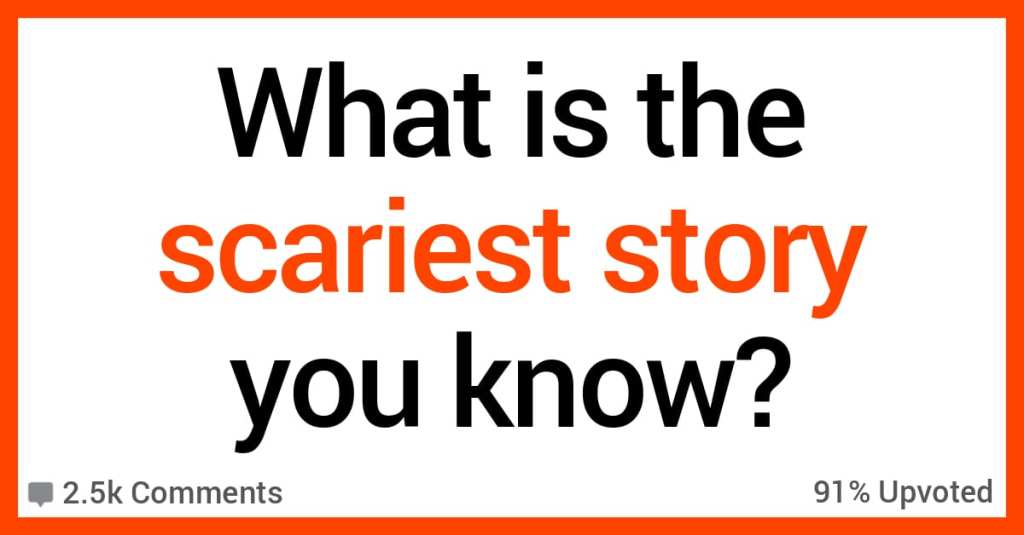 We all know a scary story or two, whether we’ve experienced them ourselves (eep!), they happened to a friend, or we read or watched them as they were spun by a professional of some sort.

If they’re truly creepy, then we also love to share them – because who wants to be scared alone – and these 10 stories are bound to get your heart rate up, at least a little.

The last man on Earth sat alone in a room. There was a knock on the door.”

My heart is full, I’m your new best friend even though we haven’t known each other long. Your loved ones will also get to know me as well which I am so excited about. You may not always see me, that’s ok – I always see you. I promise I will be with you through thick and thin. You let me in, I love you too.

I’ll be with you when you sleep and your co-pilot when having drinks with your mates. I’ll sit next to you in church and we’ll give thanks for each other. You’ll always know I’m with you and I am so devoted to you. Yes, I’m more famous than Brad Pitt but that doesn’t bother you. When I’m around you I feel like an Oscar winner.

Looking forward to seeing you more often this year

The slit-mouthed lady. This is a Japanese legend.

There is a lady who was married to man.

She was accused of loving someone else and it was true.

She loved someone else and was about to divorce her husband.

So he grabbed a knife or scissors and cut her mouth wider.

He later on regretted it so he stabbed himself to death.

People say that if you are walking alone, you might find a woman with a surgical mask.

She will ask , Am I pretty.

If you say yes, she will cut your mouth like hers.

If you say No, she will kill you with her weapon.

In order to escape her or distract her is to either say she looks average, or to distract he with money or hard candies.

Almost every time i go to see my Gramma, she tells me one story that happened to her

She was coming home from work one day and she saw something on the road. it almost looked like a person wearing all black, she couldn’t see his face. So she gets out of the car and hesitantly walks over to the man and says, “sir? are you alright?”

The man stands up and towers over her. He’s around 7′ maybe. The man tells her, “someone you love is going to die in 3 days, 3 months, or 3 years” and he disappears. completely dumbfounded and shocked, my Gramma gets in her car and speeds down the road, and returns home that night.

3 days later, my grandpa died. Drowned in a quarry.

6. Why are they always wearing sailor hats?

I was in my old school with some friends, and then we saw a little blue ghost in the hallway.

He had no legs, just the face of a boy with a sailor hat and a white shirt, with the little sailor cape thing.

So i woke up in some kind of dark grey room with a few cages, as a girl (idk why?), with an old fashioned police officer and some other men. It came out all of us woke up here and didn’t remember anything. then we hear a creepy as giggle from above, and a doll fell one on of the men, and started ripping him like paper, then throwing the body (it looked like person made out of some ripped up mummy but with flesh).

It happened to the rest, but i managed to survive. Then the doll went in the cage with all of the bodies, and they started sticking to it, makin a giant man with long arms and pointy fingers. then me and the thing teleported to some kind of gate and thing started breathing loudly and pulled its hand towards me.

I woke up and started crying, but then i heard the deep breathing again, and couldn’t move or breath. came out it was my dad breathing! (i was sleeping in the same room as him and mom)

4. That is terrifying – and inescapable.

Freaks me out every single time.

3. Only reasonable course of action.

So I was probably around 5, 6 1/2, I had this cinderella doll and a doll that looked like a twin of Annabelle. One night I was cleaning my room, I put the Cinderella doll in my closet. I closed the door and continued cleaning all of a sudden I hear this giggle, now yes the doll makes noise but what freaked me the most out was there weren’t any batteries in the doll.

I ran downstairs crying and told my dad what happened, the next day we got rid of it.

Now I’ll tell you the story with the Annabelle doll. So this happened probably a week after the Cinderella one. I was watching Netflix on my dad’s tablet and as im doing that I see in the corner of my eye this figure of a little girl playing.

I look up and she’s looking at me, by now I freaked the heck out, I stand up and ran as fast as I could to turn on the light and bam she was gone. I put the “Annabelle” down on my bed and ran downstairs. When I came back up the doll was gone, she was about 1ft bigger than me so it was kind of hard to lose, I looked everywhere but never found her until one day…

I was outside and I had to take a bath cause I was dirty for playing in the dirty, muddy rain. I came inside took a bath and went into the room, she was laying on my bed, I went to go say thank you to my mom and dad for finding her. But they said they didn’t find her.

It freaked me out so bad we didn’t get rid of her, we burned her.

Lived in a house where:

Stomping up and down hallway most nights

Female flatmate saw people staring through her windows twice. (She only lasted two weeks in the house)

My alarm clock which didn’t work (used it to tell time, not wake me up) would start blaring then turn off as soon as we walked in the room

NOBODY could sleep in the lounge; rugby playing manly men would end up on the floor in somebody’s bedroom, or walking home

The neighbours congratulated us when we lasted three months – we’d been the longest tenants in years. Although a lot of folks that lived with me didn’t last long either.

It was eventually knocked down years later but construction of flats stopped half-way thru.

This is a true story.

My friend got her foot stuck in the toilet (don’t ask) my boyfriend peed into the toilet and flushed the toilet the nail of her big toe came off it was scary, disgusting.

We called the the fire brigade they took the toilet off the wall and ambulances my friend to hospital.

I am no longer with that boyfriend.

Happy to have found these weird little tales, how about you?

Link us your favorite scary story down in the comments!