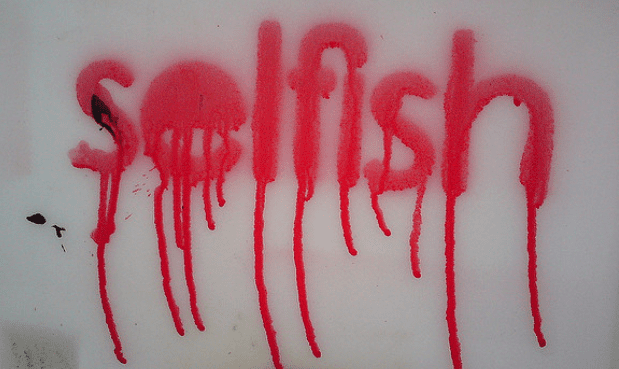 Do you consider yourself a selfish person? Maybe other people in your life do? Friends, family, co-workers?

Some things are undeniably selfish, but then there are other things that are definitely debatable.

In this AskReddit article, people share their opinions on things people consider selfish but they don’t.

1. Out of your hands

“Acknowledging that you don’t have the power/resources to care for a loved one and seeking help from a nursing home or adult protective services.

Dementia is no joke and it can slowly kill the souls of the family as well as the person suffering from the disease. Caregiver burnout can lead to psychoses, heart attacks, strokes, and suicide. These diseases can cause sufferers to become abusive and violent. The commercial ideal of the well-kept grandma who occasionally forgets things is so, so far from the truth for many families.

It’s sad and causes so much guilt and anguish, but that’s the reality we must live with.”

“This may be a weird one, but not “letting people help” when I did not request help, and offers of help were politely declined.”

3. Sometimes, you have to say no

“Telling your family “no” when you feel you have maxed out your contribution to whatever cause they are campaigning. Especially when their methods of negotiation include applying guilt.”

5. Take care of yourself

“Limiting contact with a friend whose issues are now affecting your own happiness. You have to look out for yourself, too.”

“In high school one of the students in year 12 died and his friends were selling bracelets(I think) to raise money for his funeral. I couldn’t afford one (they were like 10 dollars) as I was in year 9 and jobless without spare money. Anyway a lot of people were upset with me because I didn’t have a bracelet for someone I didn’t know and money I didn’t have.’

“Saying no to people. you don’t have to always help people if it will spread you too thin. Self preservation is a thing.”

Sometimes it’s insanely healthy to be with yourself.

Sometimes the timing doesn’t mesh with others’ lives.”

“Cutting off toxic family members/in-laws. I have cut my narcissistic abusive sister out of my life and I am in the process of cutting off my mother-in-law. Life is too short to allow abuse into your life because your abuser is a family member.”

“Not giving money to family members. My longtime gf’s family always asked her for money and I had to reassure it is okay not to give it because we have our own bills. BTW between the both of us her mom, brother, and sister have received money at one point in time.

I am almost positive she has paid them more than I know, not my money, but they try to guilt us because we are in a better situation (we save a little after bills) and will never pay us back.”

“Not catering to someone who says they’ll kill themselves if you leave them. They’re the selfish one for trying to put that mess on you, and you owe it to yourself not to break down over it.”

“I don’t think it’s selfish, but a lot of people in my life think it is. I’m a recovering alc*holic and I really don’t care that my friends still drink, I just ask them not to talk to me if they’re drinking because it’s hard on me. I have gone off on some “friends” and actually straight up cut some people out of my life that think it’s funny to drunk text me and send me pictures of alcohol and stuff because I’m the “drunk” of the group.

Nope. Screw you. You’re blocked until you’re sober and you apologize for being rude as hell. I’m not putting my sobriety at risk for your drunken laughs.”

“To my family apparently, just sitting contently in silence. Apparently I’m rude for not wanting to join in their inane conversations.”

“Being in your mid 20’s and having no kids/not wanting kids. I’m still a kid. I don’t have my spending habits under control. I love time to myself and silence. You think I’m selfish because I acknowledge I’m not ready to have kids and understand I’d be bringing a child into the world that I’d struggle to support?

Once I’m financially stable and further on in life, sure. But the whole routine of kids having kids needs to stop. Sort your life out, then think about starting a family.”

“You know that thing where you go out to dinner with a bunch of people, everybody orders expensive stuff and wine and desert, but you just order an inexpensive salad? Then the bill comes, and they decide to split it, and say you owe $235 for your inexpensive salad?

Me: “Hey, guys, I ordered a $10 salad, I’m not paying $235.” I guess that is not really selfish, just sticking up for yourself. What co-diner would be pissed if you said this? None. So, what I am saying, if this ever happens to you, speak up and don’t go with the program. No one will judge you.

Source: Happened to me once. Once.

So, for you youngsters, they say you should learn from others’ mistakes? Learn this one.

And, make double-damn sure you ask up front if you are paying your own way, or splitting equally, when you are first asked to go. That way, you can pass. That’s the other thing I learned and do. “Hey, is this a pay your own way, or split equal deal? I’m a light eater and don’t want to pay $235 for a $12 salad.” That’s what you say. In a joking way, but makes the point.

This is if you’re not going out for some important meeting with your boss’ boss’ boss. Or something like that. That’s a different situation.”