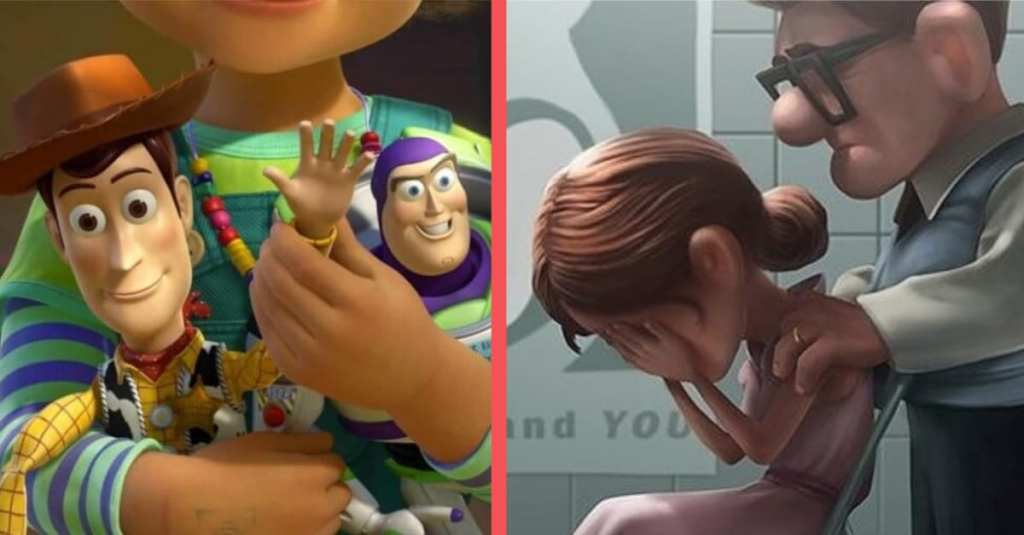 Disney is internationally known for its magical amusement parks and children’s movies. I myself am a BIG Disney movie fan. (I still have some of the originals on VHS tape!)

Some of these moments stick with us more than others. Grab your tissues, folks. You’re gonna need them as we revisit some of the best instances where Disney movies handled serious subjects beautifully.

1. Quasimodo is dehumanized and ridiculed because of his appearance, The Hunchback of Notre Dame: 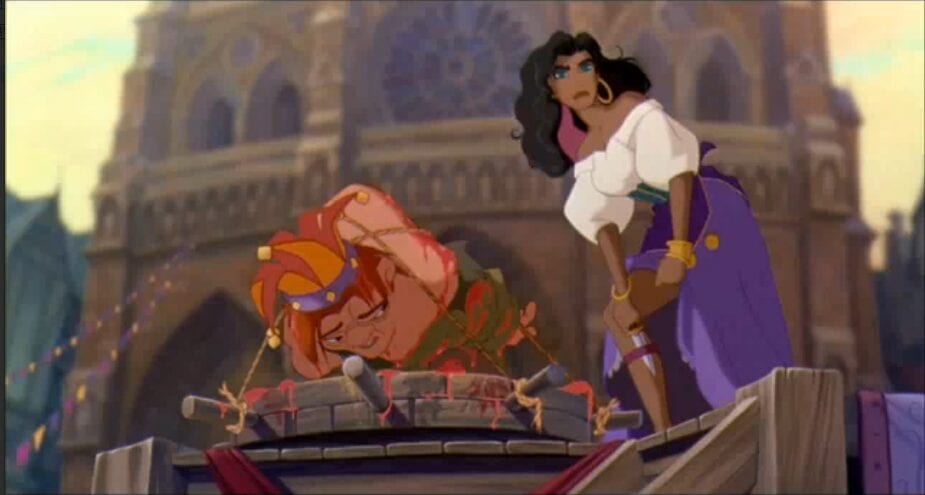 Disney’s animated interpretation of Victor Hugo’s novel is ripe with serious subjects, but the most painful moment to sit through is the scene in which Quasimodo is attacked by a mob.

His guardian/jailer Archdeacon Claude Frollo sits by as a crowd of malicious revelers tie Quasimodo to a spinning wheel and hurtle tomatoes and the like at his face.

Only when Esmerelda steps in does this horrible assault halt.

There’s a lot going on in this moment. It shows the fleeting nature of celebrity and humanity’s capacity for cruelty, but in Esmerelda we see bravery and compassion.

2. Riley’s depression, Inside Out.

Riley and her family have just moved to a new city, away from Riley’s school, her friends on the hockey team, and pretty much everything she’s known.

Moving is a major life stressor for anyone, but especially children, who have no real control in situations like this.

In the climax of the movie, Riley is unable to feel any emotions at all. Audience members see this as Riley being in a state of depression.

Depression is another common ailment that can be hard to talk about, even more so with kids.

Inside Out provides an example of how in moments of crisis like this, reaching out to the ones you love is the best step to take for your own health and safety. 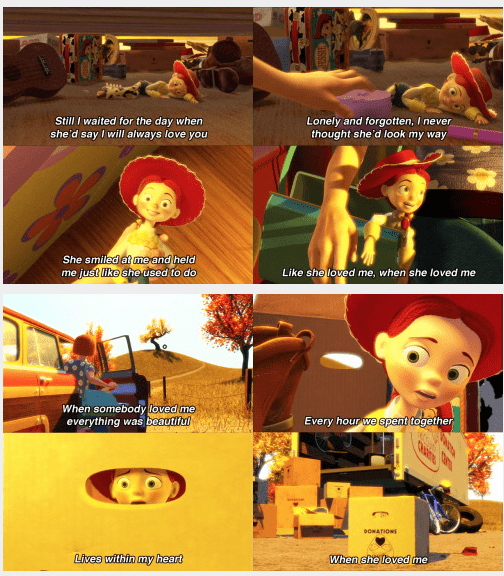 I told you to grab tissues. Cue the Sarah McLachlan. Who could forget Jesse’s heartbreaking song, “When Somebody Loved Me,” about the child who loved, and ultimately, left her?

Abandonment is another universal experience, regardless of age, and like every difficult experience, it can be even harder for children to process.

Luckily, we see Jesse chooses to put herself out there again, despite her fear, and learn that not everyone who loves you will leave you in a box by the side of the road.

4. When Coco remembers her family, Coco

In Coco, protagonist Miguel travels to the Land of the Dead, where he uncovers lost secrets about his family’s tragic past.

In this tender, emotional ending scene, our hero Miguel bravely defy his abuelita’s wishes, and sings “Remember Me,” to his great-grandmother, who at this point is almost completely non-responsive.

Little does his family realize, this is exactly the song Coco needs to hear to remember herself and her family.

Lilo is a great example of a child dealing with grief. Having lost their parents in a car crash, Lilo and her sister Nani struggle to rebuild their family unit.

Stitch (who is very much an alien, not a dog) is also dealing with difficult emotions of his own. He has no parents, no family, and vocalizes that he feels, “Lost.”

Together these two navigate their anger, loneliness, and strong desire to find “ohana” by creating a new, found family. 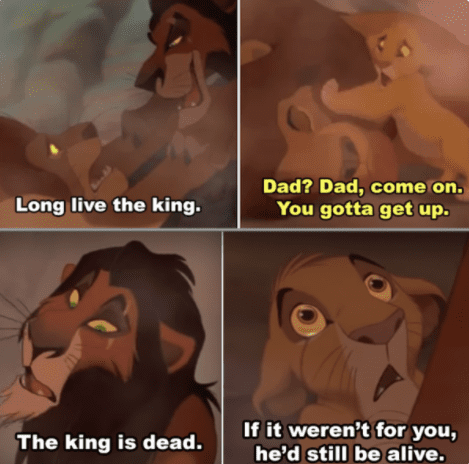 Few Disney deaths hit so hard as Mufasa being trampled to death in The Lion King.

Worst of all, we the audience know that his demise is not an unfortunate accident but a deliberate plot on the part of his brother, Scar.

We then see Scar convince little baby Simba that he is to blame. Not only do we see Simba processes the loss of his father, we also see him grappling with survivors guilt.

That’s a lot of one little cub to handle. 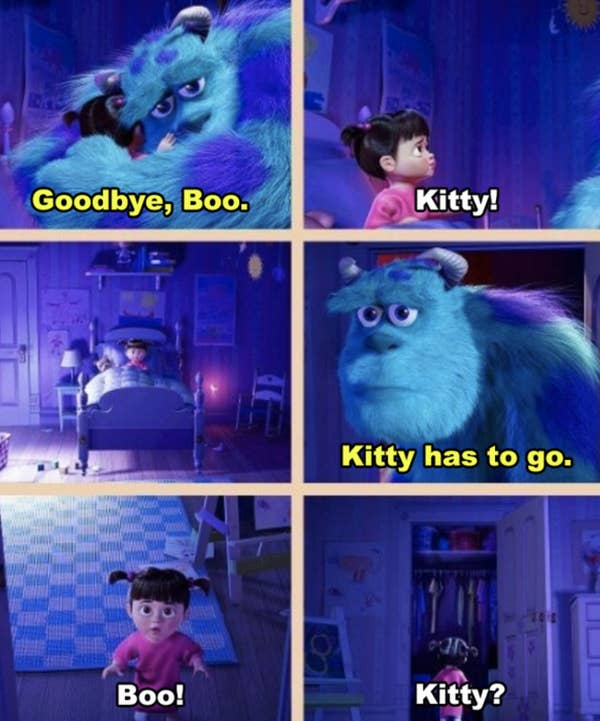 In this tear-jerker scene, we watch Scully give a final farewell to Boo, the little girl he’s grown to love as if she were his own.

Never has the word “Kitty” wrecked me so hard.

7. Ellie’s inability to get pregnant, Up

The story of Carl, Ellie, and their life together within the first ten minutes of Up is one of the most beautiful executions of animation and music I’ve ever seen.

We see the couple decide to try getting pregnant, prepare for a baby to arrive, and suddenly we see them receiving devastating news from a doctor.

While we can’t hear what he’s saying, the message is clear: Ellie will not be having a baby.

It is the only time I’ve seen a woman’s reproductive health addresses in a children’s movie, and for those in the audience who can relate to that moment, I’m sure it meant the world to feel seen.

Another Disney/Pixar classic with a heartbreaking beginning.

After being introduced to Marlin and his clown fish family, we very quickly have to say goodbye when a predator attacks.

From this scene we see that everything can be taken from a person, in the blink of an eye, but in the face of incredible loss, we can still find a smidgen of hope to latch onto. 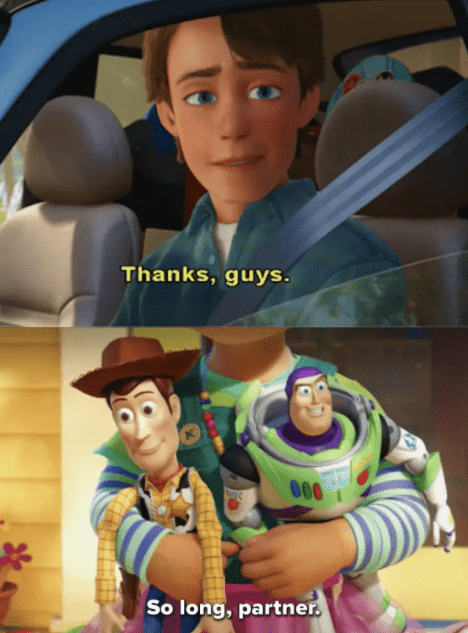 There are plenty of moments in the Toy Story saga that have left us in tears, but Andy saying goodbye to his childhood toys is the most heart wrenching of all.

Saying goodbye and moving on to new phases in life is an essential part of growing up, but that doesn’t mean it’s easy. Thankfully, Pixar gave us the most satisfying goodbye imaginable. 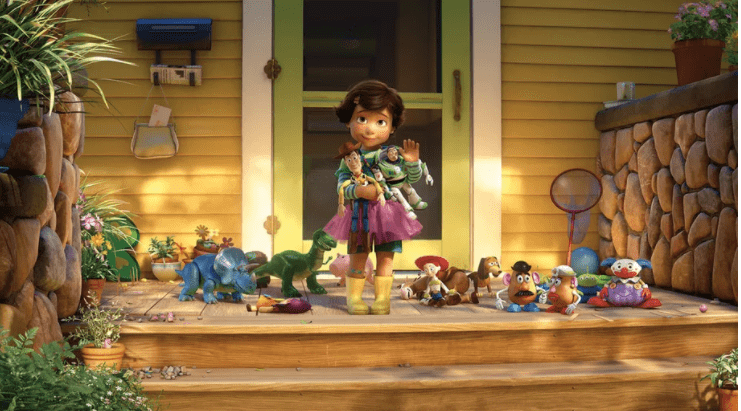 I don’t know if these emotional moments hit me as hard when I was a kid, but as an adult they slay me. I think Disney’s ability to tackle real human emotions is one of their greatest strengths. Instead of talking down to their audience, they create relatable characters who—although they might be toys, monsters, or animals—deal with very human problems.

Which of these serious Disney moments pulls at your heart strings the most?