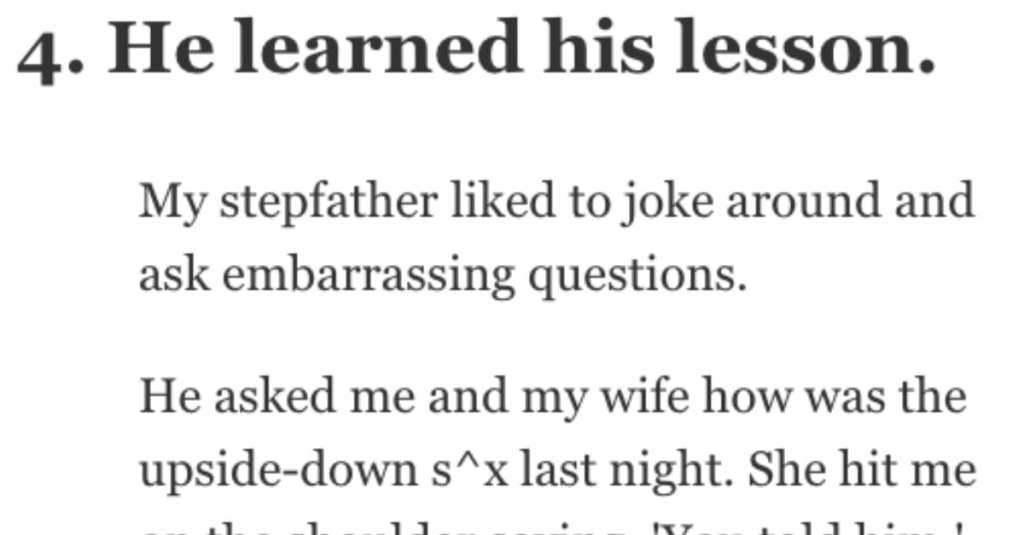 Human beings are awkward and clumsy, and we’re not honestly that great at social interactions in the best of times.

When we’re naked and fumbling and trying to act like we’re cool and have it all under control, things can get more than a little cringey.

And listen, we all have at least one of these stories.

The only difference between you and me and these 11 people is that they have the courage to share with the class.

Had s^x in a Mini Cooper — this was back in high school — and it started raining on the way to the car. My girl’s feet got muddy.

I woke up in the morning to my dad because he had to grab something from my car and asked why there were footprints on the roof, windows, etc.

My mother-in-law walked into the room to give us morning coffee…while I was under the covers giving my husband a bl*wjob.

I stopped when the door opened and stayed under the duvet.

She then tried to talk to us and asked why I was hiding. Most awkward experience ever.

Drank too much and woke up next to a girl while realizing I had wet the bed. I grabbed a half empty beer from the end table and threw it on the bed to play it off as a spilt beer.

She played it cool at the time, acting like she believed me, but as soon as we started seeing different people she said I owed her a new mattress.

My parents moved me out into the middle of nowhere at the age of 16.

There’s a large field in the middle of the woods a few miles away.

Me and my girlfriend went out there and proceeded to get busy, and a few minutes later I heard a helicopter nearby.

I didn’t think anything of it. All of a sudden there was a large spotlight on us. The National Guard uses it as a training area to practice night landings.

6. That sister has seen some things.

[We were having s^x] on a sofa bed and it folded up with us in it. We had to get her sister to come unfold it so we could get out. Got a scar on my rump where I got jabbed with a rogue spring.

5. A cringey eye-lock if there ever was.

Cops busted down the bedroom door at a party just as I was coming from a bl*wjob. She bolted and it’s just me and the cop.

He goes, ‘Jesus f*cking Christ, get the f*ck outta here.’ So I had to tuck and run.

4. He learned his lesson.

My stepfather liked to joke around and ask embarrassing questions.

He asked me and my wife how was the upside-down s^x last night. She hit me on the shoulder saying, ‘You told him.’

I said, ‘No, but you just did.’ My stepfather went beet red.

He never gets embarrassed.

He never made any s^x jokes with us after that.

3. That will ruin the moment.

Had been dating this girl for a while and she was riding me in the backseat of my car, and I really had to fart.

Tried to let it out subtly and it ended up being loud AF.

2. They got more than they bargained for.

Cops busted my ex-boyfriend and me in a parking lot.

They threw open my car doors, guns drawn and everything.

1. Huh. Never thought about that.

I’m a Type 1 diabetic and my blood sugar tanked while doing the dirty.

I went soft inside her.

She was very understanding, I ate some candy, and we were back at it five minutes later.

I am dying and I applaud these people’s abilities to soldier on.

If you’re willing to share a story like this from your own dotted past, our comments are open!