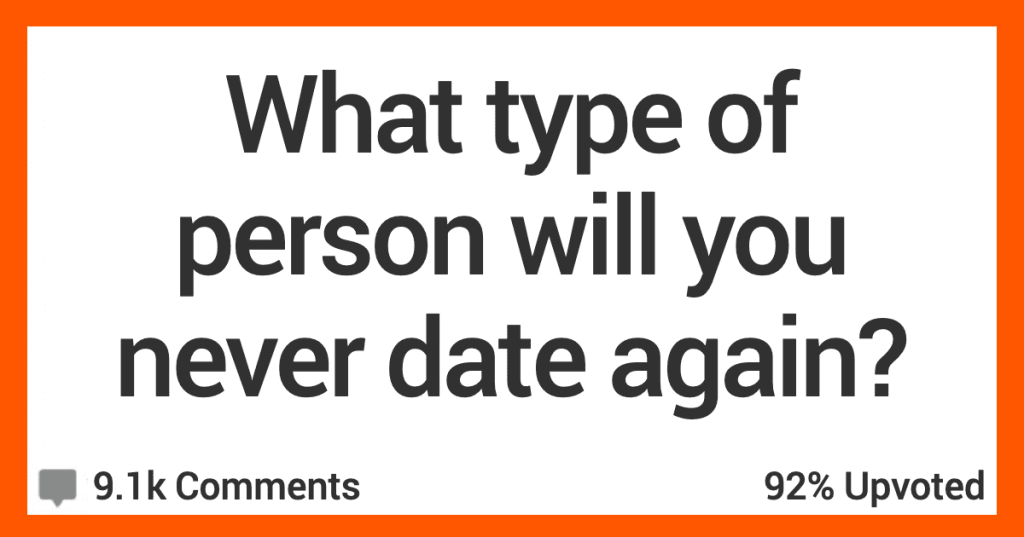 Have you ever gone out with a certain type of person…and you told yourself you’d never do it again?

I bet you have!

Here’s what folks had to say about this on AskReddit.

“It comes in different forms, but I recently learned about “stonewalling” and it was crippling.

Dismissing concerns, refusing to listen when your partner needs it, and generally getting defensive anytime a disagreement happens. Over time, it makes you feel angry, confused, and distrustful. So yeah, you definitely end up feeling like you’re a problem, get irritable, worrisome, and are eventually pushed away for being like that.

It’s sort of like gaslighting somebody, but just straight up denying their emotional need to feel heard and cared for.

I respect that it comes from a place wanting to avoid the fear and anxiety of confrontation, but how do you ever solve anything if you just shut people out and tell them they’re too much?”

“The person who is always on the phone.

I won’t even be friends with this type anymore. I had a friend who would constantly answer calls from her family when we were out. Every. Single. Time. And not a quick call no, no, no full hour long conversations.

The last straw was when she was visiting me at my house and after literal hours I realized she had headphones on and was on an active call the entire time.”

Like for real she made me sit on calls with her for 5 hours at a time and she barely said s**t.

I wasnt allowed to hang up or she’d have a f**king tantrum, and there’s some extra things I’m not going to say here.”

I wanted so badly to help my ex out. To get her out of her sh**ty living situation. Help her get her finances and medical needs in order. I really stuck my neck out. Gave it 150%. Exhausted myself regularly just so I could help her out. I just wanted to see her quality of life improve. I just wanted her to feel like life was going ok.

It was never enough… Eventually she moved in with me, and spent almost a year doing nothing but playing PS4, eating, and sleeping. Didn’t even start looking for a job. Eventually I ended it, and a few months later she moved back to her mom’s place. The day after, I woke up to literally hundreds of messages from her begging me to take her back. Saying that she’ll change. She’ll do anything. She had forgotten how much worse her life was.

I try to stay friends with her, but she’s taken to making herself the victim in our relationship since we broke up. Maybe I wasn’t perfect, I can admit that. But I willingly went to hell and back on multiple occasions just to try and make her smile. It crushes me that after everything, she trivialises everything I put into the relationship.”

I like really natural girls but the last one I dated…oof. She was fun, charismatic, lots of cool friends, good music taste, affectionate and thoughtful…when she was sober.

Once she got to drinking or worse she turned into a monster. Constant FOMO, always wanting to go out, you always need to be in the moment.

“I don’t care if you have work tomorrow, Moonsong just got some k**ler acid and we’re going over to her place to trip tonight.” “I just bought some good blow, you owe me 80 bucks.” Just not worth it at all.”

I had a lot of trauma growing up, a lot of codependency issues, which made me an easy mark for narcissists (or at least toxic, manipulative dudes).

The last one just tried to hoover me back in last month, after ghosting me months ago and right after getting married to some other poor woman. Dude’s a f**king mess. Never again.”

“Someone with no hobbies.

I’ve dated someone who ‘made’ me the person who should entertain them 24/7.

“Someone with a drug problem. Yes, maybe it’s a disease. No, it doesn’t make them a bad person. But it will ruin your life.

Not just theirs, yours too 100%, no matter how together you are in your life personally it will seep over into your world.”

“I dated a guy in college. When I met his mom, he kissed her on the lips.

He also very casually walked around the house (in front of parents) with morning wood.

I noped out of there real fast.”

The never ending posturing is unbearable.”

I don’t mind going out myself now and then, but if every single weekend involves you having to go out and get absolutely destroyed, while putting yourself in dangerous situations and with people you don’t know well, hard pass.”

Is there a certain type that you’ll never date again?