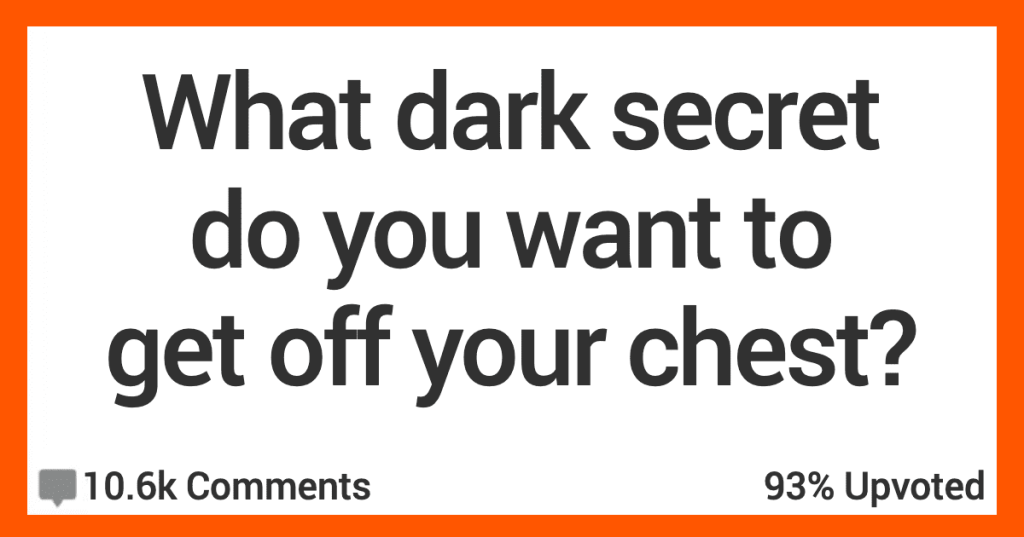 Have you ever had a secret that ate you up inside and it drove you crazy that you weren’t supposed to tell anyone?

And today we’re gonna hear from AskReddit users about the secrets that they really need to get off their chests.

“When I was seven I was home alone.

I called 911 due to a house fire that consumed half the house and they found me outside. My mother (who was at work, I was a latchkey kid) was told by the fire department that it was an electrical fire.

In truth, I had a lighter and was fascinated by fire. I was burning the little tassles at the end of the blanket on my bed, putting them out before it caught the whole blanket on fire… Until I wasn’t able to and the whole bed caught fire. An electrical outlet shorted out from the heat, which caused the firemen to think that was the cause.

I’m 40 now. My mother still doesn’t know the truth and I still remember it all vividly, complete with the heat on my face as I tried in vain to put out the bed.”

“I have terrible memory issues, and no matter what i do to keep things on track (meds, planners, reminders, alarms, etc) things still slip through the cracks.

It makes me feel terrible bc i hate the disappointed or even frustrated look I get when I ask a question and should CLEARLY know the answer. It’s especially difficult when people end up thinking i don’t care, bc “if you cared then you’d remember” I care so much.

I never want to ask what we planned for tomorrow (again) and when your birthday is (again, despite attending the party last year). it just gets really hard to juggle everything all the time.”

“My dad s**ually a**sed my stepsister who now suffers from PTSD. My mother took his side, saying she provoked it even though she was only 11 years old.

I don’t necessarily wish he was d**d, but I feel nothing will change for as long as he’s around. The thought of him gone doesn’t make me sad, but feeling this way about the man that raised me does.”

“I worked on SpongeBob SquarePants: The Yellow Avenger, and know for a fact that the game cannot be 100% completed on the DS version (99% max).

Not my fault but I hate that it shipped like that and feel sorry for anyone who’s seriously tried.”

“When I was 8 years (m) old I was at a friends sleepover. He was also the same age and there was also an older boy there.

He asked me to get naked and lay on my friend, after saying no multiple times I got persuaded to do it. He said they do it a lot as guys his age. I dont know much more of that night, I guess my brain said: Lets forget that.

I still know how the room looked, what games we played before and how the bed and the carpet looked. Im 20 now and I think because of that I had a lot of trouble accepting physical touch and intimacy. Its one of the most detailed memories of my childhood till one point…”

“I hope my step dad breaks it off with my mom.

She is physically and emotionally a**sive to him but they act like it’s a normal thing couples do.

It would be awful because I like him, but I want him to be happy.”

“I felt relieved when my dad k**led himself.

While he had a lot of mental health issues, he was also not a very nice person and put me and my family through a lot of pain for many years. I have countless stories of the f**ked up things he said and did.

I now have conflicting feelings where I am sad that someone suffered so much pain and inflicted so much pain on others but I’m also relieved that it is over and I don’t honestly miss him at all.”

“I’ve been a functioning al**holic since 2018 when I was drugged, taken to another location, & s**ually a**aulted by multiple people.

Even after I got out of the relationship, I was basically drinking myself to d**th. I would drink anywhere from 10-18 cans almost every night of the week until I could pass out in my bed until morning.

I tried cutting back a few times but would always relapse worse than before. But today I am proud to say that I’m 19 days sober, starting therapy, & am looking forward to finally getting my life back on track.”

“I reject invites to go places and see people then h**e myself for always feeling alone. I’m normally ok once I’m out and about, but the thought of going to see people or the build up to it messes with my head and I don’t know why.

It’s like I love to climb and I go to the climbing gym regularly. But every day I’m getting ready to go I get filled with this anxiety about it. And I always think to my self that I don’t really want to go, but I make my self go and after the first 10 minutes I love it and can’t wait to go back. But the next time, same thing happens.

What is wrong with my brain? Why can’t it just be normal?”

Dude was a f**king menace. Frequently had outbursts where he would destroy our apartment or threaten my siblings or my mom. His family and friends all thought he was harmless, but didn’t want to deal with him. One day he was having another meltdown, my mom and siblings were hiding in my room and I was holding the door shut while he was trying to get in so I called the police.

Dude blamed me for years after that and targeted me a lot. One day some neighbor boys tried to a**ault me and when I mentioned it he convinced himself that I must’ve lead those boys on and kept inviting them over. He was convinced that I did p**n and would obsessively search for it (I was 15, also sus as hell that he would try so hard to try to find videos of me that didnt exist).

I also had to take care of him when he shattered the bones in his arm and hand and traveling nurses refused to come to our house to flush his IV. I imagine he was terrible to them too. I have so many stories about this guy.

I was around 22 when he d**d and I was genuinely happy that he d**d. I thought I was kinda over it but once I had kids I’ve started to become angry with every adult involved. I couldn’t imagine putting my own kids in those situations.”

“During a manic episode I was filled with so much rage and sorrow that I let a homeless man take me into a ditch behind a church in hopes that he would k**l me.

He didn’t. He just snorted some m**h, showed me pictures of his girlfriends, and made pleasant conversation. I guess he was just lonely.”

“That I didn’t spend near enough time with my Nan in the months before her d**th.

For context she was 101- hilarious, kind and had all her faculties. She was the best support, and everything you would want in a Nan.

With her age, I knew time was short but didn’t prioritize her as much as I should have. I saw her the night before she d**d, and I said I’m sorry and she accepted it and forgave me but you could tell she was sad. Next time I saw her she was gone.

I regret it every day of my life.”

“I want my brother and his fiancee to lose everything they have, including custody and right to see, their kids.

I h**e them with every fiber of my being.”

“I have had the same best friend since I was 16. We met in high school.

When we turned 19 she met her husband. I quickly became closer to him than my best friend. We developed a deep brother sister type bond. My best friend has cognitive disabilities and anxiety so I would vent a lot to him because he was just easier to talk to.

This past October he d**d of AML leukemia. I stepped up and helped my best friend through the transition. I planned a memorial service, paid for the cremation (was reimbursed after life insurance processed) and was basically a rock.

But internally I am completely gutted. I do not trust easily and he was one of the very few people I felt I could tell anything to. The loss is hard for me and I have nowhere to go with the pain because the one person I would talk to about it is him and he’s d**d.

I don’t want to say these things to my best friend because it drags up so much for her. She is hurting deeply and I’m trying to be strong for her. It’s a difficult mix to deal with.”

Tell us your dark secrets in the comments.