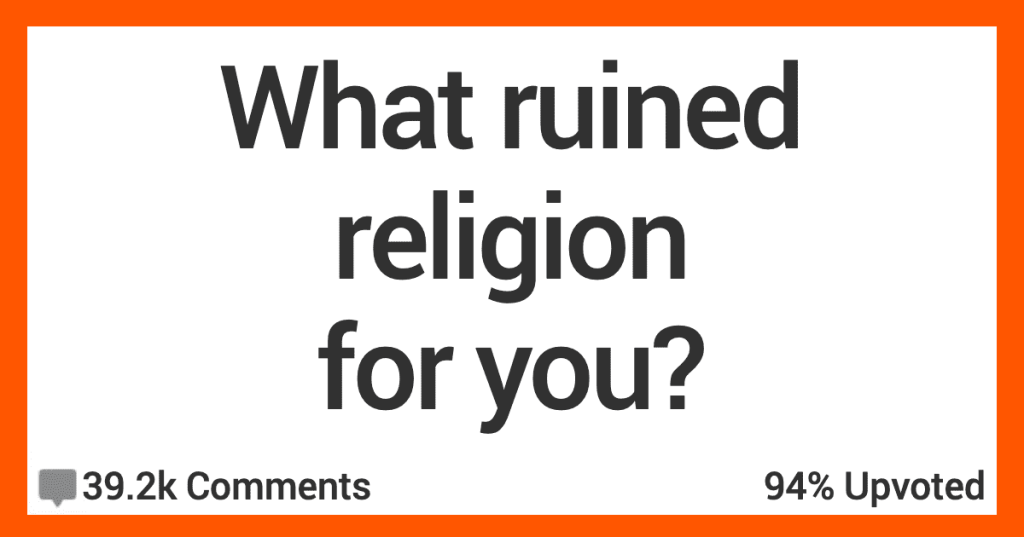 12 People Admit What Ruined Religion for Them

Religion is DEFINITELY not for everyone.

And a lot of people out there have had bad experiences with it and turned their backs on religion forever.

Let’s hear from folks on AskReddit about what ruined religion for them forever.

“Sermons alternated between asking for money, telling us LGBT people were bad, or telling us we were all worthless sinners without God.

Left church every Sunday feeling like s**t. One week, I just decided I’m not going back. I don’t miss it.”

“For me it was helplessly watching my infant child suffer in constant pain from a genetic disease called Epidermolysis Bullosa (look it up if you want to cry), and losing her after 9 months.

No amount of prayer makes any difference. No one is listening. What was ‘the plan’ for her? And why would I live for a god that chose to allow my child to suffer and d**? My faith d**d with her.”

“The idea that you’re created by an omniscient God, and they give you free will, but [will] chastise you for using that exact free will is kinda bulls**t.”

“Seeing a whole congregation of people perform an ‘exorcism’ on a 5-year-old boy. I was a teen youth leader at a southern Baptist church I had been involved with for several years.

During Sunday morning service one day, one of the deacons came from the children’s church building next door and interrupted the preacher to whisper something in his ear. They both left immediately, and when they returned, were dragging a 4- or 5-year-old boy down the aisle who was screaming like a banshee.

They ended up taking him in front of the church, holding him down, and reciting all sorts of bulls**t about demonic possession, asking the churchgoers to come up to him and help banish the demon from the child. Kinda ruined God for me.”

“As a kid, someone explaining to me that my dog that just d**d wouldn’t be in heaven. I’d never see him again.

Because dogs can’t accept Jesus Christ as their personal savior. So he was going to Hell. Pretty much done with it after that.”

“I went to a congregational church.

This meant we had a pastor, but most of the sermons were delivered by preselected members of the congregation. One guy got up to deliver his sermon, and it quickly devolved into a snobbish political rant that barely even referenced the Bible.

He was given applause and polite chuckles of agreement. This was a fairly common occurrence. I still have faith in the divine, but my faith in earthly institutions has been deeply shaken.”

“In Mormonism, there’s a ceremony called Baptisms for the D**d.

Prior to the ceremony, 14- or 15-year-old me was required to have a private, closed-door meeting with the head of my congregation (the Bishop).

In that meeting, he asked me very explicit questions about p**nography, s**, and mastur**tion. He needed to know my soul was pure.

F**king WEIRD, and creeped me out.”

“The final straw for me was my church asking a homeless man to leave and not come back.

He would sit and listen to the sermons, never bothered anyone, and always sat in the very back.

I confronted my youth group leader, and she defended the preacher.”

“I was 6 years old in a Saudi elementary school.

There was this one Christian Bosnian kid whose dad was a butcher; he was incredibly kind and often gave me delicious smoked meat sandwiches.

The thought of him going to hell as a non-Muslim was illogical, and made me question religion for the first time.”

“When I lived in Texas, I attended a Church of Christ with some very subtly progressive leadership.

They were as down-home Texan as they come, but they preached the actual message of Jesus — not that h**e-filled, fear-mongering stuff you get from most evangelical churches. When a certain president was doing a lot of h**e-motivated stuff during his presidency, the sermons reflected what was going on with precision. IRL, we were t**turing migrant children and putting them in cages…so the sermon was about kindness and Jesus’s thoughts on welcoming foreigners. IRL, a certain person was extorting another country’s leader for dirt on a political opponent…so the sermon was about doing what’s right because it’s the right thing to do, not for personal gain.

That kind of thing. It was months and months of our pastors addressing the issues as directly as they could without ‘getting political’ and p**sing off any members of the congregation…

I had always noticed the Trump bumper stickers and the ‘Jesus was a Republican’ bumper stickers in the parking lot, but one Sunday, I decided to notice who was in those cars and see if they were actually paying attention to the sermons. …

Nope, they were the ones dozing off and zoning out and looking at their f**king phones. Their pastor was tailoring the sermons to those peoples’ spiritual growth, and they weren’t even f**king listening. I couldn’t keep going there. I now do all my praying and worship the way Jesus taught us to: in private.”

Are you a religious person or has it been ruined for you?

Let us know in the comments. Thanks!