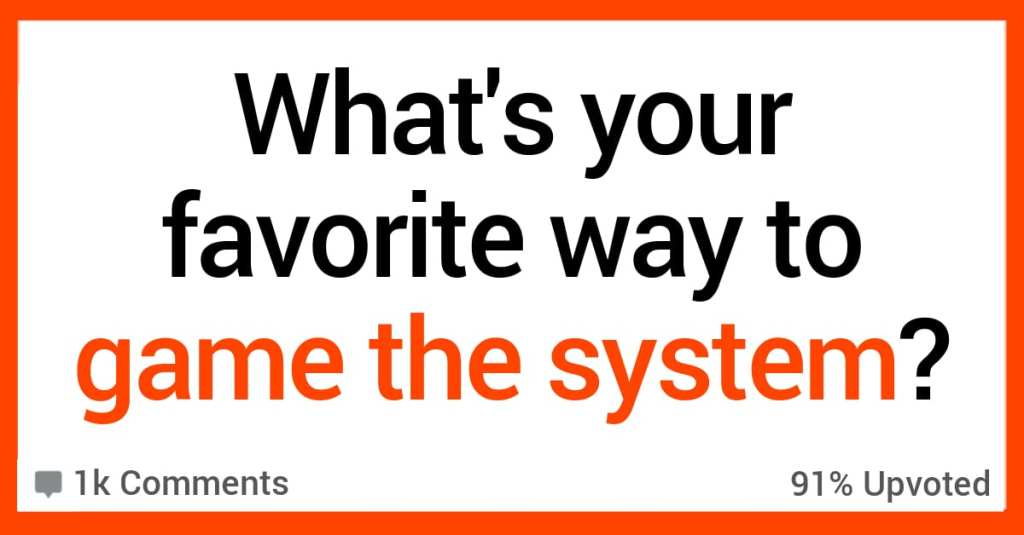 12 People Dish on Their Favorite Ways to Game the System

Everyone tries their best to be honest and trustworthy when it matters, but listen…. when you live in a capitalist society, the little man can be a bit tired of getting taken advantage of by the Man, and well …they look for ways to take a little back.

If you’re feeling all “damn the man” today, here’s how 12 people choose to game the system.

12. It’s not the worst strategy. Except you’re still playing Monopoly.

In Monopoly i always go aim for jail so i can make money without any risks.

I took a portable x-ray machine home every night, it was mandatory. So if my dog or anyone I loved had a doggie that needed a radiograph not only was it free, it was read by a radiologist.

I once got a few hundred cans of cat food that were in the 80c price range coupled with a 2$ off coupon. I got a ton of cat food free and in the range of 80 bux in groceries free since the grocery store doesn’t pay out like that with coupons.

Note, math is probably off as i don’t remember exact values. This was a few years ago.

Frequented the same convenience store every morning on my way to work. About a week before I turned 20, I started telling the employees that my 21st Birthday was at the end of the week and I would be coming the buy my first legal beer.

Did this every day for a week. So at the end of the week when I got off work I went the that store, grabbed a 12 pack and the clerk said happy birthday, this ones on us. For the next year I bought beer there every weekend and never showed anyone an ID.

I used to play Magic.

Went to a card shop in a different town while visiting my dad to pick up a couple packs. I did so, opened them, and pulled some good stuff so I decided to trade in the rates for more packs.

The employee used the store sell price to buy the cards off of me instead of their buy price.

I spent the next hour there opening packs and trading in my rates until the shift change happened and his replacement did things the right way.

I walked out with over an entire box worth minus most of the rares.

7. Sadly, most stores have a gallon limit now.

My uncle is a carpenter.

He buys gift cards to Lowe’s (home improvement store) from the grocery store, thousands of dollars’ worth at a time, and uses those to buy all his business supplies. Meanwhile the credit from buying the gift cards gets added to his grocery store loyalty card.

This is redeemable as discounted gas. Well, he also has a 500-gallon gas tank in his yard. A few times a year, he loads the back of his pickup with 50-gallon drums and uses the accumulated discount to fill them all up at a dollar-something per gallon, and then has half-price (or less) gas until the next trip in. “They set up the dominoes, I just knock ’em down,” he says.

6. That’s one way to find a bright side I guess.

I got suspended from school for a year.

The year below me had different requirements for the psychology major. Now I don’t have to take french

5. Capitalism for the win!

Back in the late 90s early 2000s we had this punk rock music store in our town. Well, record companies would send them all kinds of free sample stuff and they had a big tub at the entrance of the store where they put all the bumper stickers and album singles they got and the customers could just grab any of the stuff they want.

Well they started getting all of these N’Sync and Backstreet Boys bumper stickers and patches and posters… the store is not exactly the market for pop music.

My boyfriend and I grabbed all of the pop music stuff and sold them on eBay. Those teeny boppers wanted anything they could get their hands on. I was able to buy my first car!

4. I suppose these people talk.

Not mine but back in the early 2000s when blockbuster was trying to compete with GameStop. They were having a promo of trade in any 3 used games and get a new game for $10.

So my friend would go to GameStop and buy three madden games for dirt cheap. Less than $10 combined. He would then go to blockbuster and trade in those used games and get a new one for $10.

Eventually they caught on and he got banned from both stores.

3. Talk about winning the game.

bar down the street from me had a deal for 25oz domestic drafts for 2$. I’d order Labatt, and they would only charge me $2.

2. I never would have thought of this.

Short version is: cousin and I found keys to lockers on the bottom of the pool and returned them for five bucks a piece, used that money to then buy all day passes for three restaurants in the water park that we did all of this in.

Made out like f*cking bandits because we did this all day every day in the summer of 2009 or so.

Water park was called Aquatica, I spent my money on video games, he spent his on hair products

Game Stop has those promotions for 15-20% extra credit on trades, usually after E3. I took this opportunity to trade in a bunch of games, and spread them all out over the ones showcased in E3 to maximize my trade-ins.

After it’s all said and done and the transaction is complete, I’ll say “Okay, now I’d like to cancel all of those pre-orders”, and then put it toward something that wasn’t part of the promotion. Annoyed the store manager that was doing all of this, as it cost her 10 pre-orders. That’s how I got my 3DS XL.

I’m feeling some of these – so clever!