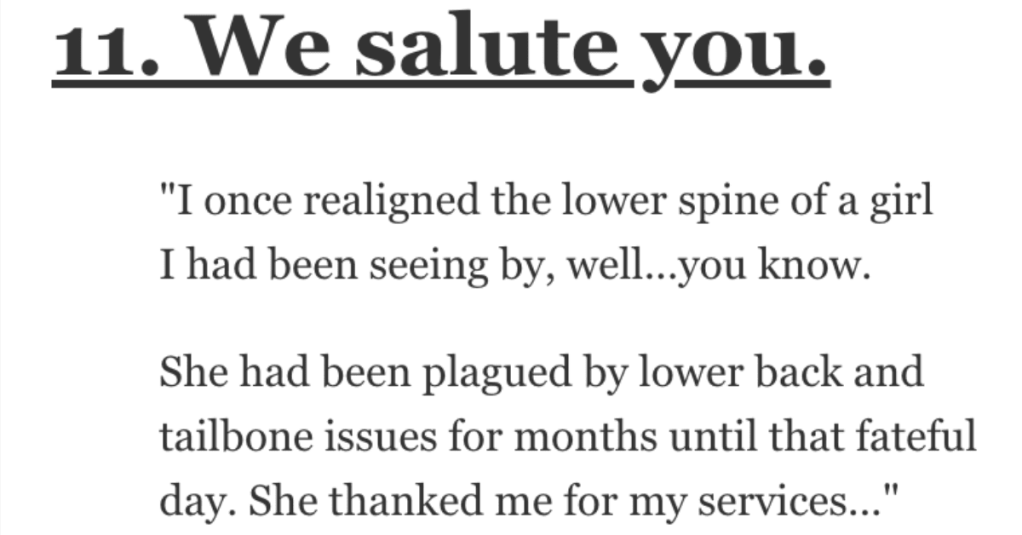 In case you didn’t know, NSFW means “not safe for work.”

Good, now that we have that cleared up, we’re about to have some fun! Some dirty fun, that is…

AskReddit users opened up and admitted some NSFW about themselves. Let’s see what they had to say.

“Girlfriend got a d*ldo with a suction cup and we were fooling around and I stuck it to my forehead.

I was a d*ldo unicorn for about 30 seconds, took it off, and the look of horror from her said it all.

I had a giant purple bruise on my forehead. Couldn’t find a good excuse so I called out of work the next day and learned how to do make up.

“My *ss is covered in small scars.

I hooked up with this girl and ended up staying over. Woke up in the middle of the night needing to pee.

I’d had a few to drink and was naked. I had to pass through her living room to get to the bathroom. As I tiptoed my way through the living room I trod on her sleeping cat.

Cat screams and scratches me, I panic and stumble *ss first through a small glass table. I had about 20 cuts in my *ss, blood everywhere and of course just to round things off I p*ssed right then and there.

Needless to say the girl woke up to a traumatized cat, a destroyed coffee table and a living room covered in p*ss and blood.

I left very shortly afterwards and was not surprised to find myself blocked instantly. But I still carry the scars to this day.”

The news of my grandmothers death was not an exception.”

“I went through a phase where I was having a lot of semi-casual s*x with the same 3-4 guys for like, a year. I didn’t want to date any of them and none of them wanted to date me and they all knew I was sleeping with other dudes— some of them even thought that was hot.

Anyway, I started thinking I might be emotionally ready for a relationship again and I wanted to make sure that when I did meet someone I loved, I was the best lover I could be.

So I polled all the dudes I was sleeping with for critical assessments of what I did well and what I could improve upon (scores out of 5 and explanations basically).

By all accounts, I’m really good in bed now (my last boyfriend said that he had no idea s*x could feel that good and he was eight years older than me) and I owe a lot of that to my 2014 focus group.”

“I had s*x in a very expensive stolen car.

I didn’t know it was stolen at the time. My f*ck buddy worked at a car dealer and said they were allowed to borrow the cars after hours but, when we saw a cop afterwards, screamed “get out get out” and we left and ran down the Embarcadero.

For about a month, I worried that the cops would find me due to my fingerprints being all over the place but that was when I was young and thought cops actually cared about that kind of stuff.”

6. Never heard of that one.

“I once had to go to the hospital for what was diagnosed as a “post-orgasmic migraine.””

It was the freakiest thing when it started happening and my doctor couldn’t figure out what was happening. I would use a toilet and then a few hours later brownish spots would appear and those spots would eventually turn a purple-ish color.

My wife and I figured it had to be something to do with my medication because it only started happening when I switched to new meds. Eventually, after a lot of research, we found a paper in a medical journal that mentioned that in very rare cases the urine of patients who took my medication would have have interactions with various household cleaners.

That interaction can happen on the film of cleaning solution residue on toilets and turn brown, red or even purple.”

“My testicles are drastically different sizes.

“When I was born my p*nis was so crooked they had to completely rearrange it in surgery.

They said that if it was left as it was my d*ck would point at a 60 or so degree angle to the left and that urinating would have been quite the task.”

“My record for having s*x in one day was 7 times in a row.

After that I c*mming dust for the next two days.”

“I once realigned the lower spine of a girl I had been seeing by, well…you know.

She had been plagued by lower back and tailbone issues for months until that fateful day.

She thanked me for my services…”

“I was a very goth teen and I lost my virginity in a graveyard.

The guy is now deceased and buried in THE SAME GRAVEYARD.”

Are there some NSFW facts about yourself that you’d like to confess?

Well, go ahead and get ‘er done in the comments.