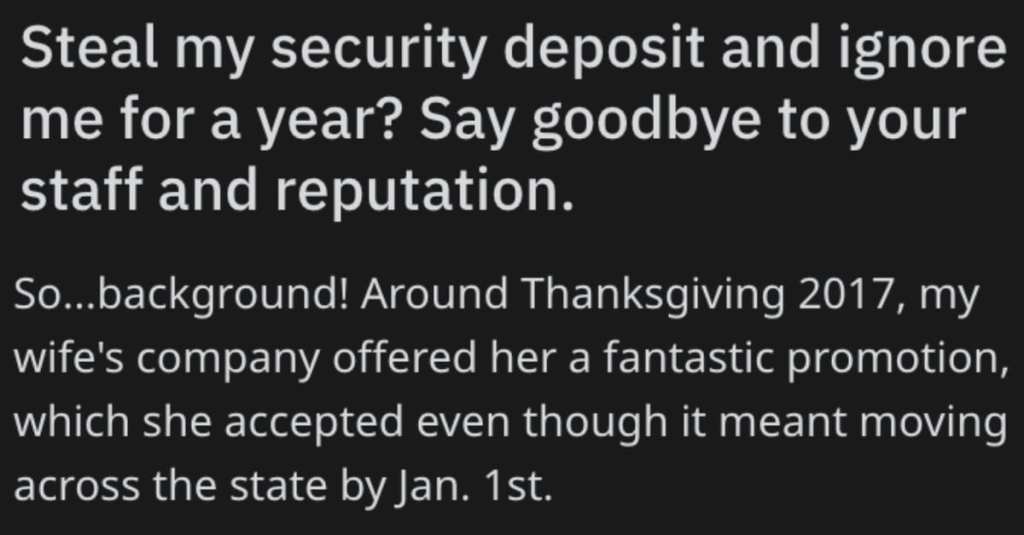 Doesn’t it drive you nuts when companies mess around with your security deposit?

If you’ve kept a house, apartment, or an office clean and took care of the place, these businesses just need to give that back ASAP, right?

Well, this guy had a run-in with a company about his deposit that was stolen from him and he shared his story on Reddit for all to see…let’s take a look.

Steal my security deposit and ignore me for a year? Say goodbye to your staff and reputation.

Around Thanksgiving 2017, my wife’s company offered her a fantastic promotion, which she accepted even though it meant moving across the state by Jan. 1st.

The month of December was insanity – list and sell the house, find a short-term rental which would accept 4 pets, pack, move, etc. A lot of whiskey magically disappeared but I got it all done and we moved into our rental house and all was well!

We bought our new home and moved and the rental lease officially ended on April 1. The Property Manager followed the state laws correctly so far and we were told we’d get the $1,800 owed for our security deposit back by May.

Spoiler alert: it never came. I spent the next four months going back and forth with the Property Manager and hearing “It’s coming”, “We never got your paperwork”, blah blah. I got sick of this and got two different lawyers involved and sent them official Demand Letters. I also filed a formal complaint with the state Division of Real Estate against their license.

The P.M. kept telling the state investigators that they would pay us back but nothing ever happened. I didn’t want to formally sue via our lawyer because he charges $300/hour and it’s all up-front.

I was hesitant to go to small claims court because it’s a $5,000 max in our state and the damages we’re legally owed are 3x the $1,800 deposit, which puts us over that cap – so I’d have to give up on some of the damages we’re legally entitled to seek, eat roughly $500 total in fees, and then go through that whole process for the next year, and assuming we won the judgement, then go through the collection process for another year or two. An option, one we’d win, but a big pain in my *ss.

So this is where the pro revenge comes in. It was initially petty…say their website is “sh*ttypropertymanager.com”. I bought “sh*ttypropertymanager.co” for $12 and posted all of my screenshots and info about their theft and bullsh*t for the world to see, and then I bombed it all over their business Facebook pages as well as the personal pages for the main partners and their Yelp page.

I got a kick out of it, they took their pages down, petty revenge wins, right?

My little website caused a bigger boom than I anticipated. Basically, this P.M. has two principle agents in charge and a broker. One of the agents is married to the broker. Beneath them, they have (HAD…heh) 5 realtors. I sent my new website to them all, everywhere I could.

Turns out the partner who isn’t married to the broker had NO idea that the broker and his wife were stealing money from the P.M. company. Their realtors had no idea, either – two of them quit immediately, and one reached out to me to let me know why she quit and that she was going to a new broker.

But the other principle of the company was mortified. She asked me to leave her name out of it, take the stuff down, etc. and I just politely but coldly replied that hey, your business partners / broker stole my money and I can back everything I’m saying with documents, not my problem. She promised she’d get things resolved and for the first time in 10 months, the broker started answering my e-mails.

We worked out a deal and they’re now paying us $200/month until December, which will cover the amount owed plus the extra for our legal fees. The first check came last week (it actually BOUNCED but I made them send me a cashier’s check and they have to send cashier’s checks going forward, so we did get our first installment.)

I’ve also learned that the state investigation has been turned over to the state’s legal department and the broker and his wife will likely lose their license – the state investigator said they had multiple complaints against them but I was the most thorough and had the most documentation against them, so our complaint was a big reason they had the ammo to push it to the legal team.

So all told, my sh*tty little website ended up costing them 40% of their real estate team, resulted in them removing their business FB listings, pushed the investigation into their license over to a state legal team (still ongoing), and resulted in them having to FINALLY start paying us not only the $1,800 we’re owed but the legal fees I spent on top of it.

Oh, and that bounced check? I made them send me a certified check for $12 to cover the bank fee for that, too.”

This person said that this must be a pretty shady company if they can’t cough up the cash…and their check bounces.

Sounds fishy to me… 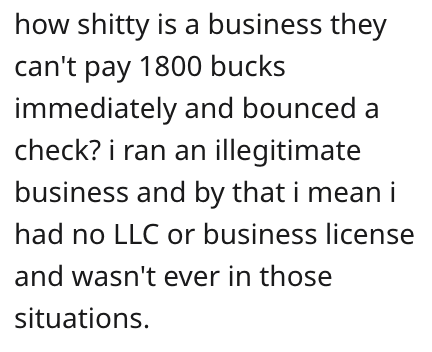 Another person said that $1,800 really isn’t a whole lot of money, or at least shouldn’t be, to big companies. And this publicity definitely won’t be good for them. 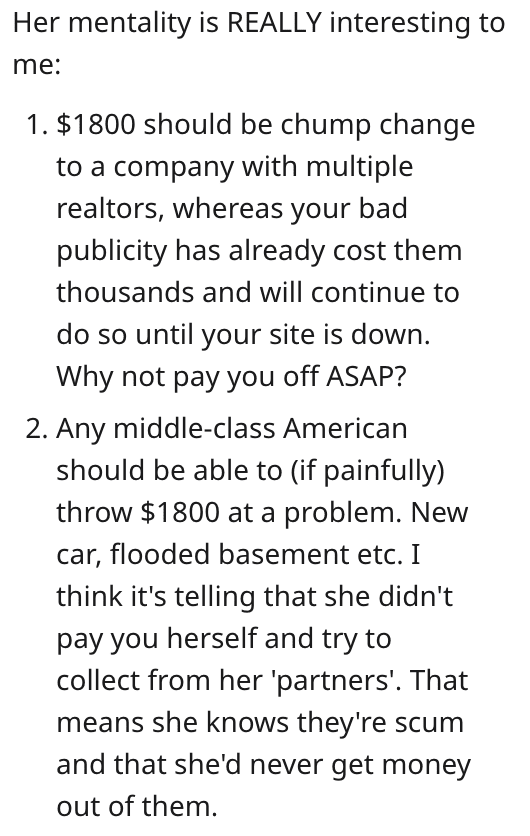 This individual said that putting up the website shaming the company was the right thing to do and that he should leave it up until he gets all his money back. 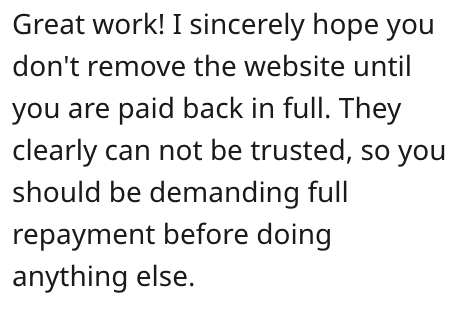 Finally, this person can relate to not getting a deposit back in a timely fashion…which I thin a lot of us can, as well. 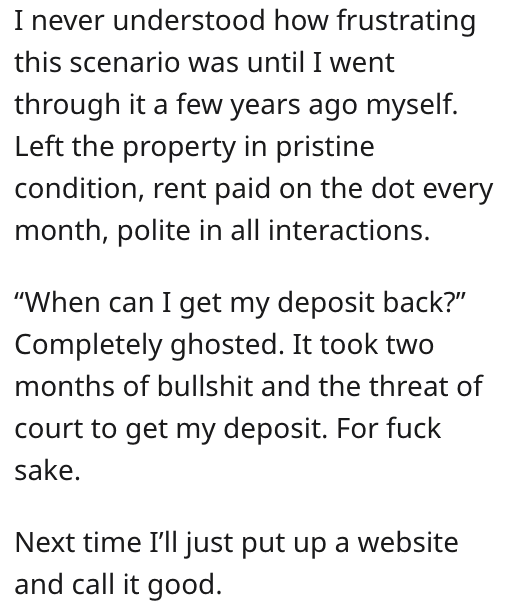 Talk to us in the comments and let us know. Thanks!