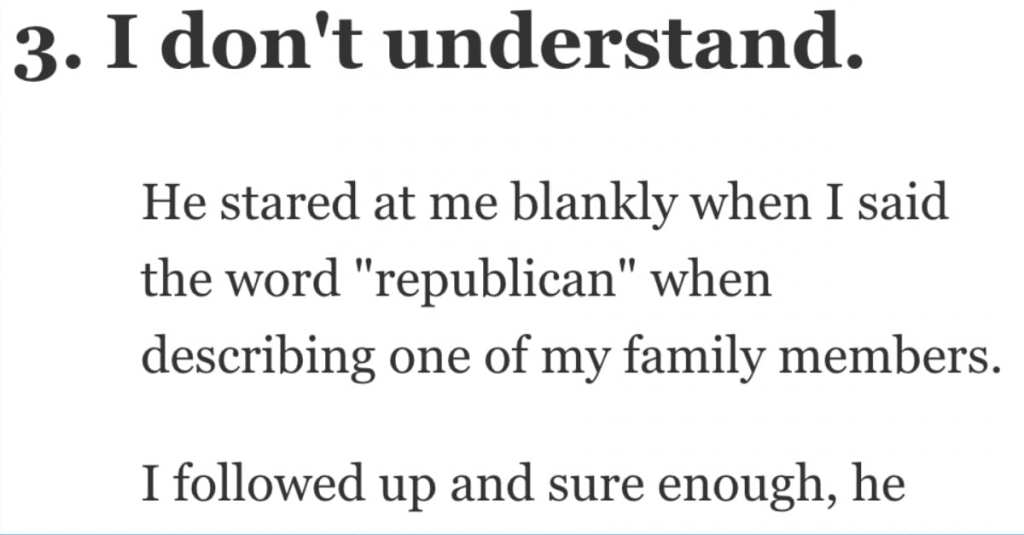 Dating is a minefield that requires a bunch of snap decisions to navigate with any satisfaction. We have to say yes or no to people and dates without having a ton of information, many times just based on a gut feeling.

Maybe some of the reasons we use to blow people off seem surface level, but I used to automatically decline anyone who didn’t list a last book they read – who has the time.

These 12 people also had petty reasons for not going on date #2, and they’re going to make me laugh.

She was super hot, but she smelled. I dunno if she didn’t shower or use deodorant, but she just smelled funky. I couldn’t do it. My best girl friend at the time was like, “just tell her”.

How do you tell a girl you’ve known for a few weeks that she smells bad?!?! So I just stopped talking to her. Brilliant.

She was a volunteer at the Zoo and when kids asked her questions she didn’t know the answer to, she would make something up and lie.

Growing up on zoobooks and Steve Irwin, I take animal facts very seriously.

I went out on a few dates with a guy that I had been really into for months.

I was starting to realize he wasn’t the brightest bulb in the room.

Then one day he said he liked watching commercials on TV and that was that.

9. It seems like a small thing but it’s really not.

He didn’t re-rack his weights. I will never, for the life of me, understand why people don’t return/re-rack their weights.

She didn’t know that foxes were real animals.

She thought they were mythical and just in movies.

7. OK this is petty af though.

My new car kept scraping on the bottom while pulling out of their steep driveway to the main road.

After the fourth time of trying to be careful and it still scraped……..

I went out with someone who has the same name as my cat.

I brought him back to my house and the second I got home I greeted my cat and the guy looked at me and I knew right then and there that I couldn’t do this.

5. I pictured this in my mind and laughed out loud.

Went on a first date to the movies.

This f**king guy…instead of picking up his drink and lifting the straw to his mouth, he would put his hands on his knees, keeping his eyes on the screen, and lean over to the drink and ‘hunt’ for the straw with his face and his mouth contorted sideways trying to land on the straw.

4. This happened on Seinfeld.

Her complete inability to follow the plot of a movie.

He stared at me blankly when I said the word “republican” when describing one of my family members.

I followed up and sure enough, he literally had no idea what the word republican meant and didn’t know about our largely two-party system. He was in his late 20’s.

A guy on a dating app said he wouldn’t date me because I didn’t like oysters.

1. That’s why you pick a fun name for your kid.

A very attractive, fun, smart woman asked me if I wanted to go get ice cream with her.

I turned her down but I guess in a way that she felt was flirty, so she kept asking.

And finally I had to tell her I was turning her down because she had both my mother’s first and last name.

She laughed a lot and agreed we couldn’t date.

I mean, I feel like some of these are fair.

What’s the pettiest reason you’ve ever broken something off? Confessions in the comments!