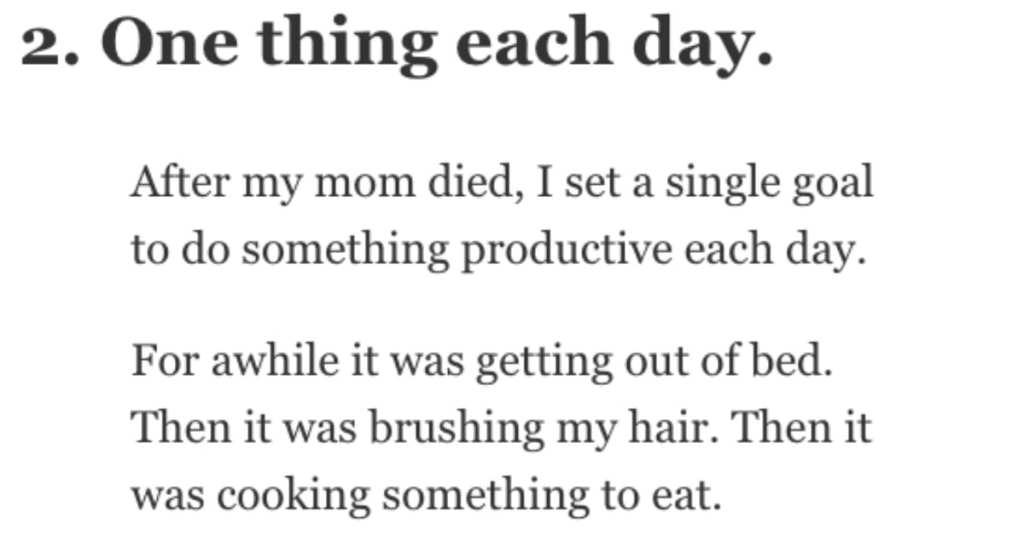 Martin Luther King, Jr. once said, “If you can’t fly then run, if you can’t run then walk, if you can’t walk then crawl, but whatever you do you have to keep moving forward.” To me, this means that no matter what life throws at you, you have to remember that the future is where you’re headed, so there’s nothing to do but shake loose of the past and head forward as best as you can.

This can be tough to do, and while I do believe everyone should have their fair chance to wallow, once that’s done it’s time to put on your big boy pants or swipe on some lipstick (or both) and put one foot (or knee or elbow or hand) in front of the other until you can run again.

If you’d like some advice on how to get that done from some folks who have been through the wringer, these 12 unique perspectives just might serve as inspiration.

This is a real tactic and works well. I always tell myself I have to do 2 things everyday.

Depending on the day, it could be just getting out of bed and feeding myself.

On better days, it’s getting some work done and doing dishes.

Just committing to 2 things sounds simple, so it helps keep me to it.

My career. I feel like I’m flying now but holy smokes did I start off as a slow crawl though…

10. It really happens faster than you think.

A couple months ago I was crawling, now I’m walking.

Doubt I’ll ever be flying, but at least I’m stronger than I was.

This is extremely minor, but I completed a 5k. I’m not a runner. In fact I hate running. I have short legs and small feet. I’m slow and overweight. I did train, albeit not much.

I started the race by running until I was out of breath (1/2 mile in). Then it was intermittent walking and running until the end. I was the second to last person to finish, but I didn’t care. It was one of the best highs I’ve ever had. It felt good to accomplish something I always told myself I would do someday, but never worked up the courage to try. I was proud of myself.

This is going to sound stupid to most who haven’t been through it but my (ex) husband of 17 years cheated on me with my best friend. It’s all so cliche. We had two preteen boys that he didn’t want anything to do with.

Somehow I kicked him out of the house. Didn’t accept his fake apologies. And then watched my run turn into a walk, then a crawl. I dragged us through every day. It happened the last two weeks of school and I still went to their end of the year award programs and smiled even though neighbors were whispering and I hosted birthday parties minus a parent and I taught one to drive.

I am not completely sure how I was strong enough but I brought us all forward in those dark days. I wasn’t going to let this affect them. And now, even with their dad living three miles away with his new family and acting like they don’t exist, I crawl, with them on my back.

7. Terrible to have to do it alone.

When I was 22 I lost my leg due to a suicide attempt and becoming an amputee as a result of my own stupid actions was extremely difficult but I decided I was going to keep living and really see what I could do with the time and resources I have.

I always thought I was too stupid and ugly to do anything with my life but once there wasn’t much left to lose I got my shit together stopped being a victim and now I’m 25 going to school, clean and sober, no friends or girlfriend or family really but I’m content being alone with my thoughts and I think my prosthetic looks pretty badass.

6. How can one person go through all of this?

My wife died June 2015, I lost my job the same moment she passed because I was her in home caretaker for 3 years because she was in a persistent vegetative state, I got addicted to methamphetamines again after 22 years of sobriety, my service dog of 10 years died, I survived an attempted murder from two people with rebar and wound up with brain damage and a broken neck.

I got evicted because I couldn’t afford any more to live in our town home, I walked away from 30 years of memories because I had no where to store anything, I spent two and a half years homeless living on the streets and in shelters, and the majority of everything that happens to me happened in six months.

I finally got on social security for schizoaffective disorder that I got from using drugs after my wife died, and I finally got a home again back in September. The point is I got through it all because I kept moving forward.

I rode my bike across the US. Most of it solo.

In the middle of Missouri, I just … had enough. I stopped on some guys lawn and just cried. He came out and asked me what was up and I explained how far I’d come (started in San Fransisco) and that I was just done.

He told me to ride into town (I think Springfield?) which was only 10 miles away and take a few days off and rest. Which is what I did, because hey, one more day wouldn’t matter, and the worst that would happen is that I’d pack it in and go home.

Well, a day of rest seemed to be exactly what I needed. I spent a whole day (or most of it, anyway) in blessed air conditioning, ate all the food, drank all the water, and was more or less ready to go again.

I took a few more one-day breaks between Missouri and Williamsburg, VA which really helped me out.

So yeah, one step back, two steps forward.

Graduated high school in ’01, tried the 4yr university thing. Was really depressed and didn’t go to class much because of it. After the first semester dropped out and enlisted. 3 years later I’m medically discharged.

Worked multiple shit jobs wile attending CC, find a somewhat decent job while nearing the completion of my associates, then the recession happens. Finish my associates while spending a year on unemployment. Unemployment runs out and I decide to hold off on trying to transfer to finish my 4yr degree.

Get a job at gas station, month later promoted to assistant manager, 8mo later, I’m store manager. Year later leave for a contractor position at a bank doing ATM support. About a year later im hired on as an employee. 5.5 years later im in a new salaried role doing data analysis and finishing my degree.

3. May he find someone to lean on one day.

My parents never believed (and still don’t) that depression is a real thing, so they never got me help when I was younger.

After my mom died, I set a single goal to do something productive each day.

As each little thing graduated from my “thing” for the day to just habit, I would add a new thing. It took awhile to be functional again.

It really did feel like I was crawling when everyone else was running.

A while back I was trying to make an app, learning from scratch it was hard to find time around work, friends, girlfriend etc but I had the mantra of if I’ve only got 10 minutes then do 10 minutes.

The actual 10 minutes didn’t achieve much but it kept it in my mind and when I had a spare couple of hours, I was in the mindset to do that couple of hours and over the months my project gradually grew and grew

Eventually I got out of the habit and the app got less and less attention so it never got finished. I’m furloughed right now, maybe its a good time to get crawling again.

People are really so strong when they need to be, don’t you think?

What’s your own personal example of a moment like this? Share the story with us down in the comments.