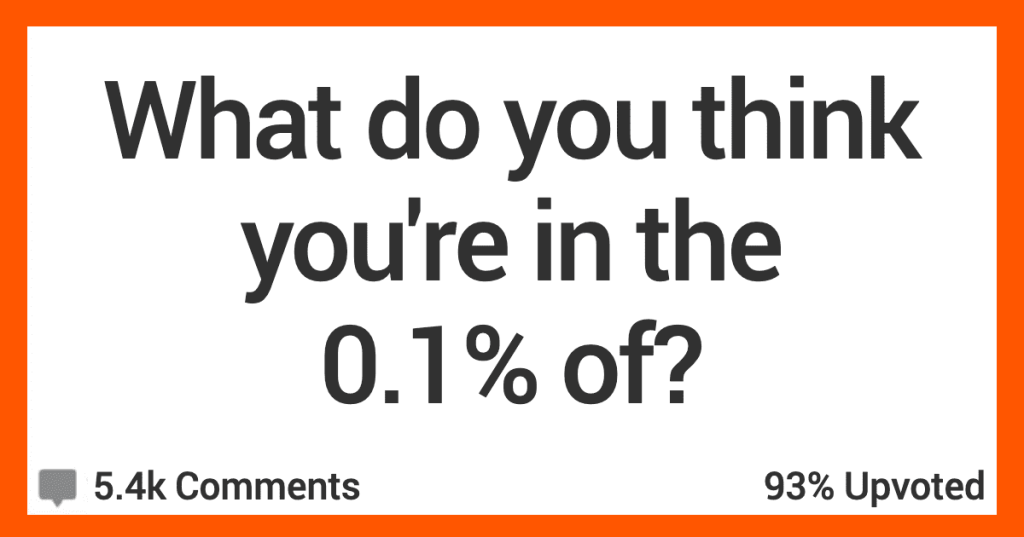 In other words, what’s so unique about you that barely anyone else on the planet can claim the same thing?

While you think about that, check out what AskReddit users had to say about this.

“I’ve got solar urticaria which is essentially a sun allergy. If I’m out in the sun for too long/ the sun is too strong then I start developing an itchy rash on the skin exposed to the sun.”

Super Mario Kart on the SNES

“I have a birthmark next to my left eye that changes shades based off how tired I am.

I’ve had many failed all nighter attempts due to this because the morning after my parents could always tell that I hadn’t slept, and would promptly get mad.”

I grew to become rather passionate about strengthening my back due to being born with severe scoliosis. I can do a 5×5 with my body weight, 170-180 lbs, added in weight.

I do these heavier pull-ups neutral grip, however. I think it’s better for my joints and better for overall training.”

“I can lick my elbow!

I have yet to find someone else that can do it!”

“Aphantasia! I literally don’t have imagination, my brain is not able to form images in my head.

If you were to ask me to imagine something, ill describe the object, explain the concept, and rattle off facts I know about it. But im not able to experience any sort of mental image.”

“I can solve a Rubiks Cube in 15 seconds.

I’m only 16 too lol and 3 neurologists have given up so far.

I have a chronic condition that has been written about multiple times. Whenever I moved, and my dad was an Army officer so I moved a lot, I ended up getting new doctors and there were new papers written. As an adult I have moved a couple times.

When I get new doctors they always tell me they have found several cases like mine…I then list off the papers that were written about me. They find me. I do warn the doctors before I visit about this.”

I was exposed to a prescription medication for too long and it kinda nuked that part of my brain.

I can still be surprised and excited. But not afraid of pretty much anything.”

“I was born with an extra digit on my hand

It was surgically removed when I was 7 months old but no one remembers why.”

“I have narcolepsy, which is one percent of population.

So I think I’m in the 10 percent of narcoleptics (so 0.1 percent) that have a mild type-which is very rare, I’ve been reading patient stories for years and very few are mild, pretty much ten percent. My sleep doctor only has a few patients like me. On meds I feel like a normal person, wake right up with energy and don’t usually think about taking naps.

Without my meds (or caffeine) but rested I will fall asleep mid afternoon if I’m in a quiet place where I know I can nap, but if not I can stay awake. I’m not happy about it and sometimes feel almost a bit dazed but I can function, drive, most people wouldn’t notice. However if I don’t take meds and I’m not fully rested or had a bad few nights/days, I am disposed to falling asleep driving, especially in the afternoons. And people will comment I look tired.

And if it’s a day I’m not working I will have to take naps and I will have the “irresistible urge to sleep” which is almost like passing out. And it’s funny having a 1% disease that won’t kill you and is kind of exotic, because you are almost a medical celebrity. I’ve had surgery quite a few times, and EVERY TIME the anesthesiologist’s eyes light up when I tell them, and they get animated when explaining the risks of anesthesia.

One Dr. even said,”Oooo a narcoleptic! You’re my first!” and asked me the whole backstory and he peppered me with questions for a good fifteen minutes.”