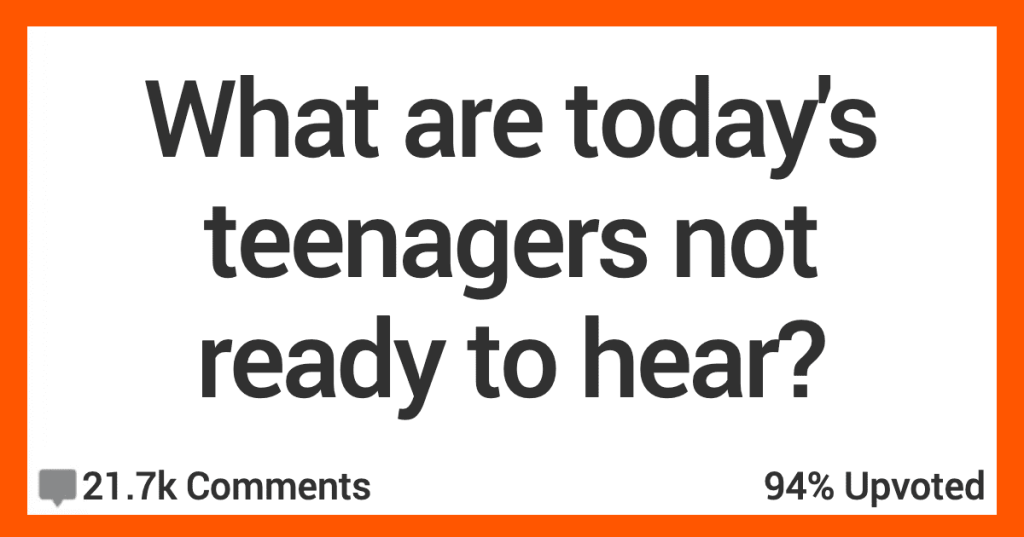 Do you spend a lot of time around today’s teenagers?

Whatever the case, there are things that every generation of teens isn’t ready to hear.

2. You better believe it!

“Your parents were hip and cool before they had to pay your bills and feed you and buy you the cool clothes so you can impress the friends you’ll forget about in 10 years.”

“You won’t ‘feel’ different when you’re older, or have kids.

“They’re saving your nudes, even if you sent them on Snapchat and think they can’t screenshot without your knowledge.

They can. Take it from a zillennial who knows from experience…”

Most of the time they really want to help you.”

“To the ones who ride the public bus in my city, specifically: nobody else wants to hear whatever TikTok you’re watching.

“School has a system in place to keep you from falling behind, life doesn’t.

Life will run you over if you f**k around.

And even if you have your s**t together, you could be one financial crisis away from losing it all.”

“Drugs are not a game.

I work with teens and none of them take me seriously when I tell them to never, ever mess with pills.

Even when I list all the people I knew at their age who are now d**d from opiate abuse and ODs.”

9. Be patient and work hard.

“Getting good at stuff will take time. Sometimes lots of time.

Don’t be mad that someone possesses skills you don’t, and don’t be a jerk for possessing skills that many other people don’t.”

“Not everybody can be an Internet sensation.

Somebody has to drive the dump truck…”

“One day you too will be old and uncool.

And it’ll happen faster than you think.”

“An ounce of prevention is worth a pound of cure.

Cut back on the sugary s**t now. Take care of your teeth now. Start working out now. You don’t have to be a bodybuilder and look like Arnold Schwarzenegger, just be active.

Now is the time to get out and do a bunch of crazy s**t but at the same time remember that whatever you do now you pay for 20 years later somehow someway. And this can be taken in a good way or a bad way. Don’t want to take care of your teeth now? Have fun dropping $30,000 on your teeth like I had to.

Not exercising or eating right? Have fun with that quadruple bypass that my father just had. My girlfriend’s parents are older than my parents but because they do those things they haven’t had nearly as much hospital visits as my parents have.

By comparison my parents are falling apart and they’re only in the 50s. My girlfriend’s parents are in their 70s and objectively are healthier. The big difference? Early in the morning, every morning those two are downstairs working out hitting the weights and machines for a solid hour or two.

Do you want to speed and act a d**n fool on the road? Have fun when you have to pay for your own insurance and nobody wants to ensure you to drive a f**king Honda Civic for no less than $350, like me.”