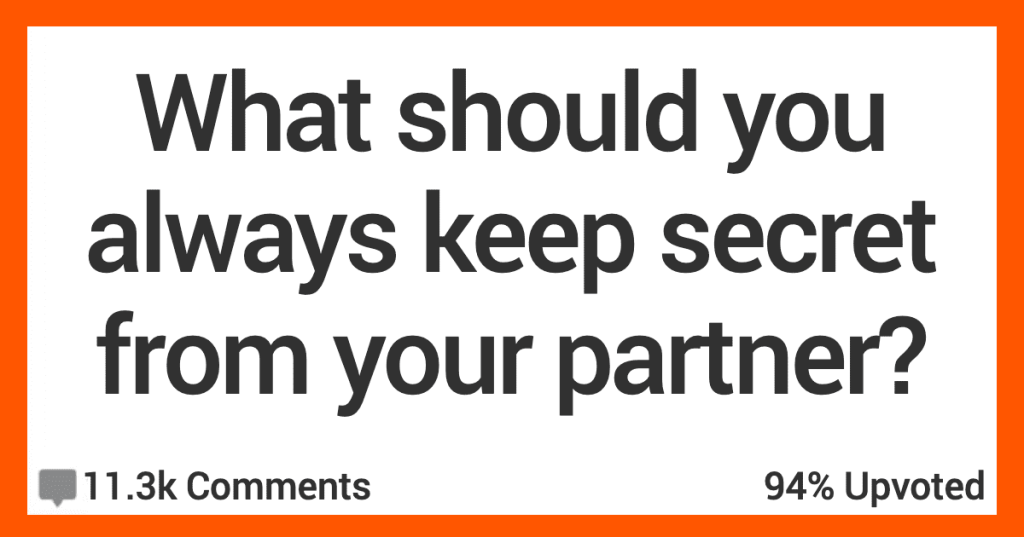 Do you think it’s okay to keep a secret from your partner?

If it’s something deep, dark, and you know that it will hurt the other person?

I guess it depends on the relationship you’re in…

Let’s hear from AskReddit users about what they think you should always keep from your partner, no matter what.

“My wife and I have been married for 40 years, and over time, you just naturally learn what topics to avoid and what issues you will just have to agree to disagree on.

My wife and I are of different religions: I’m basically agnostic, and she is fairly religious. I have just learned over time that she is not going to change her feelings about her religion to suit me, so I have no other choice but to just accept it.

Basically, we rarely discuss religion because there is usually no need to.”

“My then-boyfriend and I went to the jewelry store to look at rings, and I picked out one I loved. Several months later, he proposed to me with a ring from that store, and it was the wrong one.

I still liked it, but it wasn’t the one I really wanted. I couldn’t bear to tell him. We’ve been married 15 years, and he still doesn’t know and never will.”

“I’ve broken up with partners who insist on going through my phone and private accounts such as email and social media.

I used to date someone who was very controlling when I was young, and it was awful. I will never tolerate that again.”

“In my case, how many women have hit on me at my job, try to flirt, and offered to have some form of s**ual activity with me.

I work at college apartments, and at every turn, there are new women, and because I’m friendly (with everyone), they sometimes shoot their shots.

I have the need to let her know; I feel guilty not being 100% honest with her, but she would flip her shit knowing it, and this job pays insanely well.”

“I recently came to believe that perfect, complete, total intimacy is not that great for relationships.

Esther Perel wrote that ‘eroticism requires separateness,’ and if you don’t have something that is just yours, you lose that. And you are probably kidding yourself about the totality of intimacy anyway. Share what you feel like sharing. Accept what your partner feels like sharing

. You are entitled to your partner’s respect and affection (if you hold up your end), but you are not entitled to their every thought. You are two separate people building something together. But you are still separate.”

“It’s probably best not to mention how their family annoys you, unless it is a really harmful thing.”

“I had an ex read my journals about private things.

Then, he stole one from me and black-mailed me into doing what he said to do or he would expose my secrets and things I wrote privately.

I don’t keep journals anymore after that.”

“An old friend of mine’s girlfriend told him he had started as her rebound. I was there when it happened, and I swear to God I saw his heartbreak.

They were really good together and really liked each other, so he tried to keep going, but I watched it eat him from the inside out until he just couldn’t take it anymore and broke up with her. There really are some things you just can’t take back.”

“My girlfriend told me how much bigger her ex is compared to me.

Ladies, for the love of God, don’t do that.”

“My dad has mentioned a few times that in their 40+ years of marriage, he’s never gone in her top dresser drawer or purse.”

“My wife is sensitive about animals, so any time I see/read some sort of tragedy related to an animal, I hide it from her.”

“Criticism of any kind just be careful with. I have a family member who tends to be very critical of his wife, and I can just see how it erodes her confidence and their bond.

In front of people is even worse, but even in private, telling your partner there is something wrong with them should be rare and only when it’s actually important.”