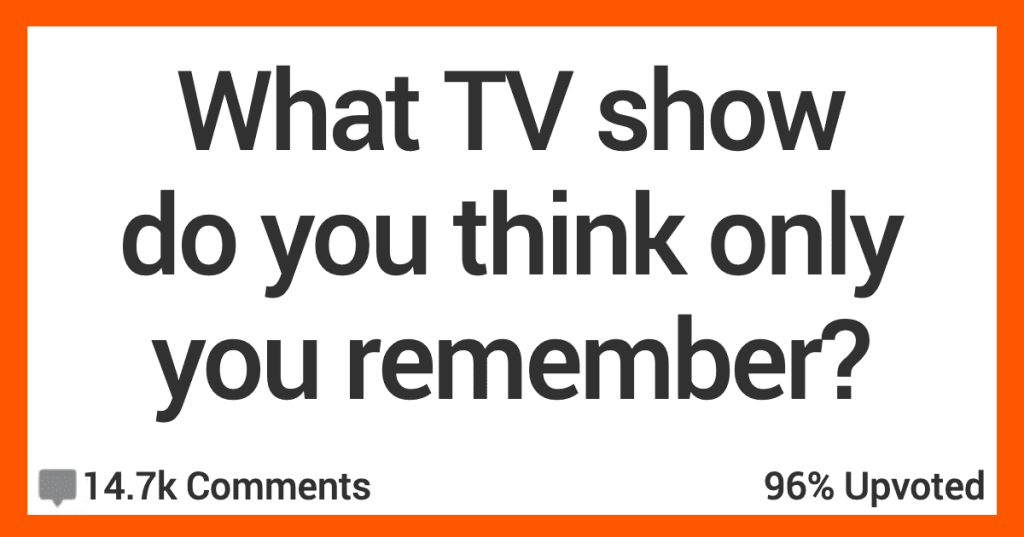 12 People Share What TV Shows They Think Only They Remember

Let me ask you a question: have you ever asked other people about a particular TV show from your childhood or from way back in the day and they tell you’re crazy and that it never existed?

It happens all the time, folks!

Let’s see what they had to say…

1. Do you remember this one?

With that girl from Firefly in it with rainbow hair that I totally coveted as a kid.”

A TV show where these store mannequins came to life overnight when the store was closed.”

“American Gothic with Gary Cole as the menacing sheriff who may have been the devil.”

It was about a family with a girl robot that nobody was supposed to know was a robot.

They had a nosey neighbor named Harriet.

NOBODY remembers this but me.”

I had to watch it in secret because my mom was fundamentalist and thought it glorified the demonic/supernatural.”

“You Can’t Do That On Television.

The origin of Nickelodeon’s green slime.

Strange that it has been forgotten.”

It was strange but I liked it.

I think it kind of self destructed.”

“Every time this question comes up I always answer the same thing: The Great Space Coaster.

There was a clown like alien and an orange guy with hairy ears, a scary monkey, an elephant that controlled its own trunk with a handle and Gary Gnew, a gnu who was a News Anchor who was against news, his motto was something similar to: “No News is Good G’News” and a regular human boy and girl.

Saw it once in Orlando and later in a Spanish version.”

“Head of the Class.

Guy from WKRP is a high school teacher of a class of misfits. One of the students was a nerdy girl who was younger than everyone else.

The actress was Tannis Vallely and at the time I could have been her twin.”

“When I was a kiddo in the 70’s, there was a show called ‘Zoom’ on the Boston PBS station we got in Montreal.

It was like an older kids’ Sesame Street or Electric Company. No one I now know has ever heard of it.”

The Disney Channel used to show it in the states and it was a favorite of mine.

Tell us about some shows that you think only you remember.