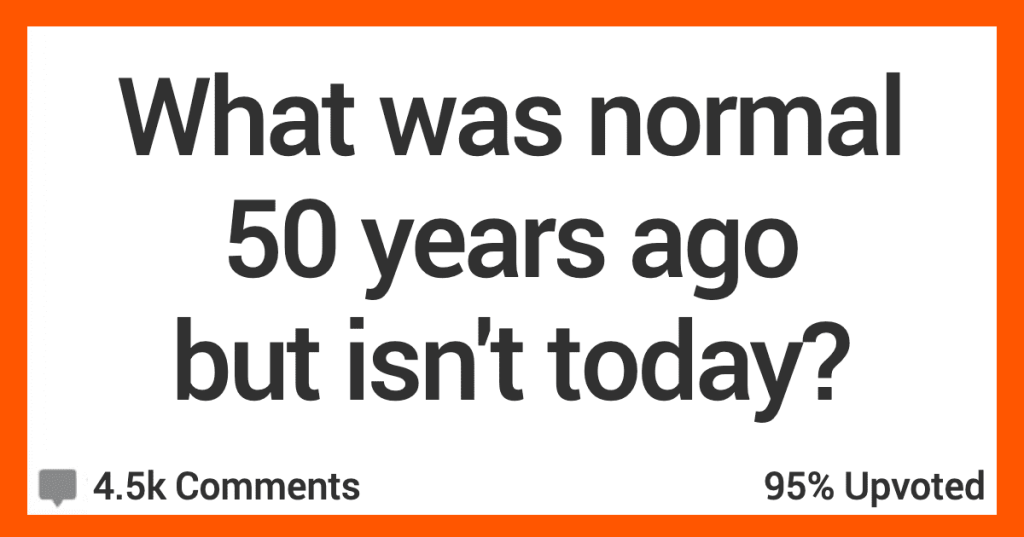 Times sure have changed, huh?

What was normal 50 years ago but isn’t today?

AskReddit users shared their opinions about this.

“I was s**king in Drivers Education classes @15yrs old (you could take it up to a year before going to get your driver’s license in Massachusetts back in the early 1990’s and get the cost of of drivers Ed taken off your car insurance for the year Plus earn safe driver points for the next few years, lowering your insurance rates as a New Driver because of the driving hours done with a professional instructor while you had your driver’s permit.

They used to offer it as a free course in public high schools here before that) But they kept us s**kers in the back row with a fan to keep it from getting too s**key AND we had those old school desks with the chair attached but they had ashtrays where there was probably once inkwells.

We also had a “s**king dock” in my high school that was the loading dock for the cafeteria where we were allowed to s**ke until about 1990.”

“Having to call a girl and ask if she was home to talk!

And the person answering the phone yells “Telephone! It’s a BOY!”

“We had cable, and a remote with buttons and a long cord that connected it to the cable box on the TV.”

“Owning an encyclopedia in hard back book form, either the Britannica or single volume version.

Home computers used to come with an encyclopedia set of disks.”

“Having to do all your banking, in person.

“Getting the disposable camera from Walmart in the bin near the checkout before going to summer camp. Waiting for it to develop your out of focus shots of random trees and people you will never see again.

I remember I even took a picture of the toilet in our cabin once to prank my parents when they developed them.”

“Remember when you as a class could connect with “pen pal” from other places around the country/world as a part of the curriculum in elementary school (grades kindergarten through 5 here locally in Massachusetts).”

“Pre-arranging to meet a friend at x time at y location and having limited ability to change plans at short notice.”

“Popping by the neighbors or your friends just to visit for a bit.

And them probably being home and having time to hang out.”

“Working for one company for life.

My dad just retired after working 42 years at the same company. His father worked for 30 years for that same company.”

“HBO used to be just one channel and it didn’t have tv shows. They only showed movies and they would air more than a year after they had ended their theatrical run.

The coolest thing about HBO in those days was it not having any commercials like the regular tv stations.”

“Collect calls to tell people where you were.

Operator: will you accept a call from “hey mom can you pick me up from wherever”.”