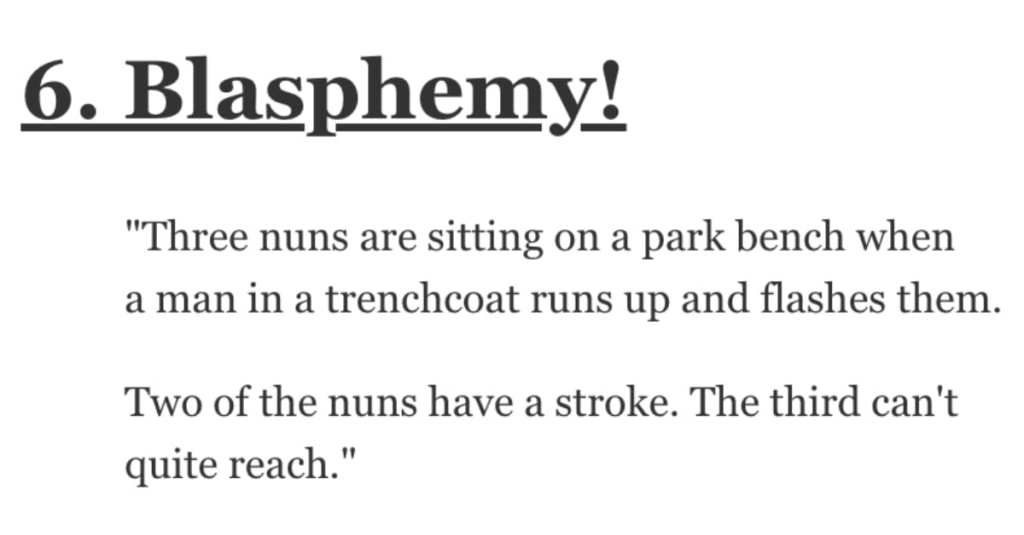 Alright, jokesters, it’s time to have some fun!

That’s right, it’s joke time and we’re gonna laugh (hopefully) at a bunch of funny business from a whole lot of random folks.

Folks on AskReddit got funny and shared their favorite jokes.

“Q: Why did the walrus go to the Tupperware party?

A: He was looking for a tight seal.”

“What do you call a little boy who’s half Scottish and half Nintendo?

“A priest decides to take a walk to the pier near his church. He looks around and finally stops to watch a fisherman load his boat.

The fisherman notices, and asks the priest if he would like to join him for a couple of hours. The priest agrees. The fisherman asks if the priest has ever fished before to which the priest says no. He baits the hook for him and says, “Give it a shot father”. After a few minutes, the priest hooks a big fish and struggles to get it in the boat. The fisherman says “Whoa, what a big son-of-a-b*tch!”

The Priest says, “Uh, please sir, can you mind your language?” The Fisherman responds (THINKING QUICKLY), “I’m sorry Father, but that’s what this fish is called – a son-of-a-b*tch!” “Oh, I’m sorry”, replied the Priest. “I didn’t know.”

“Hmmm”, said the Bishop. “You know, I could clean this son-of-a-b*tch and we could have it for dinner.” So the Bishop takes the fish and cleans it, and brings it to Mother Superior at the convent.

Well, it turns out that that evening, the Pope decides to stop by for a surprise dinner with the three of them. They eat the fish and it turns out to be absolutely delicious. The Pope asks where they got it.

“And I cooked the son-of-a-b*tch!”, said the Mother Superior.

The Pope stares at them for a minute with a steely gaze, but then takes off his hat, puts his feet up on the table, and says, “You know what? You f*ckers are alright”.”

“A blonde is sitting in a shoe store surrounded by at least 50 boxes of shoes. She says to the shoe salesman , “None of these are good enough, do you have some alligator shoes?”

The exasperated saleman replies with some venom, “Lady if you want alligator shoes, go get an alligator.”

Salesman driving home sees the blond on the bank of the river. She is wrestling an alligator. An epic battle. At last, she throws the dead alligator on top of a pile of alligators next to her.

While the salesman looks on in amazement she says, “D*mn, another one without shoes!””

“On Sunday I stuck my hand into a feather pillow and had a rummage around.

I did the same on Monday and Tuesday.

This morning I went to my psychotherapist and told him I’ve been feeling down for a few days.”

“Three nuns are sitting on a park bench when a man in a trenchcoat runs up and flashes them.

Two of the nuns have a stroke. The third can’t quite reach.”

“A rich man and a poor man are both buying anniversary gifts for their girlfriends. “What are you getting your girlfriend?” asks the poor man.

And the poor man says “I’m buying her a pair of slippers and a d*ldo. That way if she doesn’t like the slippers she can go f*ck herself.””

“Old man’s sitting on a porch when he sees a young man walk by, dragging something behind him

Sure enough, later that evening, the young man walks by with a mess of chickens all caught in the chickenwire.

Next day, old man’s sitting on his porch when the young man comes walking by, dragging something behind him

Sure enough, later that evening, the young man walks back with a mess of ducks all wrapped up in the duct tape.

Third day, old man’s sitting on his porch when the young man again comes walking by, dragging something behind him

Old man says, “What you got there?” and the young man replies “Pussy willows.” Old man says “Wait up, let me get my hat.””

“An elderly couple were in church during the Sunday morning sermon.

All of a sudden the wife whispers to her husband, “I’ve just done a silent fart. What should I do?”

The husband replies, “turn up your hearing aids.”

“What’s the difference between a rib eye steak and a meteorite.

Ones pretty meaty, and the others a little meteor.”

“What do you call a child born out of incest?

In the comments, crack us up with some of your own best jokes.