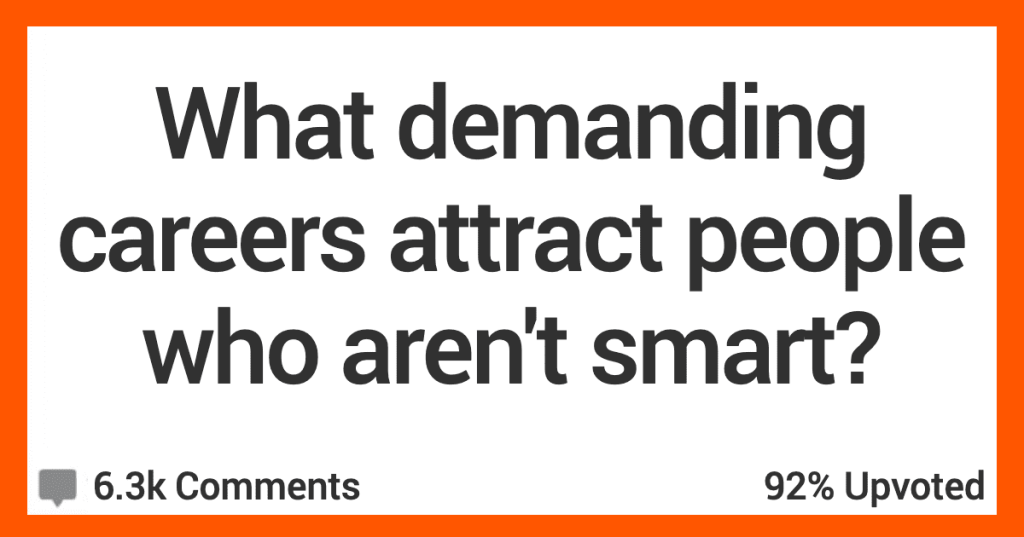 Wow…this is going to be an interesting conversation, no doubt about it…

Because today we’re going to hear from folks on AskReddit about what intellectually demanding jobs they think attract a lot of idiots.

Are y’all ready for this?

“Law. So many idiots running around as pseudo intellectuals who went to law school because they were “good at arguing.”

So many attorneys don’t realize it’s not about arguing and being an asshole for the sake of being an argumentative a**hole, it’s about achieving resolution under the rule of law.

The biggest offenders are the oldest attorneys who have got away with s**t practice for decades and now coast on their names while still practicing like it’s 1982.”

The school admins completely ignored their list and bought a ton of new music stands and smart boards for the band and choir rooms. Now they still don’t have the equipment they need, bit they have so many music stands they had to put all of their old stands in storage.”

But for every one good nurse there’s 5 f**king idiots where you’re amazed they’re considered literate.”

“Finance really runs the gamut from super bright to dumb as a hammer.

Finance is confusing on purpose (lots of acronyms, lots of numbers) and requires salespeople.

That’s a potent recipe for sneaking dummies into an intellectually demanding profession.”

“I speak from real-life experiences. Years of it.

Folks in the military.

For the members of the public who have never served, many view soldiers as these great, brave defenders of freedom. In reality, there is an unlikely amount who could not spell “brave,” “defenders,” “freedom” or even “of.”

There’s a group referred to “ASVAB waivers.” The ASVAB is a test people take before joining the military. The most basic of an IQ test. The max score is 99. A score of 31 (!!!) is all it takes to join the Army. But, there are waivers for people who can’t even get 31. And people get those – especially during wartime.

Yet those same people are able to follow war strategies and complete missions. Unreal if you think about it.”

In a college that offers it and I’ve seen the most intelligent idiots around going for that major.

And I’m one of the biggest intelligent idiots around.”

I taught for seven years. One time we had to read an article and discuss it. The lack of basic logic and philosophy shocked me.

I still respect the profession. There are a lot of great teachers, but lots who aren’t the brightest.

The American education system has its work cut out for it.”

You need a high amount of skill with math, common sense, working with your hands, the list goes on with the requirements you need to just begin in these jobs, yet the amount of goddamn idiots I saw in these positions is hysterical.

The amount of OSHA violations is amazing, especially the ones most people seem to think are ‘too minor’ to be reported.”

Most are college/high school dropouts that handle your personal private information, credit, contracts. I worked in the car business for 6 years across 3 states and I’ve never met a more consistently low standard of employee.

It’s all about getting as much money as you can out of every single customer by any means necessary.”

“I have to say IT

A lot of us are one half step away from needing to wear a permanent helmet.

IT, in most forms, is a very cognitively challenging job.”

11. Not trying to offend anyone.

It’s not all that intellectually demanding but you’d be surprised at the amount of idiots in this field.

Not meaning to offend anyone. There are exceptions.”

“I’ve been working in special education for about a decade now and I’ve found that it unfortunately attracts a lot of complete idiots.

Schools are usually so desperate for support staff they’ll pretty much hire anyway.”