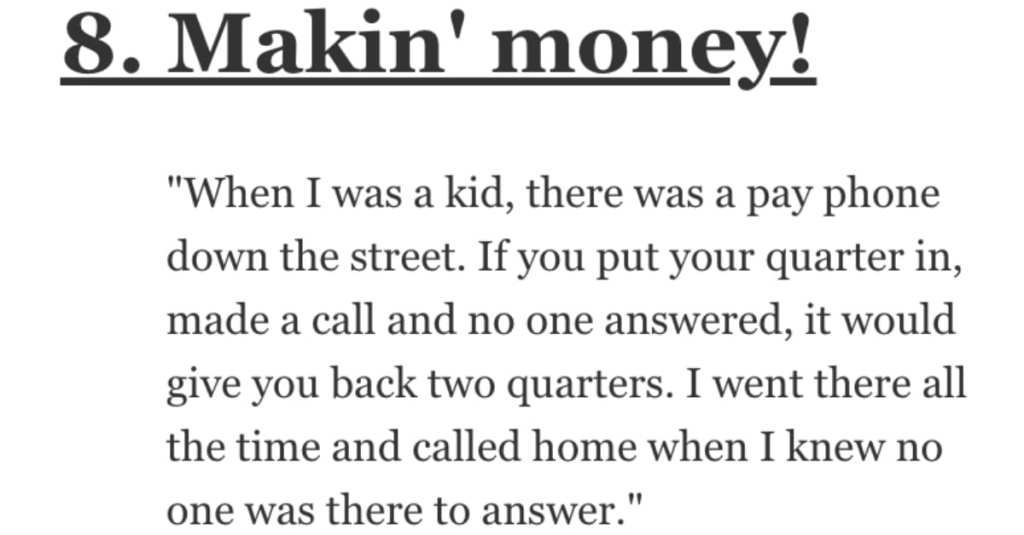 I feel like there is some kind of morality when it comes to loopholes. If you’re getting a little something over on THE MAN or a huge corporation, it ain’t no big thing.

But if you’re screwing over a small business or an individual or something like that, that’s a lot different.

But one thing is for sure: people are gonna take every shortcut they possibly can…for better or worse.

Folks on AskReddit admitted what loopholes they exploited until they couldn’t do it anymore. Let’s take a look.

“Hungry Jack’s (Aussie Burger King) has a “check in on your phone and get a random deal” thing.

A few years back, I ended up rolling a full combo meal.

Took a screenshot and got free food for months because they never checked if it was legit or not.”

“I went to a sporting goods store and they asked me for my phone number when I was paying.

I was in a bad mood and didn’t want to fight with the clerk so I told them our local area code + 555-1212 (which is the old number for directory assistance), clerk accepted it and I left. When I checked my receipt I had a huge number of loyalty points – because apparently a ton of other people did the same thing.

I called the office the next day and switched the “account” to my new address. A half-dozen times over the next few years, I went and got free stuff with all the points that I kept racking up as one of their most loyal customers.”

“Years ago I was a season ticket holder for an awful NBA team. My tickets came electronically via PDF. I had OK seats in the upper part of the lower bowl, but nothing great.

Anyway, on nights where I knew it would be empty (which was most nights unless a superstar like Kobe or LeBron was in town), I would use the full version of Adobe Acrobat to edit the PDF’s to indicate a much better seat location than mine.

The bar code still scanned just fine because I didn’t mess with it, but when the usher took my print out all he saw was that I was sitting on the floor.

Got away with it for years until the team actually got good for a while and the place was packed.”

4. You want fries with that?

“The McDonald’s app used to have an entry in the order book for “garlic parmesan fries” that you only found through the search option. It cost $0.00. Every time I ordered it I got free regular fries.

Also you can set the drink option on happy meals to coffee, which is not really a loop hole, but handy.”

“I was really good friends with my building superintendent (super) at a job I have since left. He was also the super for several other buildings in downtown.

My friend, the super, got a terminal cancer diagnosis and on his last day at the building he gives me an envelope with what appeared to be a parking garage card inside. He said “you have been such a great friend I wanted to give you my key to the kingdom. It should save you a lot of money because it works in every city owned parking garage in downtown.”

I left that job in 2012 and to this day the card still works at over 12 parking garages in downtown. Go see a concert or sporting event? Swipe the card for the O-rena (no longer the official name) garage.

Need to park at the courthouse or city hall garage, swipe the card. Want to go see a movie or go to a club or park? Swipe swipe swipe, free parking day or night.

Bruce you left us way too soon, but gave me a gift that just never stops giving. Miss you buddy, and thanks for saving me a ton of money.”

“Parking meters took credit cards. But they weren’t actually connected to a live network at all times.

The machine just confirmed the card number was valid and was not expired, then spit out a valid pass. So when my card number got stolen and replaced, I kept my old, cancelled card. Of course when the system tried to run the card later it would be declined.

My car and I were long gone by then. Sadly they wised up and now it charges your card before giving you a pass.”

“Worked out how to get the jackpot every time on a Connect 4 fruit machine in a pub I used to drink in.

It would cost about £5-£10 before you’d get into the bonus round, then when you did, you’d play a connect 4 game against the machine.

You place the first counter, and then after the machine places the next counter, you mirror the machines move. Every game ends in a draw, and you win the jackpot, which was £50.

The pub landlord removed the machine after around 3 months as it was regularly empty, basically paid for my drinking and more for 3 months!”

“When I was a kid, there was a pay phone down the street.

If you put your quarter in, made a call and no one answered, it would give you back two quarters.

I went there all the time and called home when I knew no one was there to answer.”

“My friend used to restock condom machines in pubs and collect the money from them.

The machines would always break and get jammed all the time but because it was condoms no one would ever tell someone that the machine ate their money.

He would just count how many condoms were gone and give that amount of money to the company and pocket the rest.”

“When I was in school they sent us home with a form for our parents to fill in. The idea was to collect updated contact information in case anything had changed (phone numbers etc).

If you were late to school, the school texted your parents to let them know. For myself, the usual punishment was a grounding.

I was frequently late, so I filled the form with my own phone number and started to receive the text messages that were intended to tell my parents that I was late.

Got grounded far less frequently after that.”

“One week the local Chick-fil-a put a coupon in a local coupon magazine flyer which was Buy 1, Get 1 Free, any item on the menu. Next to that coupon they had a 50% off any menu item.

I carefully checked, and neither coupon mentioned “Cannot be combined with any other offer” anywhere on it. So I ran out to the local grocery store and grabbed a stack of these flyers. Sure enough the next week the offer was gone, but it was too late to stop me.

I spent almost 2 years as a grad student living almost exclusively off of 128-count nugget platters that I would get for 25% of the cost (1st half off, 2nd free). Place went under new management and they put up a sign saying they would no longer be accepting those coupons.

Not entirely sure if that was due solely to me or if anyone else was pulling the same thing. I had about 20 coupon pairs left when they shut it down.”

In the comments, share some of your own stories about taking advantage of loopholes until you couldn’t anymore.