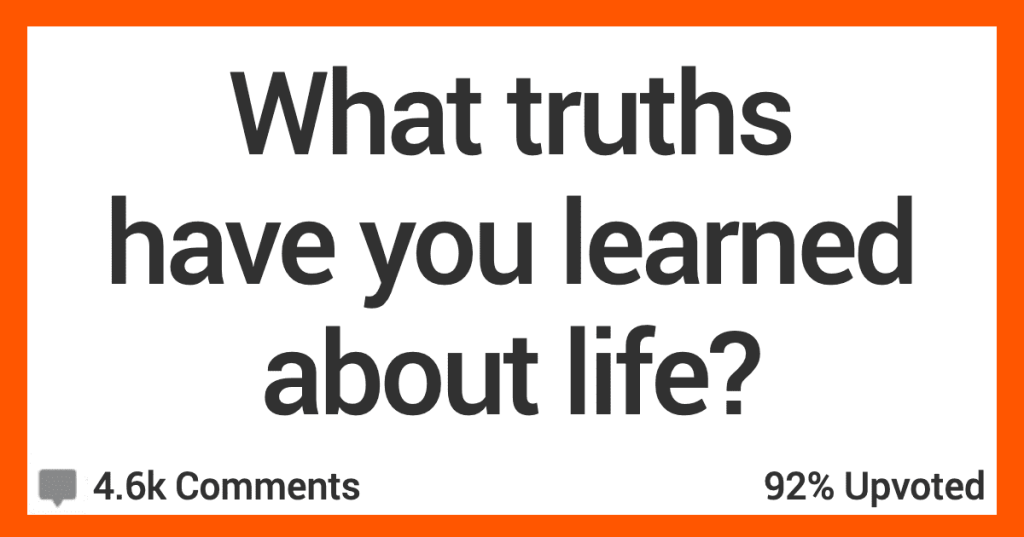 12 People Talk About the Truths They’ve Learned About Life

“Treating people fairly doesn’t mean you will get treated fairly back.

Doesn’t mean you shouldn’t, but never expect it back.”

“That I don’t have to justify my decisions to people.

If it makes me happy and has a purpose for my life that’s good enough for me.”

I started going bald at 23. I had at least some hair for a long while but finally decided I’d look better bald than trying to make it look like I’m not.

“That life is unfair and you just have to continue having the will to live and make the most out of what you’ve got.”

“There will always be someone that doesn’t like you, no matter what, even if you do everything right, they’ll always think you did it wrong.

So don’t try to please everyone and relax.”

“Nothing is more bad** than being calm when most people would be going bats**t crazy with f**king anger.”

“Work is what you do for money.

Time is what you spend.”

“That my workplace is abusively toxic.

“That I can’t make people love me.

Doesn’t matter how much I love someone if they don’t love me back.”

“Doesn’t matter how close you are to someone.

There is always the possibility they can leave you.

Take good care of yourself because you are truly alone.”

“That no matter if I get my diet straight and get a good exercise and lifting routine in place, I’m not going to lose that 20lbs I gained over the summer until I look at the scale every day, track my progress, and take some godd**n accountability

Doing the work in your 40s is a lot different than doing it in your 20s.”

Everyone can be telling the truth and have a different story about the same event, especially because of how fallible memory is and how we tend to skew our view of events based on our biases and preconceptions and other factors like being inclined to favour ourselves and disfavour people we dislike, as well of course because people only know their own mind and not other people’s.

They very rarely do. Usually someone’s version of events is more skewed and more inaccurate than others, if not in terms of memory then in terms of how it relates to the law.”

What truths have you learned in life?