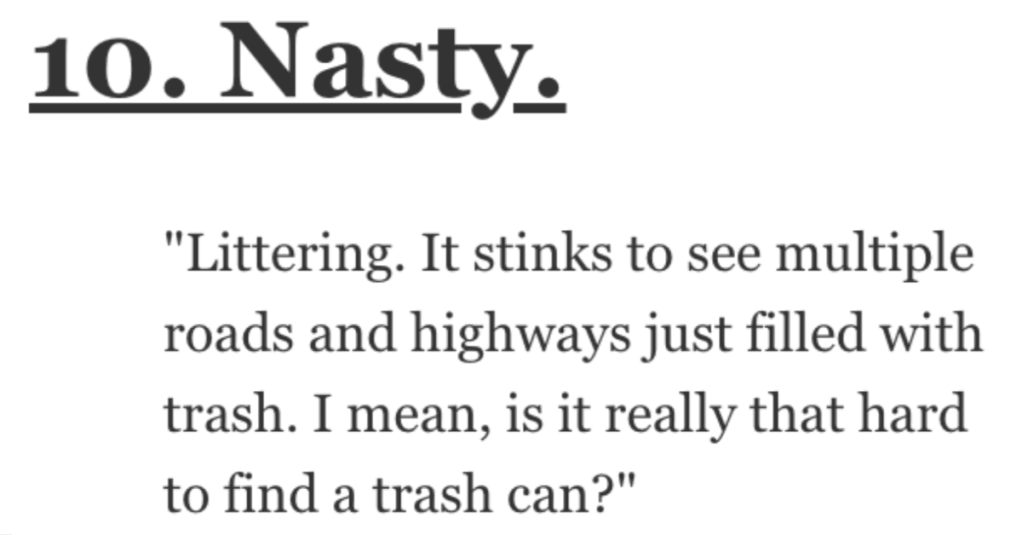 What Immediately Makes You Angry? Here’s What People Had to Say.

Let’s try not to get too worked up today, okay?

It’s a beautiful day outside, so after you read these responses from AskReddit users about what immediately makes them angry, I want you to take a stroll around the block, breathe the fresh air, and calm down.

But first, let’s see what these folks had to say about what immediately makes them angry.

It stinks to see multiple roads and highways just filled with trash.

I mean, is it really that hard to find a trash can?”

“Being rude to service industry workers.

How hard is it to be nice?

I h**e how taking your anger out on a complete stranger is happening more often.”

“When elder relatives are attacking you personally infront of everyone and no one says a word because they are elders even if they are wrong.

Like everyone knows that they are wrong but would still tolerate that behaviour of unnecessarily butting into someone else’s life for no reason.

Were you there to help me when I needed it the most? Did you even ask if I am doing alright? Then why in the world do you want me to live my life the way you want?”

Or place their gum somewhere other than the garbage. I h**e gum. And spit.”

“People who think they’re funny, but are really just annoying.

Don’t try so hard. You’re just making it worse for everyone involved.”

“People that take up the full aisle when grocery shopping, clearly see you coming and don’t move.

Pick a side people!”

“When your SO brings up a bunch of chores, errands, and problems you need to solve right before bed.

Then they proceed to pass right out happy as a clam while you lie awake feeling anxious about all the expectations and obligations they unloaded on you.”

8. A lot of that going around.

“People who have lost the ability to communicate without adding a politically slanted comment into each and every conversation.”

Like they have proof you should vaccinate your kids and that the earth is round, but choose otherwise.”

“When my husband uses the microwave and doesn’t hit the end/cancel button.

So from the couch I can see the screen moving out of the corner of my eye.

Or he forgets to shut the timer off when he takes his food out early.”

Specifically the ones that pull out right in front of you as if they’re in a hurry only to go half the speed limit.”

Everything about them infuriates me. The ridiculous amount of money they’ve made doing absolutely nothing except, you know, being hot. How self righteous they are about their lives. The idea that they are a positive force in the world. The fact they are now, arguably, as famous as actors and singers who have ACTUAL talent and fought tooth and nail to get noticed.

I h**e that they’ve taken over boxing. I h**e their publicity stunts. I h**e their podcasts, as if they have something so important to say that they need to have one. Hell, I h**e the word influencer. Your a TikTok w**re. Call it as it is. There’s more I just can’t be bothered.

I h**e them. They are a blight on the internetscape. Most of them are scammers who will do anything for attention and money and most of them are little more than late teen/early twenty year olds who act like they have more wisdom than Gandalf the f**king Gray simply because they’re A) Hot and B) Have money, money I don’t believe they deserve.

What I h**e just as much is how the world has normalized them so much now. If I see one in any context I have to shut down whatever it is I’m doing and move onto something else.”

What do you have to add to this conversation?