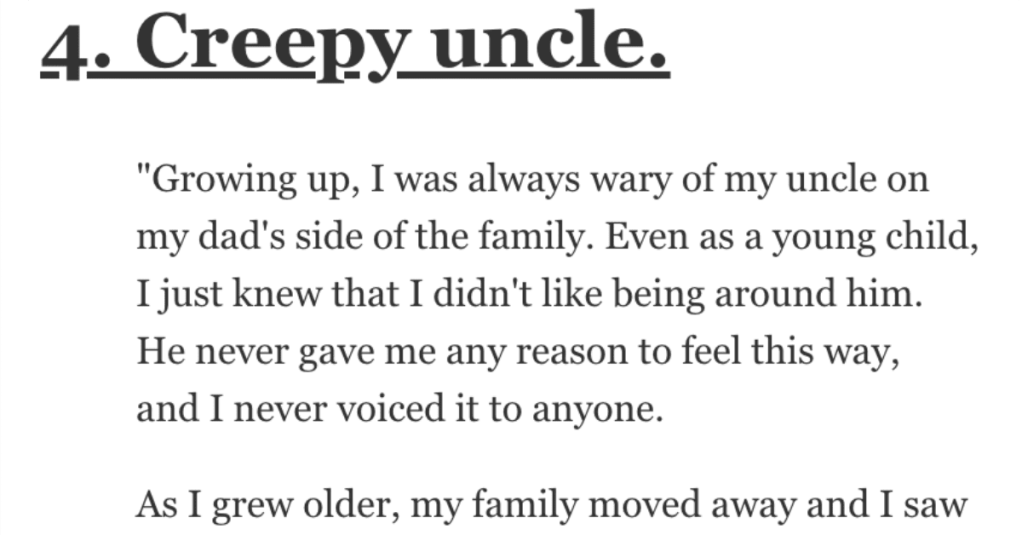 Have you ever had an experience where you knew something was really wrong and you turned out to be right?

Maybe it’s about a person or about a potentially sketchy situation, but you know when your gut tells you that something isn’t right.

Folks on AskReddit talked about when their gut feelings turned out to be right.

“Spent two years itching for no reason. Hypochondria gut told me it was cancer. Further research confirmed it for me.

Told doctors for two years I had lymphoma. I was right, but they didn’t figure it out until I was stage 4 advanced.”

“When I was a young kid back in the 1980s I was playing on my front lawn when this van pulled up on the road and the sliding door opened.

A guy about 19-20 aggressively waved at me to come to the van and I immediately knew something wasn’t right so I ran inside and told my parents and they freaked out and ran outside but they were gone by then..

Stranger danger wasn’t really a thing back then and I had no idea what an abduction was at the time but looking back on it my life could’ve ended that day had I chose to go over to the van. I often wondered after that day if they ever did get a kid to get into their van.”

“Last year, I was staying up late watching Rick and Morty. My mom had been battling stage four metastatic breast cancer for a while.

That night, she walked downstairs and just sat there with me until I decided to go to bed. I looked at her and in my heart I knew she was close to leaving. So I said goodnight. And she said goodbye, which confused me.

Until the next morning when my dad woke me up and told me she had passed away over night. It still makes me wonder how we both knew.”

“Growing up, I was always wary of my uncle on my dad’s side of the family.

Even as a young child, I just knew that I didn’t like being around him. He never gave me any reason to feel this way, and I never voiced it to anyone.  As I grew older, my family moved away and I saw less of him, but anytime my extended family met for holidays I would see him and avoid him.

Couple years down the track, I was around 12 or 13 when my parents sat me and my older brother down and told us that my cousin (my uncle’s daughter) had been r**ed and mo**sted by him from a young age.

This had all come to light when my aunt caught it happening (later found out she was abused by him too). Really wish my gut feeling hadn’t been right about that one.”

“The woman who became my former best friend’s step mother. Met her and had instant alarm bells going off in my head that said “keep away from her”. I ignored them because c’mon, friend’s dad isn’t an idiot and he dated her for a year.

My gut was more than right. That woman made Cinderella’s step mother look tame. She would throw things at my friend’s dad, she would scream at my friend. She blamed everything on my friend, even when there was no way she could prove it. She even verbally abused her own biological, autistic, son.

She once screamed at me, and when my mom confronted her she screamed at my mom. My friend was the scape goat and virtually a slave. She called her lazy for being tired after working two jobs and going to college full time. She tried to get the wifi shut off so my friend “would stop wasting her time playing on her computer all day” when my friend was actually doing homework.

She is a monster, and I’m pretty sure she’s the reason my friend cut ties with me and all our mutual friends She had to get away from anything and everything that reminded her of that monster.”

“Had a gut feeling my sister relapsed in her drug/alcohol addiction.

Through the Pandemic, We usually talked about once or twice a month, but we went a couple month without talking. I put it on my schedule to do visit her.

Turns out, not only did she relapse, but beat up her daughter for m**h money. Tried to rob our parents.”

“I was a twenty year old student, alone in my apartment one evening.

I was expecting the cable guy so when I heard a knock at the door I opened it. I saw an older man that definitely was not the cable guy as he did not have a uniform on. I asked him what he wanted. He said he was going around the apartments installing security alarms. I right away did not trust him and told him that is was a bad time and that my roommate was on the phone long distance( when long distance was expensive) with her parents and was going through some personal stuff.

She was not there but I did not want him to think I was alone. He said where is she….I just closed the door in his face and said not a good time. I called my landlord the next morning and asked her about installing security alarms and she had no idea what I was talking about and did not authorize it.

Women, if you ever get into a situation where it looks like you are alone really try to convince the person that is making you feel uneasy that you are not alone. Another time when I was young walking home in the dark and two men stopped there car and started saying lewd things to me I just walked up to a house and knocked on the door and they drove off quickly. Way more vulnerable when you are alone.”

“When I was 13, we went to an outdoor school camp for a week.

The week included an overnight canoe trip. I went with my best friend, and the morning of the trip I had a horrible feeling that things were going to go badly and that we should stay back but I ignored it because I was 13 I was doing what I was told.

Long story short, our boat hit a log jam, we went under, I came up, my best friend didn’t. She d**d on the logs that day.”

“One of my last weekends studying abroad in Costa Rica.

My friend / classmate wanted to go out drinking / dancing, but I and the rest did not as we were tired. Friend convinced me to go as it was one of the last times we would get to. I didn’t feel right the entire time I was getting ready. Just terrible gut feeling. As I was walking to the bus stop to meet him, a huge wave rushed over me & I thought “I’m going to be robbed tonight”.

I wanted to turn around, but my friend saw me at the moment & we just continued on. We got kidnapped / robbed that night, and it was terrifying. I will never ever not listen and react to my gut feelings again.”

“Freshman year of high school, we had this really weird digital arts teacher.

He’d go up and randomly massage students shoulders, and make comments like “How about you and (other student) take your anger out in a mud pit?”, or similar things if students argued with each other. He was just genuinely weird, standing over students, mainly girls, and just very handsy..

A few months into the school year, they transferred everyone out of the class, and we didn’t see the teacher any more. Some of us went to wood shop, or metal work, etc. but that teacher was just gone. I don’t actually know what happened to him, but I can only assume that what he was doing finally got to him.”

“Was with my mom in the woods in eastern Quebec.

I heard something break a rather large branch just over the hill maybe 50m away. I told her we have to leave right away because I think it’s a bear. She tells me how no bears been in area for 20 years.

She listens to me anyways and we go back down the mountain and home. Next day a bear was hit by a car just on other side of mountain.”

“When I was a young woman my husband and I lived on a military base. At the time, the base was wide open and many local people used it as a shortcut from one town to another.

The base also had free base newspapers available at many places on base. One week the newspaper said that Facilities Engineers (base maintenance) were going to begin installing attic fans in our townhouses.

Sure enough, someone banged on my door later in the week and announced that he was there to install my attic fan. I was immediately suspicious — he was not military, dirty, scraggly beard, paint-stained clothes. But mostly it was my dog’s reaction. Candy was a husky-shepherd mix, so not a small dog. She’d put herself between me and him as best she could, her hackles were up, and she was growling, that deep bass in-the-chest growl that you feel more than hear.

I asked to see a work order and ID. He said “I don’t need no f**king work order” and yanked open the screen door. (It was latched, but those kind of latches are meant to keep toddlers and dogs in, not grown men out.)

They came out, verified that my street was not due to get attic fans for a couple of weeks, and took all the information I could give them, which wasn’t much. I never heard anything back, so they probably never identified him.

Two or three weeks later, the real installers came from Facilities Engineers, in uniform. They promptly produced work orders and ID. Candy looked at them and went back to playing with the baby.

I’m absolutely certain that she saved me from r**e, possibly from m**der.”

Do you have any stories about trusting your gut?