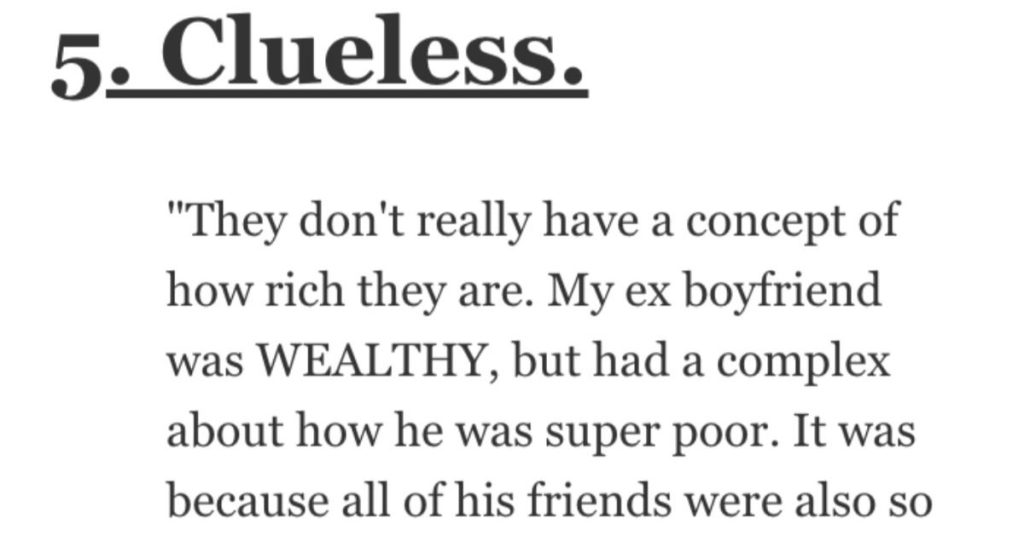 It can be kind of weird to date someone who is in a drastically different income bracket than you are.

It’s sad that money can divide us like that, but it’s how the world works.

Let’s hear from poor folks on AskReddit who dated rich people and revealed what they learned from their experiences.

“They don’t know how to cut back because they only knew the good life.

No sweetheart, we don’t need 3 vacations a year when you are f**king unemployed.”

“My ex was having problems with roommates at university.

Her parents bought a $300,000 condo for her to stay at while she finished her degree (2 years). They sold it for a profit immediately after. I can’t imagine not only being able to solve my problems with money, let alone make more off of them. She also assumed her family was lower middle class because she didn’t live in a mansion like her friends.

She was very humble and was smart with her money, but it was very clear she could just call her parents if something didn’t work out. Meanwhile my parents were struggling to pay rent, meaning I was their fallback. Not the other way around.”

“My fiancé always has said that he was upper middle class. His parents drive 10+ old cars, haven’t updated their home in forever. Will only buy LL Bean on sale. Slowly I realized that wasn’t the case.

I especially realized that the case when they just gifted us $200k a few days ago. My dad was an army officer and my mom a teacher, I literally have no idea the world I’m walking into.”

“Dated a man who didn’t work – lived off of a TrustFund. Oddly, since he could afford nearly anything – nothing had any value.

He’d buy a $400 KitchenAid mixer – and burn it up making Christmas candy the first week. If he decided to make more candy – he’d just go buy another $400 mixer. Nothing meant particularly ANYTHING to him.”

“They don’t really have a concept of how rich they are.

My ex boyfriend was WEALTHY, but had a complex about how he was super poor. It was because all of his friends were also so wealthy, and he was maybe marginally less rich than some of them, he considered himself on the lower end of the scale.

They don’t really have a point of reference for how poor some people are. When we were together I was living on a food budget of £50 a month, and he absolutely could not wrap his head around how a person could spend that little.

I lived with a horrendously rich friend, his family are aristocracy in his home country. One thing I’ve noticed about him is that he’s completely incapable of grasping that if I stop working, I just stop being able to eat.

He was confused about why I was worried about taking a week off work, and didn’t understand I was worried I’d lose money. He seemed to think that most people work because they choose to, because he’s never had to work.”

“On a Friday night whim my GF decided she wanted some pie. I suggested we go down to the store. She rang her favorite restaurant and had a chef bake her her favorite pie.

The cost $170. A pie. Yes, she could afford to do it but the problem was the complete lack of value. Nothing really mattered to her because she had that kind of money.”

“I only went on one date with him.

He booked out the entire bowling alley so we’d have privacy for our date. It just seemed so shockingly wasteful to me, and it was bizarre to have a 20-lane bowling alley just to the two of us plus a fair sized staff who were left with nothing to do but look after us.

I learned I’m very uncomfortable with that level of casual assumption that the world will rearrange itself to suit my whims.

Also he had absolutely no respect for personal space. I don’t think he was used to women not liking to be touched by folks they barely knew.”

“I’ve thought about this a lot as someone who grew up poor, but has been in a number of relationships with women from upper or upper middle class castes.

I think what it boils down to is that they have a kind of certainty in the idea that things will work out for them that I don’t. Growing up, it felt like we were always at the precipice of catastrophe. I always felt that one wrong move would result in us losing our house or all of our money.

As such, I kept immaculate care of things that I bought knowing that I could not replace any of it if it were gone. The women I’ve been in relationships with, though, seem to have none of this fear. They always assume that things will work out.

Plans don’t need to be made because there’s always some way to solve a problem with money. Objects don’t get much respect because they’re always readily replaceable.

I always think about Nick Carraway’s quote from The Great Gatsby: “They were careless people, Tom and Daisy–they smashed up things and creatures and then retreated back into their money or their vast carelessness or whatever it was that kept them together, and let other people clean up the mess they had made.””

“Dated a girl for 3 years who came from old money.

She was fine but her family was beyond out of touch with the real world. They were nice people but incredibly removed from the rest of the world.

They looked at me like I was zoo animal in the sense that they were so curious about my life/family. They’d ask me what it was like going to public school. How my parents immigrated. They were baffled that not everyone had vacation homes or traveled a lot.

The most interesting thing is that old money is much more powerful than new money. They belonged to these “clubs” that consists of other rich families and the influence they had was mind-blowing. Want to build a factory in an area not zoned for it? Within a week that was changed.”

It’s like the other side from the ‘it’s expensive being poor’ concept. It’s this weird internal community of people with money, and thus power, who are willing to make things happen as long as you’re ‘in’.

I mean, I would meet people at a fundraiser or something and five minutes later, they’re happy to make a call that will get me a job at some huge firm. Or like, my then-boyfriend would say let’s go this concert.

Tickets are $180 but it’s okay but a friend’s parents have a box, so we’ll just join them. Or even one time the dishwasher in our flat broke – but we didn’t have to pay a dime for repairs, because his friend from high school’s parents own the building, so they’re fixing it for free as a favour.”

“My ex built a new loft above her business and originally it was supposed to have an elevator from her master bedroom to an office. It wasn’t installed at first because of cost issues.

Well she blew out her knee and it was very difficult to go up and down the stairs. Her friends called her and were like, “we called the guy and he’s going to install the elevator tomorrow. Just pay us back whenever.” It was 25k, which included 7k rush order.”

“I married into this and it’s still an adjustment. A family friend of my wife’s gifted us a honeymoon.

I had been planning something, put money away, was budgeting for a nice trip in the States. 3 months before the wedding she tells me these people want to fully cover a week’s honeymoon in a suite in the Caribbean for us.

We gladly went, I thought it was super weird, but my wife thought nothing of it.”