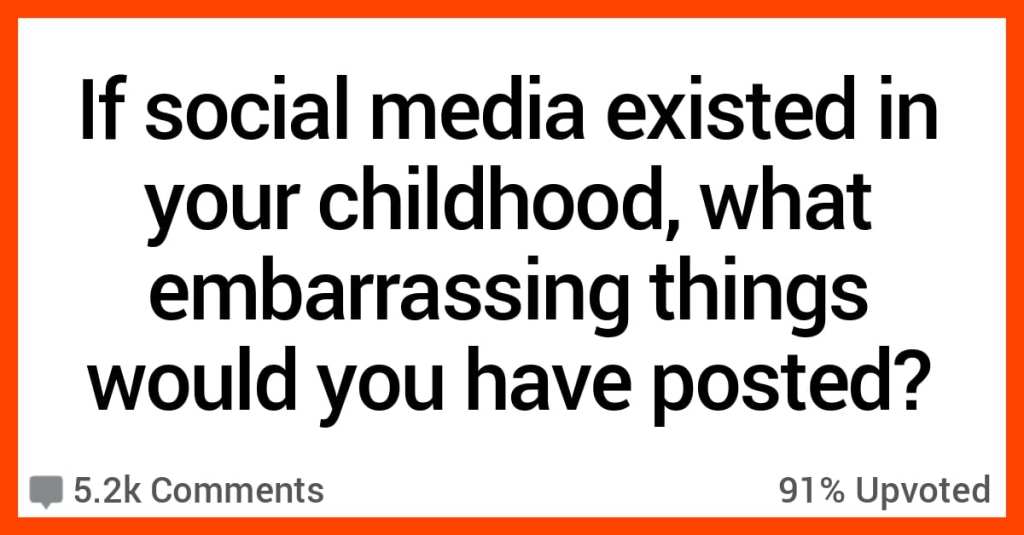 They’ll never know what it was like to just head out on a Friday night with no plan in mind and just hope you ran into the right group of people so you could have a fun or exciting night.

These youngsters know what’s going on with all of their friends every second of every day because of social media and cell phones…and everything that you do is now on video for the whole world to see.

I’m pretty glad that wasn’t my experience growing up…because it probably would have been ugly.

Folks on AskReddit talk about the embarrassing things they’d be popular for if social media was around when they were growing up.

“I was in secondary school in science and started to feel queasy.

I put my hand up to go to the toilet, the teacher screamed at the boy in front of me and I spewed everywhere. I was mortified.

I puked right next to my crush. I’ll give my classmates their due I didn’t get teased for it.”

“In my first s*x ed class, we were talking about what happens when you go through puberty, starting with girls. A girl from the back raises her hand and says “you get boobs”.

To explain, I was very isolated, we had no TV at home, and the word “bo*b” just simply wasn’t in our vocabulary.

Plus, this was shortly after switching schools and languages. But let’s not kid ourselves, this would have been all over social media regardless.”

There was an old wooden play set in my backyard. I don’t remember what happened to piss my dumb*ss 9 year-old brain off but let’s say I fell off of the play set. I blamed the play set itself for my own incompetence and grabbed a metal baseball bat that was laying close by.

I put my arms above my head and swung the bat downwards toward one of the play set ladder rungs as hard as I could.

I did not win.

The metal bat came back toward me and hit me square in the forehead. I laid there unconscious for a while and when I woke up I had a huge lump where my forehead used to be. That lump stayed with me as a reminder of my defeat for at least a week.”

“I burned my house down to a crisp when I was 4.

The news channel attempted to interview me (a 4yr old) and all I kept saying was “I like Fire”.

My brother had to pull me away from that situation…”

“Getting stuck in a tree during recess.

Next period was sports, so everybody from my class was outside, able to watch the teachers trying to lift be out.

About 15 minutes later a fireman got me out with no effort at all and one arm.”

Running from the police wearing nothing but Doc Martens, a Costco hat and a cast on my right hand.

Jumping a fence as best I could only to catch the toe of my boot on a picket and fall directly into some fitzer bushes, getting myself untangled only to fall into some more fitzers in the exact same yard.

7. Who let you out of the house like that?

“Wearing only a jacket and bra in 8th grade…

Then accidentally having the zipper pull down to reveal me in just the bra.”

“I was caught jumping up and down on my bed in my tighty whities singing the “Gilligan’s Island” theme song when I was maybe 7 or 8.

“I was 14. Dropped off at mall wearing white pants

Went to nearby toy store. Decided to take shortcut back to mall through a ditch. Slipped and fell in mud.

Walked around the mall for an hour waiting for parents, while looking like I had sh*t my pants bad.”

“My entire 1990s mall goth-Marilyn Manson with black fingernails phase would be everywhere.

11. Were kids just puking everywhere back in the day?

“Vomiting all over the classroom and hallways of my new school on the first day of Grade 5.

My mom told me it was just “nerves” and sent me to school with the stomach flu. We were all sitting in a circle in the reading area of the class when I started spewing.

I ran out of the classroom into a school I had never been in before and had no idea where any bathrooms were just trying to hold the sick in my mouth.

I did not succeed. Great way to make a first impression.”

“I was walking down a muddy hill to and got run over by one of those big gymnastics donuts.

Basically just flattened into the mud. Left a little imprint and everything. Everyone else ran sideways out of the way, like an idiot I just kept running straight til it caught my heels and brought me down.

“Giving the Heimlich to the wrong actor at the wrong time during a school play.

He also wasn’t even choking, but I insisted that he was choking while I repeatedly gave him the Heimlich.

He was just talking to someone onstage while I came out of nowhere. Everyone including the teachers were ROFL.”

What kind of hi jinx would you be famous for if social media was around when you were growing up?