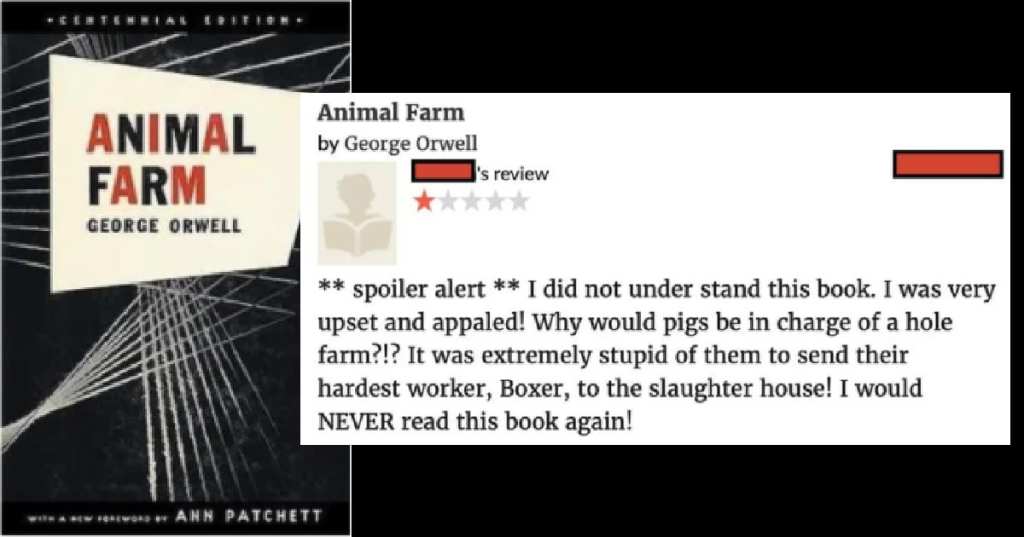 They say things are a classic for a reason, and generally, that’s true. But when it comes to classic novels, the reasons they could be considered classic – like they were written during the transition from Tsarist to Communist Russia, for example (looking at you, Anna Karenina) – might have nothing to do with how good a story you’re about to read.

That doesn’t hold true for all, or even most classics. The majority of them are excellent books and real merit, but no matter which type of classic you’ve got, there are people who will be fed up with reading it.

For all sorts of reasons.

That’s how, I assume, these 13 hilariously irreverent reviews came to be.

13. I hope this person is going to be part of some followup discusssion.

Animal Farm: The Most Difficult Novel of the 20th Century from BadReads

12. I mean, that would have simplified things.

Then there wouldn’t be a book, though.

I don’t care how bad it is, we don’t throw it out!

But the choice of person in the graphic makes me think the reviewer knows this….

Moby-Dick: Book about whaling has too much information about…whales…?! from BadReads

9. What is the lesson here?

I feel like you should be able to parse a children’s book.

Missing the point of a children’s book from BadReads

Kafka on the Shore: Drinking Milk is Weird from BadReads

7. It’s hard to argue with the sentiments.

Not sure they actually work as a review, though.

Men are whiny babies from BadReads

The line about Rick Riordan made me wheeze.

The Catcher in the Rye: Please explain this book that middle schoolers are routinely able to explain with little difficulty from BadReads

4. Wow, really dug deep for that one.

This is one of the less boring classics, so good luck my friend.

3. Some choice words for Jason Derulo, too.

He’s got shade to spare.

Hey, Homer, ever learn what a "run-on sentence" is? I guess not. from BadReads

I will admit it’s not good when the audience just wishes you would die.

"… just hurry up and finish dying." from BadReads

I love some of these books and I’m still cracking up!

Which of these feels like you feel about one of these books? Tell us in the comments!