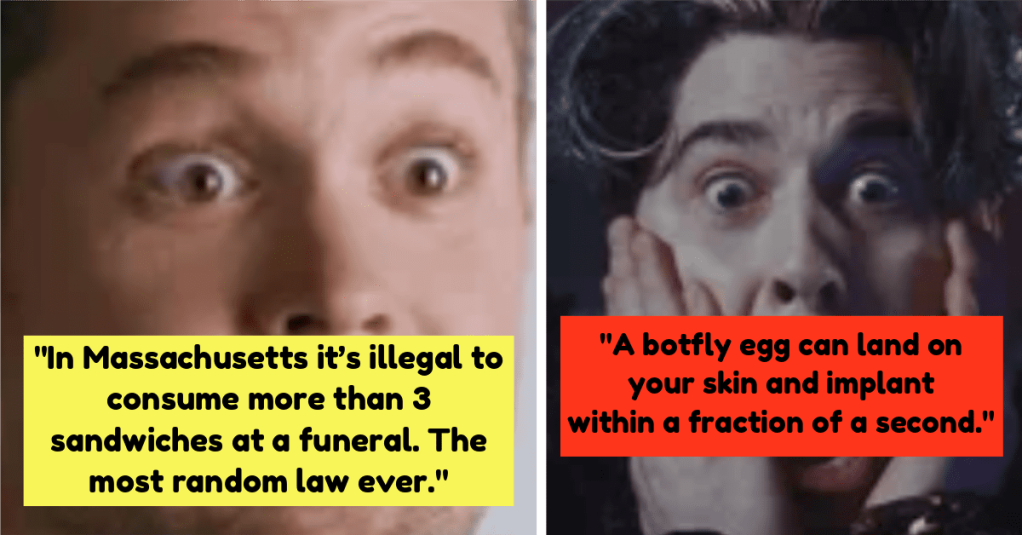 13 People Admit the Strangest Facts They Have Committed to Memory

We all have those tidbits rattling around in our brains that we really have no earthly reason for knowing…but that’s the good stuff, baby!

So what do you say we have a grand old time and hear from folks on AskReddit about the strangest facts that they know…for some reason?

“Penguins feet don’t freeze because their arteries and veins wrap around their feet internally in counter currents to heat the blood and prevent tissue from freezing.”

“In Massachusetts it’s illegal to consume more than 3 sandwiches at a funeral.

The most random law I’ve ever heard about.”

“The annual migration of birds was only discovered in 1822 when a stork turned up in Germany with a 30-inch African spear through its neck.

Before that, we seriously thought migratory birds slept at the bottom of ponds or flew to the moon for the winter.”

“A botfly egg can land on your skin and implant within a fraction of a second.

If one hits you in the eye, it is possible that it can implant the egg under your eyelid so your eye incubates and subsequently feeds the growing larva.

I know this because I have removed one from the underside of an eyelid before from a patient with a recalcitrant “eyelid infection”.”

“Koalas are the most alien of all mammals on the planet.

They have two thumbs on each hand, three vaginas, spend most of their lives asleep, and evolved to only eat one plant that has no nutritional value.”

“The woman who voiced Muriel on Courage the Cowardly Dog was married to the guy who played drums on the Beatles song “Love Me Do”.

“Kuru is a neurodegenerative disease that causes loss of muscular control and and other symptoms that may appear as insanity, and is caused by eating human brains.”

“The US lost 65 nuclear weapons during the Cold War and had specific names for the situations. An ‘empty quiver’ was a weapon that had been lost or stolen.

The US too intentionally released radiation into the local environment from the Hanford nuclear site in the ‘Green Run’ in 1949, which lent Call of Duty the name for the map and location for Tranzit in Black Ops II.”

“In the U.S. small marshmallows are considered “food,” so they’re exempt from sales tax.

Large marshmallows are taxed as candy.”

“The Romans used to paint the insides of their rooms black because the lamps they used for lighting would stain the walls.”

“There’s more kind of bagpipes in France than the whole British Isles.

Bagpipes likely came to Scotland via the Norse

Scottish bagpipes are a B flat instrument that only plays the D scale.

Most European and many Asian countries have some National form of bagpipes.”

“Tomatoes are not native to Italy. They were brought to Italy and Spain from North America.

This blew my mind, when you think about how ingrained tomato is in the world’s mental image of stereotypical “Italian food”: baked and/or boiled pasta with cheese and tomato sauce.”

“There are more plastic flamingos in the world than real ones

Mr. Rogers personally replied to each piece of fan mail he ever received.

It takes a sloth a whole month to travel 1 mile across ground.”

Do you have any weird facts rattling around in your head?