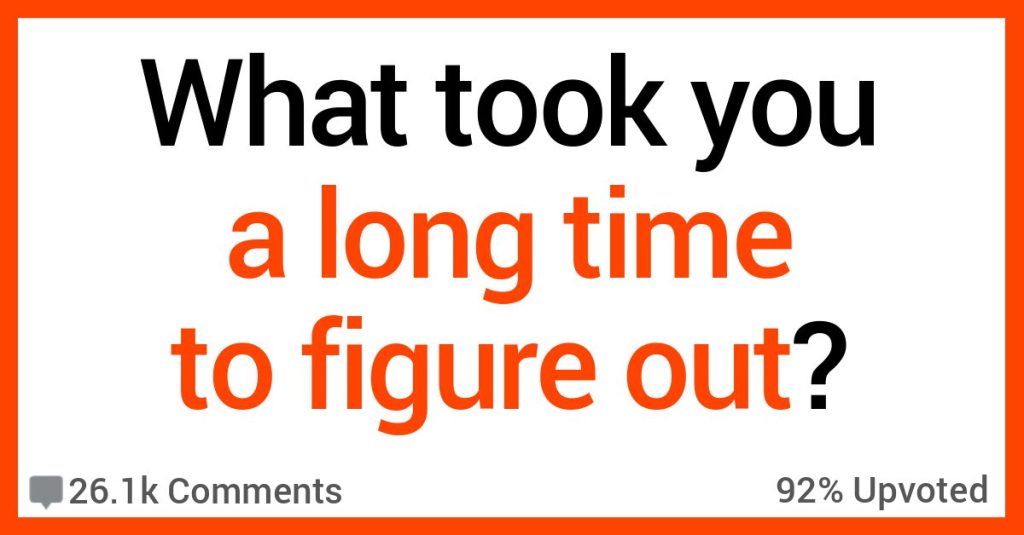 None of us like to admit to this kind of stuff, but today a bunch of folks of gonna come clean…

About what took them WAY TOO LONG to figure out!

This is gonna be fun!

Let’s take a look at the responses!

“That the state Montana is literally the word ‘mountains’ in Spanish.

Didn’t realize until I was physically in Montana, staring up at some mountains, and thought ‘wow! Mountains are so pretty! Montañas… Montanas… montana, oh.’”

“Rocky Balboa was not a real person.

Think I was 17 or so when I found out he was a fictional character.”

I thought it meant the temperature inside a car.”

4. Right over your head.

“The Blink 182 album “Take Off Your Pants and Jacket” is a pun about j**king off.

When one cries crocodile tears, it means they are faking being sad. Crocodiles do “cry”, but the purpose is lubricating their eyes.

I thought that it meant someone was REALLY sad, and crying really big/a lot of tears. My logic was that if a Crocodile cried, those would be some big tears. Crying crocodile tears must mean someone is very sad!”

“When you do something wrong but with enthusiasm, and someone says, “A for effort,” I didn’t understand that it meant an “A” as in school report card grades.

It never made sense because in my head, “E” is for Effort, like “C” is for Cookie. I finally had someone explain it to me sometime after I turned 30.”

“I didn’t learn how to use a water fountain (those things you step on) ’till 7th grade.

I was always just standing in front of it awkwardly waiting for water to come out.”

“That NSFW meant “Not safe for work.”

I always knew it was a tag for explicit content but It took me too long to learn what the actual acronym stood for!”

9. What’s wrong with this thing?

“When I was a kid I happened to pull on the coat hook in our station wagon at the EXACT moment my dad honked the horn.

I spent years yanking on that hook trying to make the horn honk.”

“I was 26 years old when I realized that my mother’s name is Betty and her sister (who is a fraternal twin of hers, also something that I didn’t know) is named Wilma.

Wilma and Betty. From the Flintstones.

Also, I have two sisters, Serena and Samantha. From Bewitched.”

“That a bar exam is a law thing and not related to running a pub/bar or serving alcohol.

I just found that out last month…”

“My wife and I were discussing Thanksgiving plans one year.

She said “Thanksgiving’s on a Thursday this year.” We were both in our early 30’s and had lived in the US all our lives.

I laughed my a** off and she had no idea what was so funny.”

“So I am a lawyer (relevant for story) the city I used to work in had an old federal courthouse with a bar in it called the Ill Eagle.

You already figured out the pun right? …did it take me until I went inside? Did it take someone saying it quickly so it sounded like they were saying ‘illegal’?

…No. It took WAY longer than that, as in multiple months.”

What took you a long time to figure out?

Talk to us in the comments and tell us the truth!