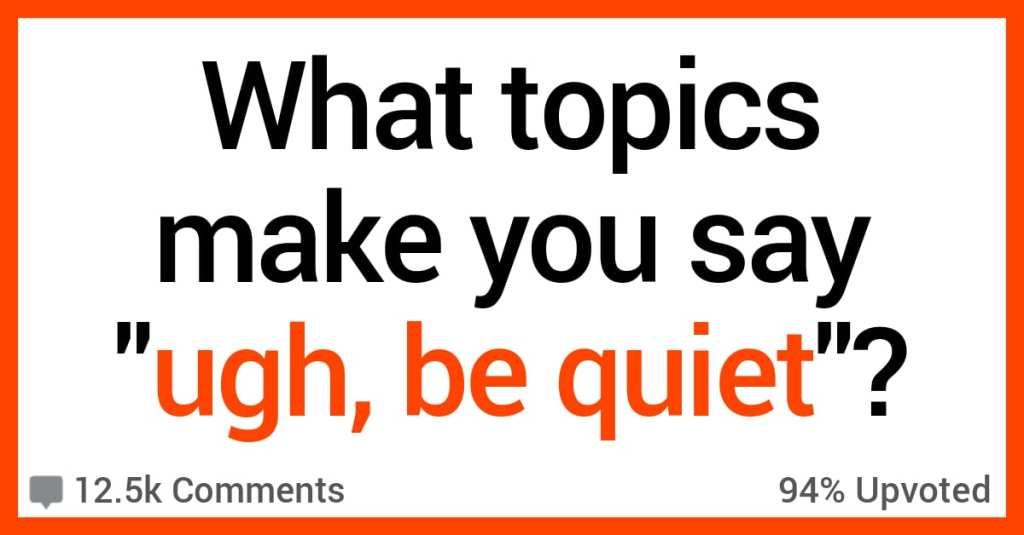 13 People Admit What Topics Make Them Want to Say “Just Be Quiet!”

I appreciate the fact that a lot of people are obsessed with video games, but I just can’t listen to it.

In fact, it kind of makes me want to plug my ears and say “ayayayayayayaya” like a 5-year-old who doesn’t want to listen to their parents.

And we all have things like this that we don’t want to hear about!

Folks on AskReddit admitted what topics make them want to tell people to shut up.

“The new “socialite”. People who are known for being known…

I wouldn’t even mind so much if that’s where it ended, but it doesn’t. People LISTEN to them. Despite most of them only having the skill of being famous somehow.

Let’s use our time watching them, listening to their advice and trying to be as much like them as we can…

You can’t REALLY blame them, because free money, but how do you live with yourself, knowing your job in life is to spout bulls**t all day.”

“My coworkers are so dramatic, it’s rare I get a second of peace without having to hear someone screaming about what this other person did.

I’m like, guys- we work at a pizza shop, nothing could be that serious.”

I have a brother and used to share a place with him and his then partner. A friend of my brother’s used to drive 15 mins out of his way to go to our place after CrossFit to a) smoke with my brother and A) talk about his workout or absorb attention while my brother’s ex fawned over his development. Waiting out traffic on the highway, as it were. Never, NEVER stopped talking about it, there was no conversation he couldn’t stain with his vanity.

One day, I s**t you not, I get home and make myself a snack and CS isn’t far behind showing up. My brother and his ex are on their way out, so I assume this guy will make his visit short because they are leaving and despite the fact that we were cordial, he and I weren’t personal friends nor did we share common interests.

The others have left and I’m really interested in my food, to avoid any contact with him because I know what’s coming. Peripherally, I can see him, feel his eyes trying to get me to acknowledge his existence- like a puppy in obedience training shaking in readiness for a treat.

The second- the very second I lock eyes with him- this motherf**ker stretches his arms and starts groaning about his workout. Jumped right in like a pro f**king double dutch champion, this dude. I straight up, dead-nuts halt him and tell him, “you can hang out as much as you like, but I do not want to hear about your work out. I could not care less”.”

“I find it far more annoying when a person constantly makes political statements but then gets annoyed when you start a debate about it because “I don’t want to argue with you about this.”

If you’re going to mention politics, you’ve opened yourself up to civil discussion and you can’t be annoyed when I ask you about your opinion in a polite way.”

“When very young (mostly white) people try to start a racial conversation with me (a black woman) about something that is really not offending me and I don’t consider racist.

The newest one was thinking that white women calling black women “queen” is r**ist. No, it really isn’t. It doesn’t bother me. Call me queen all day, I don’t care.

Can we fight real injustices before we start nitpicking stuff that isn’t really bothering anyone?”

“When people divert any conversation to themselves.

I literally called someone because i really needed a friend in that moment and after i said i needed to talk about something serious, they started talking about their day at work and some rude customer who offended them.

7. Some weather we’re having.

“The weather. If we’re talking, we’re in the same vicinity.

We have the same weather, so telling me it’s cold/warm today it’s kinda “stating the obvious”. I don’t know why that kind of small talk is so common in society. Like, why weather and not I don’t know…

“Hey, that wall is very blue!”? To me those statements are about the same, but for some reason saying “It’s cold today!” is deemed normal, while saying “That wall is blue!” would be met with weird looks.”

“Can we break this down to anyone who makes anyone one thing their entire personality?

A single hobby (Gaming I’m looking at you)

“Keto or any fad diet.

Had a roommate who talked about diets constantly and how good the “insert diet of the week” is. Oh yeah they worked SO well.

She never got below 400 lbs (no exaggeration).”

“What people ate today. The current fast they’re doing. How they’re following the crowd in this exercise fad.

How people are like oh my gawd mentally brain damaged if they don’t eat healthy. Of course, they sell MLM products.”

The game is so dull and some people are unable to speak about anything else.

I have this straight edge guy at work that will only talk about baseball.”

I’m glad you like it, but I don’t care about it, please for God’s sake stop talking about it I’d literally rather discuss d**ned near anything else.”

“Other parents sounding proud of themselves for setting hard limits on screen time.

I feel that it misses the point; You do not want to limit that kind of distraction as a parent but instead teach the child to handle their responsibilities.”

In the comments, tell us what conversations really drive you nuts.