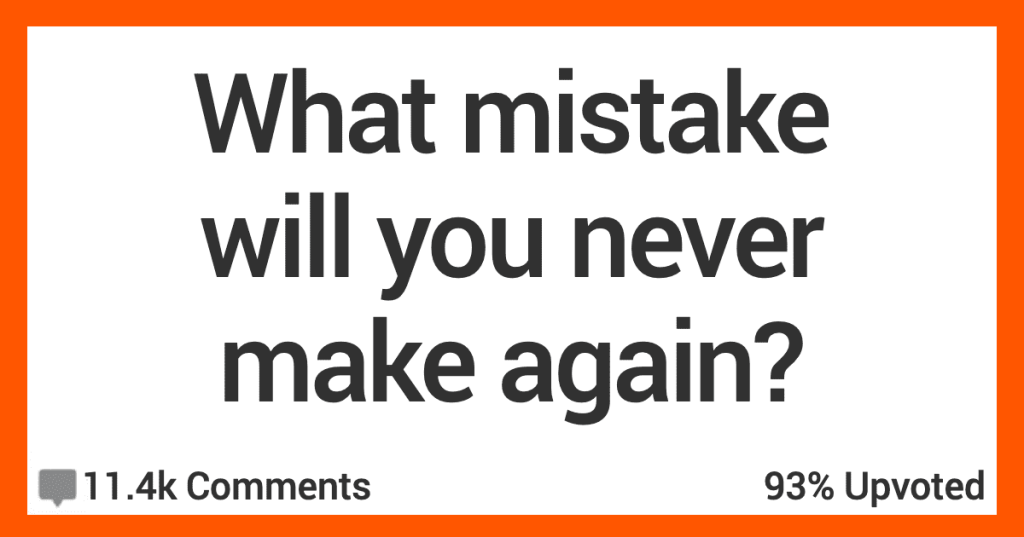 Well, I won’t ever do that again…

How many times have you said that in your life?

Be honest with us…

And today we’re gonna hear from people on AskReddit about the things they tried once that they’ll never do again.

“I had a root canal.

I now brush and floss like it’s my last day.”

“Taking a job offer where the manager was a little too eager to hire.

It was not because I was that awesome.”

“Eating couscous before the water had fully soaked in.

Turns out it continues to expand in the stomach.”

“Took an antibiotic that needed a meal prior on taking said antibiotic. But it was the middle of the night and decided to wing it.

That horrible feeling afterwards was etched into my brain and decided to never do it again.”

“After donating blood, they say not to do strenuous exercise for a couple hours.

Well I thought I’d stop by the grocery store on the way home from the blood bank. A nice old lady asked me to help her with a big bag of dog food. I thought “there’s no way that would be considered strenuous”.

Then I woke up on the floor with a small crowd standing around me and someone calling for an ambulance. I was fine, but it was a bit embarrassing.”

“My SO worked in kitchens for over a decade.

She always says, “A falling knife is like a cheating wife. Don’t try to stop it. Just let it go.””

“Sharing something personal with anyone who doesn’t deserve to know.

My sister is the absolute devil when it comes to sharing and being vulnerable.

My partner on the other hand is a saint.”

“Remain in a relationship after being cheated on.

Boy was that foolish of me.”

“Being lazy about getting an oil change.

“Getting into debt while things are looking good. Just avoid the temptation, it’s not worth it.

Currently paying off a car i’ve not even had in my possession for quite a while.”

“Never put your face over a toddler’s head. Sounds dodgy, but it’s innocent.

Toddlers jump spontaneously. If your face is within 1 foot of the top of their head you’ll get a bloody nose/lip.

Happened to me too often with our kid/friend’s kids.

Was nearly on the brink of destroying my life but found a way out of it.

It was a mob scene, with people challenging each other to be first to grab merchandise off the shelves.

Never again – not worth it.”

If so, share them with us in the comments.