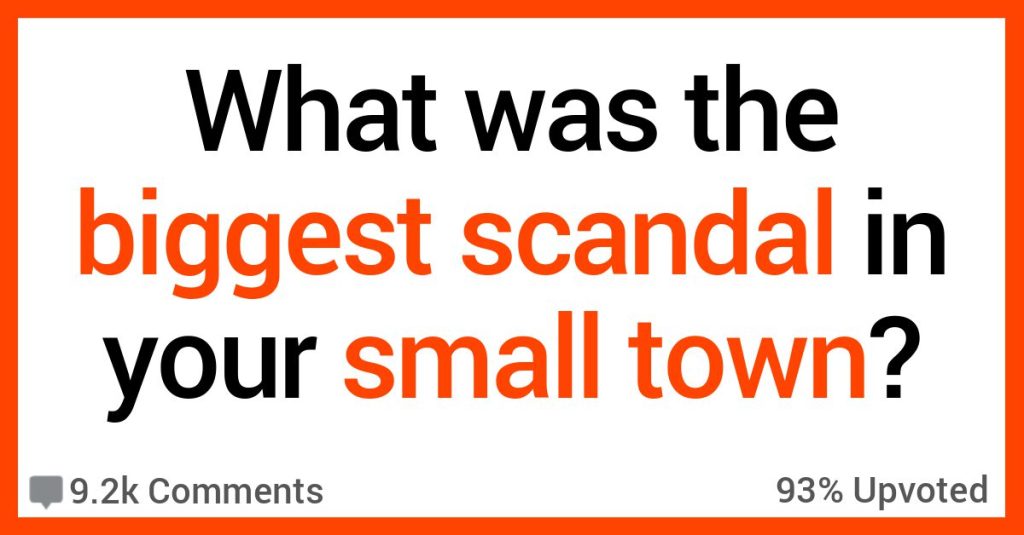 13 People Open Up About the Scandals From Their Small Towns

You never know what’s just below the surface in small towns.

Deep, dark secrets that some people will do anything to protect.

And when something major happens, everyone knows about it almost immediately.

Hey, it’s how those places work.

AskReddit users shared the scandals that rocked their small towns.

“My favorite Chinese restaurant burned down when I was in high school.

Told the fire department nobody was left in the building. Turns out they had multiple people chained up in the basement as part of a fairly large human trafficking operation.

2. The wealthy side of town.

“We don’t live in a super small town, but small enough at 50k. There was a m**der that happened about 20 years ago that has left everyone scandalized.

It was a woman who lived on the wealthy side of town. Her husband was an engineer who worked in a neighboring town about 45 minutes away. He came home to find his wife had been brutally slaughtered. He called the cops, etc.

The man who gets arrested is this no name drug addict idiot whose only connection to this family is that he installed the security system. No one could ever figure out a motive, however. He had 3 trials, all hung juries. So he got off eventually, but the elapsed time was several years. Poor guy.

Meanwhile the husband moves several states away and says that he is terrified of this dumb punk kid, which is really dumb. No one around town believes that the punk did it. So here’s the juicy back story that never made it in the official story.

The reason the attorney did that was to hide the fact that it was actually his wife who most likely committed the m**der. The m**der victim and the attorney were apparently having a private affair separate from the swinging. The attorney’s wife found out and lost it and k**led the woman.”

“Goth kid in high school k**led his neighbor with a piece of crown molding because she was going to discover marijuana growing supplies he was mailing to her house.

He then carved a demonic symbol in her back and had a glass of water and shower in her house.

He’s been living in a beautiful waterfront property since then called San Quentin.”

“Our library has been shut down because one of the librarians was filming library themed p**n there and using the computers there to upload it.

She was caught because she was also emailing to people and accidentally emailed to someone else that worked there.”

High school biology teacher was sleeping with students for years. Wasn’t that attractive, but was charming, was the varsity football coach, and conveniently lived in town very near the school.

His wife was also a teacher at the middle school. She was easily a 12/10 on an attractive scale and was known for her sense of humor and super model looks. Apparently knew all about it but turned the other cheek.

Made it all the way to assistant principal before he was caught, sent to prison for a very long time, she was sentenced to some form of intentional juvenile endangerment, no idea what ever happened to her.”

“One of the real aggressive dude bros m**dered a kid at a party in front of people and got away with it.

The victim was a kid from a neighboring town and I think the initial conflict may have been over the victim being too friendly with a girl. Anyway dude bro savagely beat him, beginning at the top of a stairway.

Kid fell down the stairs and was already out of commission. But dude bro followed him down and repeatedly kicked him in the head until he bled from his eye sockets.

Well anyway this is a small town and dude bro m**derer came from one of the few “big name” families in the area. Well connected with local authorities. He sat in county a bit but pled no contest and got such a sweetheart deal he did little to no prison time. Good old boy politics is some real s**t.”

“My grandpa got AIDS from a blood transfusion in 1985. This was in the rural Midwest.

Since AIDS at that time was a gay man’s disease that he must have been gay.

He was a county commissioner and held positions of leadership in the church. So it was a pretty big deal.”

“A Wyoming DCI undercover officer was placed in the high school to bust what they considered a drug ring.

He was like 23 or 24 years old but looked really young. He told an elaborate story about how he was from San Diego and his parents are ok with him living there by himself. He had a studio apartment that was completely wired with video and audio. The kids he made friends with and were supposedly a part of this drug ring would come over and drink, smoke pot, and occasionally drop acid.

The kids would talk s**t about how they were going to get sheets of acid from a dealer in Denver and distribute it across town. Well, that was enough to have the agents bust down the door of the apartment one night and arrest everyone there. All minors. Everyone got charged with possession with intent to distribute even though the only drug there was pot.

Fast forward a couple of months later and it comes out that the undercover agent was having s** with a 14 year old girl that was one of the kids that got busted. This resulted in the whole case being dropped and all the kids were exonerated. The agent was convicted of statutory r**e and spent some time in prison.

The whole case was the definition of entrapment anyway, and I believe even without the statutory r**e that no one would have been convicted. The town had a population of 1k at the time so obviously it was the talk of the town.”

“Not even a town, just a small village.

Middle of the day and a bloke turns up to a house that is on the edge of the village park, shoots the occupier through the bedroom window. Had mates who were in the park at the time. Turns out it was drug related.

Also the local barmaid stabbed her husband during an argument, turned round with a knife in her hand as he approached, he then fell backwards through the glass patio doors, was accidental and she was found not guilty. She was a lovely lady in her 60s.”

“Their is a rumor our local millionaire m**dered a truck driving business owners and buried her in the cement of one of his mansions.

They never found her body but three months later for some reason he k**led himself. Police didn’t investigate but the news said they received a letter to check into his connection.”

There was a bit of an incident in my small town where 2 high school seniors “pranked” a mentally disabled student by asking him to participate in the ice bucket challenge, but instead dumped a bucket full of tobacco spit / human waste / etc onto him.

Needless to say there was some outrage and the two seniors were eventually arrested.”

“Grew up in N. Attleboro Massachusetts and grew up Catholic.

At my church, St Mary’s the was a priest named Father James Porter. He ends up going to jail for a very long time, admitted to abusing over a hundred kids, and was convicted of molesting 28. It was national news and a very big story broken by the Boston Globe in the 1990s.

I was fortunate as he was an old man when I was an altar boy and never was touched. If I remember correctly this was one of the first cases where the Vatican paid out a hefty sum to the victims. Pretty big news for small sleepy town!”

“I come from a sleepy little village in England, and someone once broke into the local pub and stole cartons of cigarettes, but otherwise left the place undamaged, no money taken or anything.

Tell us about the scandals that rocked your small town.