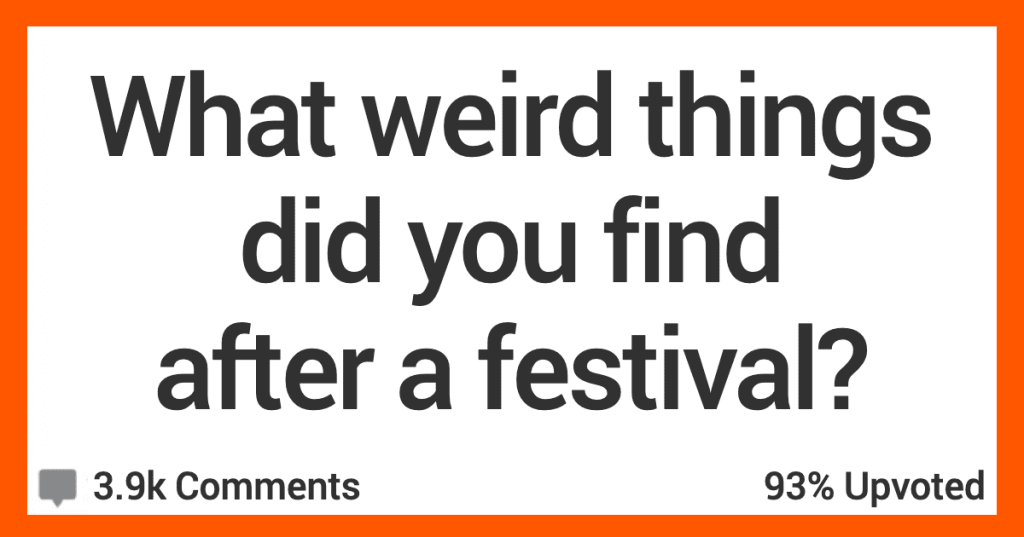 I went to the Warped Tour several times in my younger days, but it’s been years since I went to a music festival…

But I’ve heard a whole lot of weirdness and debauchery goes on at them!

And today we’re going to hear from folks about the strange things they found after a festival ended.

Check out what they had to say!

We found some ma**juana, quite a lot of money(something like $100 and the first year we swiped some rather expensive lightweight tents that were left behind, which we cleaned and used for years afterwards.

A few nice sleeping packs, too.”

“A gazillion cheap sunglasses and for some reason straw hats were a huge thing at the time as well.”

“Back in the ’90s there was a Rock Fest that was nicknamed Mud Fest due to the heavy rains turning the entire area into a mud pit.

Someone asked about lost and found, and the radio station said that for the first time in Rock Fest history there was nothing in the lost and found, because anything left behind was under a food to mud by closing time.”

“Some of the weirdest stuff we have found were panties and broken condoms (usually due to filling air in it).”

Found too many pairs of panties, lots of flip flops (eww), many pairs of sunglasses (including some sweet aviators), lots of cannabis (legal in Canada) and almost as much cocaine. Condoms both in and out of packages.

Probably most disturbing was a single baby shoe. Post festival cleanups are always very much a “lose faith in humanity” sort of experience.”

“A whole raw chicken, and a baseball cap full of soiled feminine napkins.

“A baby bird. It was a robin in a cowboy hat.

Took it to my dad who hand fed it and raised it till it was big enough to release into the wild.”

Not me, but a friend of a friend found them in their tent.”

Loads upon loads of drugs. It was turned in to the police. Mostly.

Expensive tents that easily went for $300 once cleaned.

Lots of phones, wallets and some lose cash.

A cat (?!), it did have a microchip and was returned to the owner.

Two tortoises. Adopted by a volunteer who already had a bunch of them at home.

High grade chemical gloves were a must.”

I used to give massive raves and I always stayed for the clean up after.

“A loaded handg**. How the hell do you forget that?

And the usual, sunglasses, underwear, trash.”

“A friend found a ounce of coke, best of all it belonged to a group of people who were being d**ks!

This was festival day one.

“Two camping chairs, one that I still use regularly from in the park.

Some money and randomly an unopened bottle of Jura Whisky.

Sunglasses, so many tents and sleeping bags left abandoned though.”