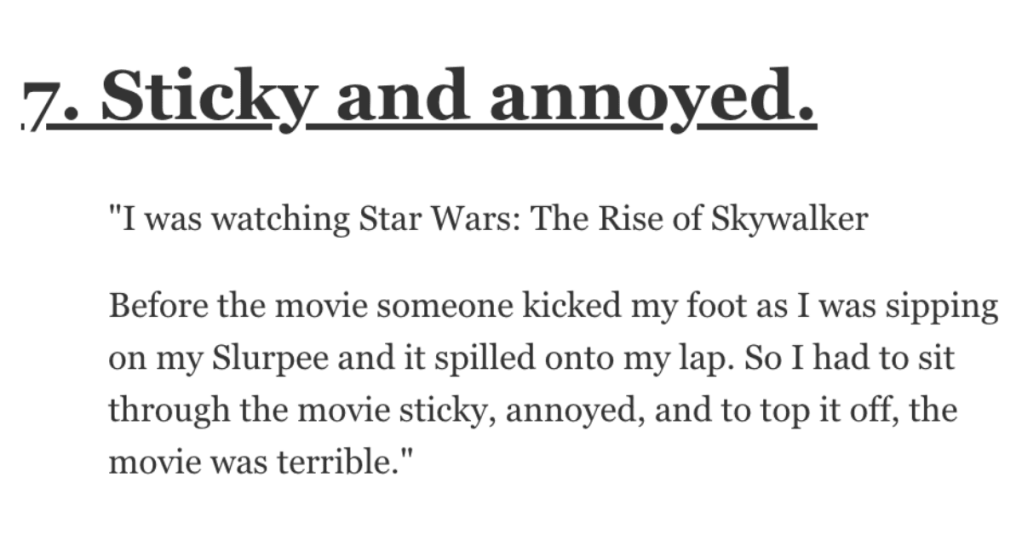 I think it was around 2003 and I went to see 28 Days Later with a few friends. A group of young people, probably in their late teens, sat in the row in front of us and were pretty loud.

Oh, and they also mentioned that they had just done acid before they came to the theater!

Well, they wouldn’t stop talking during the previews and then, a few minutes into the movie, one of them threw up all over the floor and they all got up and walked out of the theater.

AskReddit users went on the record and shared their worst movie theater experiences. Let’s see what they had to say.

“The movie I saw wasn’t really bad. But the people made it crappy. I hated Zootopia for literally the next 2 months.

So I was sitting and trying to watch Judy say, “Blood, blood, and…death!” But this idiot brat was behind me using my chair as a punching bag! So the whole movie I was being jolted back and forth. And you know movie chairs. They, like, snap you in half if you’re kicked.

Then, the mom (she’s a Karen). Saw her yelling at concession people because they gave her daughter less popcorn than the person in front of them. The person had ordered the jumbo, she ordered the large.) got out some candy.

“No! I want those M&Ms, not these ones! These are crumpled!” (I’m not making this up)

Finally she stops whining and get her M&Ms. And these people are the loudest candy eaters of all time. They suck. Its so loud how the crumple the packet and THROW IT ONTO OUR SEATS!!!

Then they get out some Subway (How did you get Subway into the movie theater?) and for 10 minutes everything is quiet. Then the mom gets a call from her friend, the dad legit starts streaming football, the kid starts kicking my chair and the girls goes on about how if she went to Zootopia she’d be a princess.”

“I ran into the kid that keeps bullying me at school and every time my parents looked away he would THROW HANDFULS OF POPCORN AT ME.

Finally my parents caught him and he and his parents were told to control their child or leave. Complete silence and I got to enjoy Mulan in peace.”

“I was watching the My Little Pony movie with my little sister and a few of her friends. We watched the whole movie with no problems. Until we had to get up and leave.

My sister and her friends wanted to dance to the music in the credits and I needed the use the bathroom. My mom told me to meet her in front of the theater. But when I got up, I slipped. In a puddle of pee! And I starfish style fell too.

It was in my hair on my clothes and in my mouth. So yeah that was nice.”

“When I was about 5, I went to see Frozen for the bajillionth time.

As we walked in, the theater was packed. No biggie, it was Frozen after all. Halfway through the movie, right during Let it Go, I heard a loud moan. I thought somebody was like singing it horribly because everybody loved Let it Go and Frozen to my 5 year old mind.

But it was a woman and her husband getting it on down on the floor, right next to the wheelchair section. I whispered to my parents, asking them what the heck those people were doing naked. My mom stormed off to give them a piece of her mind while my dad went to talk to the usher. Just imagine. Two people having s*x in a theater full of little kids.

It still makes me gag, and I refuse to sit anywhere near the isle or the wheelchair section, or really anywhere with a flat area, to this day in a movie theater.”

5. Why would someone do this?

“Only ones in the theater.

A group comes in, sit in the seats directly behind us, then talks and eats loudly non-stop.”

“I was watching Star Wars: The Rise of Skywalker

Before the movie someone kicked my foot as I was sipping on my Slurpee and it spilled onto my lap.

So I had to sit through the movie sticky, annoyed, and to top it off, the movie was terrible.”

“When I was about 7 years old, my mother took me and my older brother to see Disney’s “The Hunchback of Notre Dame.” I had already seen the movie on a field trip at summer camp.

Now, back then, when movie trailers were shown in theaters, they would show specific ones that were associated with the film company of the movie. I already knew something was wrong when a trailer for “Beavis and Butt-Head Do America” came on instead of “Jack.” Then, instead of “The Hunchback of Notre Dame” “Tales from the Crypt Presents Bordello of Blood” came on instead. “Mommy, they put on the wrong movie!” I whispered.

Mom assured me it was just a preview. It wasn’t . I was crying and getting grossed out because a man was holding out a heart. Thankfully, at this point, we were ushered out of the theater room and taken to the Bordello of Blood’s room instead.

Apparently, they would show “Bordello of Blood” in the “Hunchback” room late at night and somebody forgot to take the film out that morning.

After that experience, I became rather wary of whether the right movie would be shown whenever I went to that theater with my parents.”

It got to the part where that big statue comes alive and chases Hercules and his friend and I dragged my little sister up the aisle saying in a LOUD voice how she was frightened and couldn’t take it and I had to take her home.

She was LOUDLY complaining because she was enjoying the film. I didn’t see the whole film till about forty years later but that bit still freaks me out.

The whole memory is so embarrassing! I’ve always been a wimp…”

“This will totally date me… My friends and I had the whole theater to ourselves for “The Secret of My Success.” We were in high school, giggly, crushing on Michael J Fox. Suddenly our row of seats started shaking. Hard.

There was no one else there! So, being goofy high school girls, we convinced ourselves the theater was haunted. We thrououghly freaked ourselves out. Made a ton of noise. Probably pissed the theater crew off. Turns out it was an earthquake.

In INDIANA! (Not an earthquake hot spot for those who don’t know). Not a terrible experience. Just the most interesting one for me!”

“Was at an IMAX film, some guy a few rows in front started having a heart attack.

Film stopped, lights came on, the cliche “is anybody a doctor” was called out.

Got our money back, so obviously it was worse for the guy than for me.”

1) Was, I guess, a MCU-movie, so, loud, fast and full of action set pieces. The movie didn’t even started yet as we’ve heard a crying young child… or shall I say toddler… maybe 2 or 3 y.o. Fortunately (more for the kid then us) they’ve left the theater early when movie just started.

2) Guy next to me texting all the time. Me patiently waiting to say anything until start of the movie… he, of course, did not care at all and continued hitting his brain drenching device. As I’ve asked him firm but polite to stop he looked pissed but quit his habit for the next 2 hours

3) Couple behind us talking over the whole movie… she explains what just had happened on screen. Every effin scene! Turned around to ask to be silent (as she was having a high pitched, loud voice) for the rest of the movie… guess what who didn’t care about it for a second. Tried it, getting annoyed a bit more each time, several times but she kept going. 20 minutes later she got booed out by the rest of attendees!

Bonus: not to mention the people who get calls, answering them and don’t giving a sh*t about the rest of us who want to enjoy the movie, not their private business.”

“I was with my best friend watching a random movie and a rat crawled into her blouse. It was terrifying for her and she stripped right there.

Thankfully it was dark and I had a spare jacket to give her. We couldn’t finish the movie because she was hysterical and creeped out so we left immediately.”

What’s the worst experience you’ve ever had in a movie theater?

Tell us what happened in the comments!