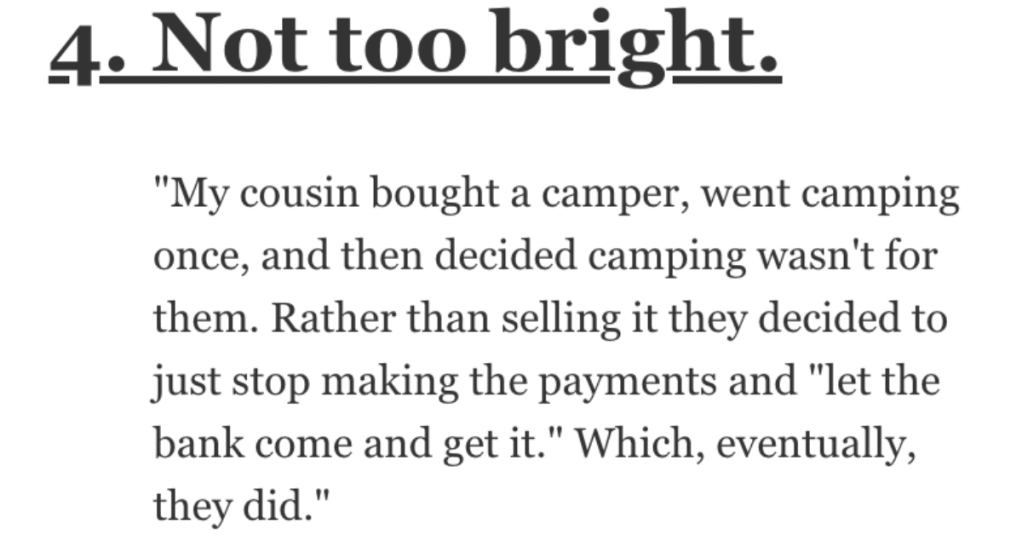 13 People Share the Worst Financial Advice Someone Ever Gave Them

It’s a crying shame when people make bad decisions with their money and they blow it all or take a hit so big that it changes their lives in a major way.

But it seems like it happens all the time, doesn’t it?

Check out these stories about bad financial advice that none of us should follow.

Folks on AskReddit talked about the worst financial advice they’ve ever received.

“My father would tell me to max my credit card on a new car and if they asked for payments just say “F**k em, what are they going to do?”

My father is several levels of debt hell deep that he’s trying to get out of now, but he’s at least trying.”

Keep renting, no one will ever pay $35,000 for a 2 bedroom house and garage with a sweeping view of the East Bay.

I went back to vist the old neighborhood a few years ago, those $35,000 stucco homes up many flights of steps perched on the top of Potrero Hill were now all gentrified, remodeled, gated, and asking $1M+ and that was 5 years ago.”

“About 5 years ago, I had a friend who was trying to convince me to study through a private college because they “gave her a free ipad”.

She never finished the course, but kept the iPad (you only got to keep it once you pay your fees and graduate. Mind you, the price of the course included the iPad so it wasn’t free).

So last year, four years later, I get a call from the college asking for her contact info. She put me down as a reference and they were chasing her down because she still owed her fees and wasn’t entitled to keep the iPad.”

“My cousin bought a camper, went camping once, and then decided camping wasn’t for them.

Rather than selling it they decided to just stop making the payments and “let the bank come and get it.”

Which, eventually, they did.”

“Don’t take a raise if it puts you into the next tax bracket.

And pay the minimum on your credit card to establish good credit.”

I did not take that advice.”

“Guy I haven’t seen in three years or so wanted to talk me into starting a business with him, because he just got into college for a bachelors degree in business.

Yeah sure, let me get my cheque book out in this badly illuminated garage while we’re both dr**k. Guy also got into MLM and weird self-optimisation preachers.”

“Get a bigger mortgage, you can deduct more from your taxes!

Yeah dumba**, and I’ll be spending double that amount in interest so why should I?”

“Just ignore the collection call and eventually they will leave you alone….

I had a parking ticket I didn’t know about that ended up on my credit and the guy I mentioned it to gave me that bit of wisdom.”

“First year outta college, working for a financial advisor, and he tried to convince me to put 5% down and buy an apartment in Chicago.

“”Don’t go to community college, you’ll never get a job. Instead apply at X and X colleges.”

My grandmother, aunt, uncle, and cousin all told me this, and I really considered their advice because my parents really didn’t give a s**t what I did.

Since I didn’t get any scholarships from high school, I decided at least if I went to CC and didn’t get a job I wouldn’t have student debt and I could just do something else.

I went to CC for two years totally free on FAFSA grants (it was 800$ a semester LOL) and did so well I transferred to a university with a (almost) full ride.

I am now a semester away from graduation with a job lined up and all of 4k of student debt which is likely to be forgiven anyway.”

“Incite me to go to a real expensive restaurant where you can spend easily $250 without drinks at a time I only had $700 in bank account and had not paid for my car, groceries and stuff .

Because “Come on we only live once”.”

“My ex (in his mid twenties and lived at home with no expenses) went out of the country for two weeks with a budget of $2700.

I tried to explain that this is not a great way to budget for a trip, and his response was “credit cards are meant to be used. As long as you pay the minimum payment, you’re good. What do you know about credit cards? You never use it? Start using yours more before you talk to me about money”.”

Have you received any bad financial advice?

If so, please tell us about it in the comments. Thanks!