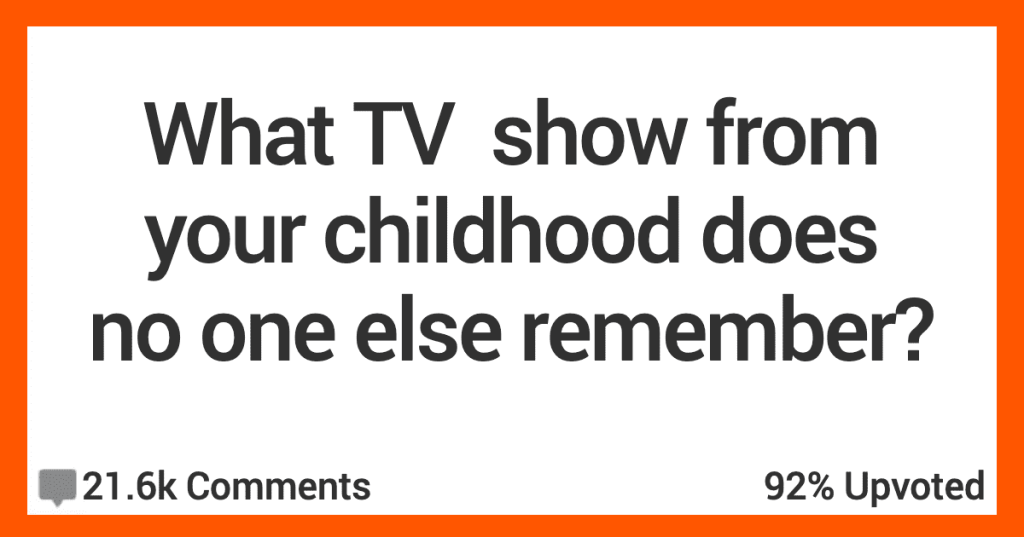 But these folks on AskReddit sure do so they’re picking up the slack for me!

Enjoy these responses and see if you remember any of these programs!

“What Would You Do?

I also remember watching an animated show in the early to mid 2000s called Click and Clack on PBS about two guys that own a garage. I think it was based on some radio show hosted by the two main characters and they for some reason decided to make an animated show about it.

I watched a few episodes and actually enjoyed it but it completely disappeared from my psyche after that.

Before Mister Rogers and Sesame Street.”

“I have never met anyone who remembers SWAT Kats.

We loved this show as kids! Wasn’t on for very long though.”

“This is going to show my age but Thudarr the Barbarian.

Also there was another Voltron but with different groups of vehicles that came together to form Voltron.”

I know it has a cult following but it should have been a global smash.

Way ahead of its time.”

Mid-1980s, incredibly poor production values, starring a young and surprisingly edgy-looking Courtney Cox and a bunch of other people.

It was about a bunch of teen troublemakers who mysteriously ended up with weird powers and the chaos they caused.”

No one else watched it, but it was a HUGE part of my childhood.”

They had blue suits on and….well they crash tested stuff. It was a cartoon.

Enough people have looked at me like I’m crazy that Im starting to think iit was some kind of fever dream.”

“The show “Get a Life” starring Chris Elliott and Brian Doyle Murray on Fox in the early 90s.

Chris Elliott plays an adult paperboy who has some madcap adventures. To be honest, the show wasn’t that great but one episode always sticks out in my mind where a space alien lands and Chris befriends it and names it “spewey” because it shoots liquid all over the place.

In the end of the episode Chris and Brian Doyle Murray end up eating the alien. It’s pretty weird.”

“There was a show called Manimal about a guy that could transform into a variety of animals to fight crime.”

12. Having trouble with this one…

“My friends seem to have trouble remembering ReBoot and Exo Squad. I think they even tried to do a reboot of ReBoot, didn’t check it out since I want my memories of the show to be positive.

As for Exo Squad I even remember having an interactive CD-Rom where you could watch clips from the show and build your own exo mech.”

The animation is cheap and there’s animation errors everywhere, but it still was enjoyable to watch as a kid.”