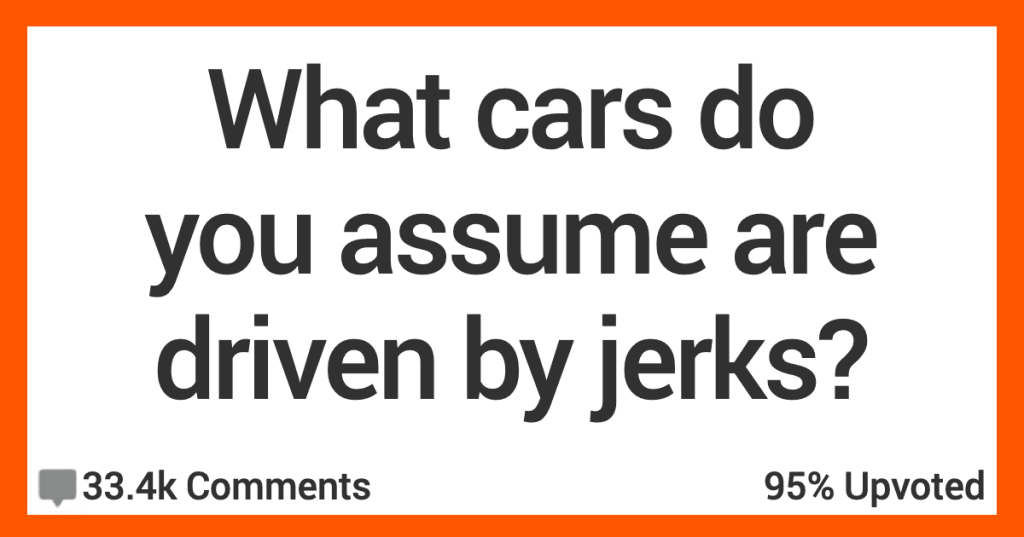 What Car Do You Automatically Think Is Being Driven by a Total Jerk? People Responded.

What do you think of people who drive Hummers?

I’m not talking about folks who drive them in the military but just on regular streets around town?

Yeah…it seems a little bit ridiculous to me…

What car do you see and automatically think is being driven by a jerk?

Let’s see how AskReddit users responded to this question.

“Here (Barcelona) silver Mercedes are preferred by total sh**bags, the wastes of perfectly good air who feel they’re a cut above everyone else.

Windowless small white delivery vans are the most aggressive drivers.”

“F250 with a lifted front end and a lowered rear end with tire wider than their radius.

“Dodge Chargers with blacked out rear lights and logo or Dodge/Ford pickups that’s way too lifted.

Funny enough I have friends who drive these cars and they are good people and very rarely in situations where they act like dbags but we strangers on the road driving these always seem to be the ones acting a fool.”

We call them Inverted Porcupines because all the p**cks are on the inside.”

You’d think they’d be better at driving because they do it all day, everyday, but somehow they never use blinkers, floor it to get to the stop sign, etc.”

“Any Lexus SUV. Any Tesla (took over from the Prius a while back.).

Anyone with a Monster logo, Salt Life, F**k It stick figure, or Baby on Board sticker.

That is a boss who doesn’t work on site. No dings, no scratches, no dents.

You know he’s showing up in a clean hard hat too.”

“In LA. Range Rovers and BMW’s are the worst.

Zero signals. Way too fast everywhere even though we’ll all end up at the red light. Those Tesla 3’s are giving them a run for their a**hole status lately though.

“In Georgia there’s a LM tag type, which I assume stands for limousine. They’re always on the huge black SUV’s like Escalades.

Those guys do not give a f**k. About to miss an exit because they were texting in the left lane at 45 MPH? F**k it, cross over 4 lanes to exit.”

Drivers of old Jeeps are largely okay, but it always seems like the drivers of new Jeeps are arrogant as f**k.

I guess they think they’re better than the rest of us because they can drop $40K on a new car that they’ll never fully utilize.”

“Dodge Rams always seem to be driven by aggressive a**holes.

“Mercedes drivers are the absolute WORST.

It seems like every time they are always the culprit whenever a car is cutting someone off, following too close, or driving 10km under the speed limit when you can’t pass.

Usually silver, but any Mercedes model in any color.”

Let us know what you think about this in the comments.