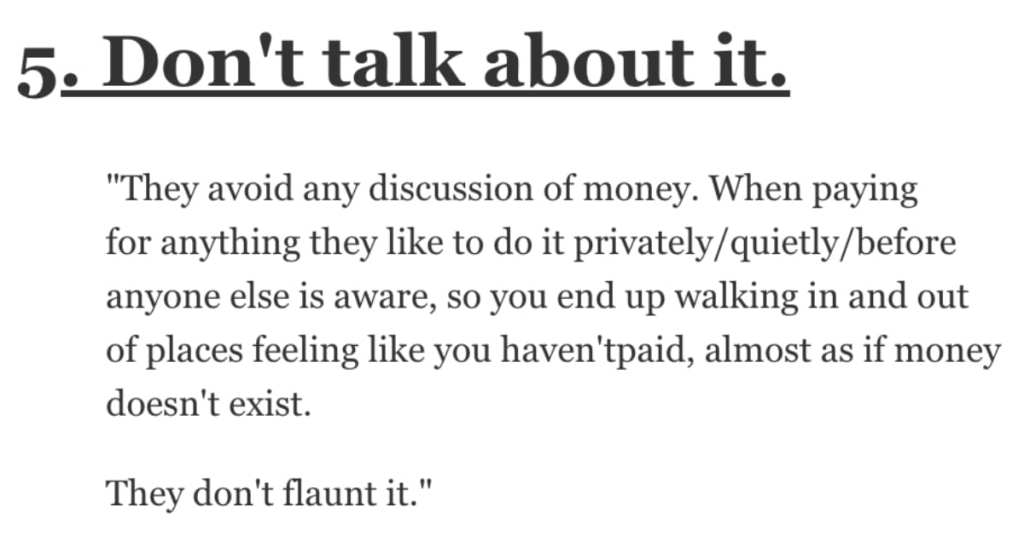 It’s like when you read an article about a woman who lived in a run-down shack with 75 cats and no running water and you later find out she was worth $10 million. Weird, right?

What screams “I’m way richer than I look?”

I worked in a high-end whisky store for many years, and the number of shabbily-dressed men from overseas who strode in to spend $5,000 – $10,000 on whisky for their collection was staggering. They were always chatty, knowledgeable, and above all casual.

One man in particular had been collecting for decades, his wife was fully supportive (she had her own collection of rare items, he implied), and he enjoyed traveling the world to pick them up as an excuse to go someplace. Conversations often went like this:

Customer: “I see from your website you have the [rare bottling from 1967]? Do you have any in stock now?”

Customer: “Oh, great. I think that fills a couple of gaps in my collection. And if not the guys and my wife will enjoy cracking one open. Can you package them up for me please?”

Me: “Would…would you like to know how much they are, sir?”

Customer: “Can you ship them all to my place? In fact, if you have discounts for bulk items, I’d like to know what other vintages you have.”

“I went to dinner with a GF and her parents. After we ate, the owner came out and asked how the meal was and then we left without a bill ever coming to the table.

On the way home I asked GF about it and she said her dad had “tabs” at all the restaurants he liked to eat at.

As we were leaving the valet brought the cars around and I mentioned I liked his Tahoe. I asked what year it was and he kind laughed and said whatever is the newest one.

I didn’t know he owned a car dealership in another city.”

“I work at a luxury resort.

People call to book rooms with me all day and they aren’t cheap. I can tell when it’s obvious a young couple who had to scrape together the dough for the cheapest room.

But every once in a while I’ll get a call from someone who casually calls and asks to book the biggest room without asking for the price. They know exactly what they want and the price means nothing to them.

“I had reason to frequent a small but popular marina at a certain Gulf Coast city.

I encountered one old man often, enough we greeted each other with random chit chat. Lovely gentleman. He wore a crumpled old hat, a grease spotted tee shirt, cut off jeans, and worn deck shoes. He always puttered around the largest yacht in the marina, about 60′ long.

He would polish the chrome, wash the deck, clean the life preservers. I didn’t assume he was the maintenance guy because he had such self confidence. I never saw him actually take it out.

I got up the nerve to ask security who he was; he owned most the commercial real estate in the city.”

“They avoid any discussion of money.

When paying for anything they like to do it privately/quietly/before anyone else is aware, so you end up walking in and out of places feeling like you haven’tpaid, almost as if money doesn’t exist.

They don’t flaunt it.

Source: I was dating a girl and didn’t realize she and her whole family were rich until her dad picked us up for dinner in a brand new Mercedes, proceeded to pay for everything during our trip, and our Christmas presents were first class flights to the US (from Australia) for a ski holiday…

That’s around AUD$10-15k (US$7-11k) per person. He also financially supports his other daughter at Cornell University/living in the US.

I grew up poor (and still am, lol)… But I never realized how poor until I met that family.”

“Oh God. I dated a rich girl in high school but didn’t realize it until it was time to meet her dad.

She had me meet them at a restaurant that there was absolutely no way I could have afforded the tip, let alone my meal. It was awkward (for me, at least) assuming I wasn’t going to pay anything when the check came.”

“One of my good friends made a bunch of money in oil and then invested it in tech companies that ended up doing extremely well.

2 years out of college he was a multimillionaire. He’d still go out to drink with us like normal and would pick up the tab for dinner and drinks for a group of 8 to 12 of us without a second thought.

He didn’t flaunt it or anything, just wanted his friends to have a good time without worrying about money while he was around.”

“The type that nonchalantly offers you a spot in their luxury box at a game or concert, or covers your course fees at a golf outing even though you barely know them.”

“Wearing a T-shirt and jeans in a room of people wearing suits.

My company CEO does this all the time.”

“Back in high school I used to do rowing, and at the rowing club there was this guy who wasn’t great at socialising, was a little awkward, but he was friendly so I didn’t mind him.

We often went out on the same boats and would talk to each other (as much as was possible while rowing), and at the end his dad would always pick him up afterwards wearing sweatpants, slippers and a hoodie.

You might understand why, then, I didn’t believe my friend when he told me that they were one of the richest families in the world. I looked them up, and sure enough, there they were, worth an estimated 15.5 BILLION DOLLARS.

Now whenever I see someone out in public looking like they’re wearing what they slept in I always assume they’re mega rich and don’t car about a thing anymore.”

Either they’re getting the super deluxe version and don’t know the standard price or they haven’t done their own food shopping for years.

To clarify, it’s not about knowing the exact price of a product (most don’t), but having no real conception of even a ball park figure.

Being used to buying vastly more expensive things, they guess what they believe to be “cheap”, yes, like Bill Gates’ appearance on Ellen.”

“Really rich people don’t wear clothes with a big brand on display because they don’t make free publicity for anyone.

For clothes they have specific shops who could tailor them high quality clothes, purses or shoes anytime.”

What makes you think someone is way richer than they look when you see them?