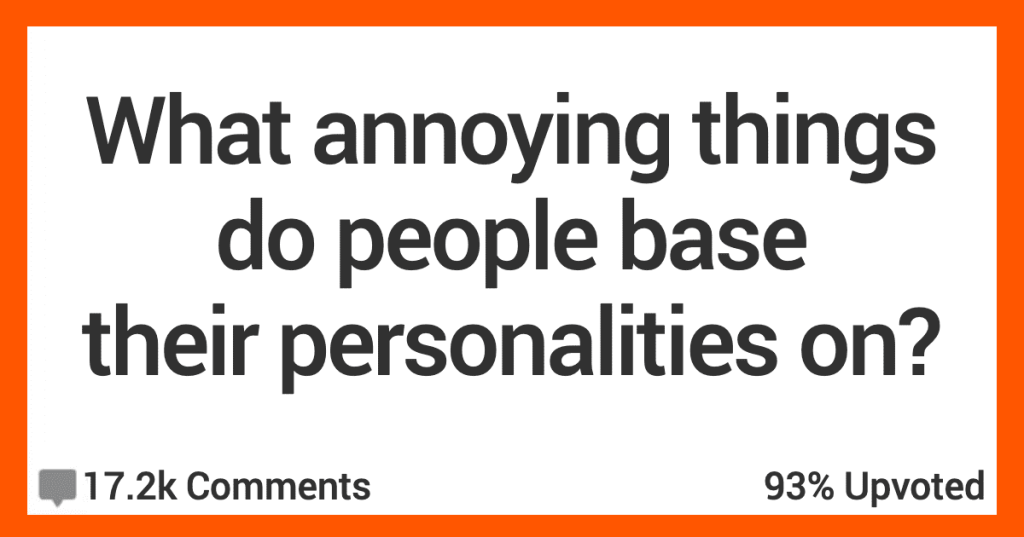 There are quite a few things that people out there revolve their whole personalities around that I find annoying.

I’m sure they are nice people, but I just don’t understand how that can be the WHOLE thing that defines you.

A few examples include craft beer, Phish, and especially BEARDS. That one is really weird to me…

But enough about me…

Here’s what AskReddit users had to say about this…

But I want the world you know I paid $500 for a cooler. And an additional $10 for the bumper sticker. My choice of coolers is my life!”

“People that take pride in being a “b**ch” or “a**hole” purposely because they think it makes them tough.”

“Idolizing and obsessing over any celebrity. One of my best friends is OBSESSED with Taylor Swift, like it’s all she talks about.

She’ll interrupt conversations that have nothing to do with pop culture to talk about her.

I told her I didn’t really like her music that much and she reacted as if I called her the Antichrist or some s**t.”

They don’t realize ultimately they’ll have to retire and reintegrate with and navigate the civilian world, where your rank and position means nothing and you need people skills to collaborate on projects as well as in social settings.”

It’s heartbreaking how many people, all young women my age, that got roped into MLM I’ve seen that I’ve then watched slowly degenerate into gaslighters and manipulators.

It sucks because they were truly pleasant people beforehand.”

“Bro you’re missing out. Diamond hands apes together strong,” said Brent as pulls the newspaper over his body and prepares for sleep behind a Dairy Queen.”

There are some OBSESSIVE fans that get way too into it and want to become Korean themselves.

“Being a social media “influencer”.

They are 100% the most obnoxious people on the entire planet.”

Forever talking about how much they had to drink on the weekend. How much al**hol they can handle. How many times they’ve gotten smashed this week. Like it’s something to be proud of.

I love a drink at times too, don’t get me wrong, but if you’re using the fact that you drink all the time as a way to seem superior to others then you, my friend, have a problem.”

My cousin is 36 and drags her kids to Disneyland every weekend. Then she b**ches that she’s always broke. Oh and she makes everyone wear nightmare before Christmas clothes on a daily basis. Even her husband.

Her whole bedroom is decorated with the Nightmare Before Christmas down to her sheets. I say her bedroom because she has her family of 4 still living with her parents. They are rich and she doesn’t have to pay for anything other than her Disney trips.”

“Honestly if someone can base their entire personality on just one thing, no matter what it is, that’s pretty annoying in and of itself.

Be broad…have several different interests without diving head first into just one. Learn a little about a lot and then learn a lot about what you love, but don’t base your entire life on just that one thing because you’re just making it more difficult for you to find people with a common interest.”