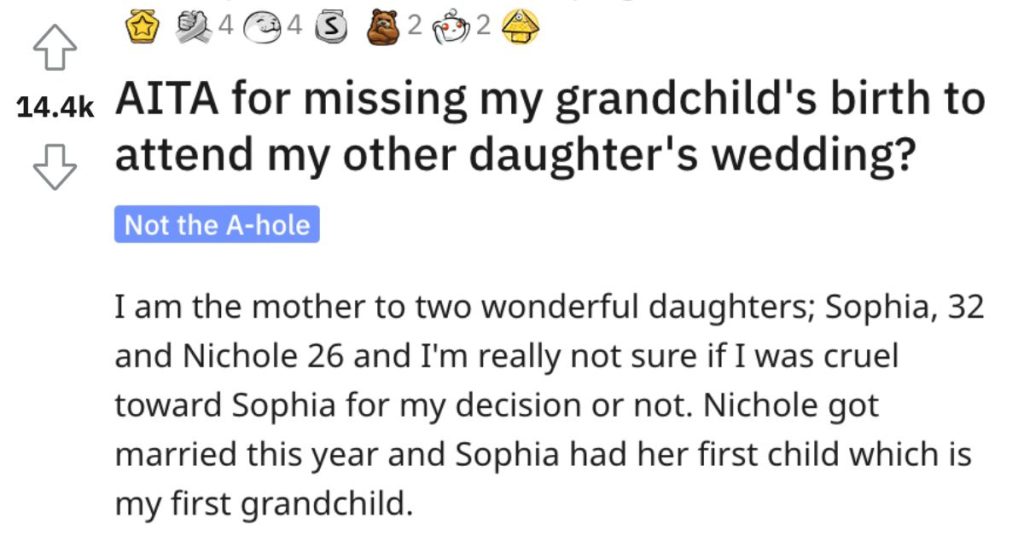 Is She Wrong for Missing Her Grandchild’s Birth to Go to Her Other Daughter’s Wedding? People Responded.

That’s what this woman is dealing with in this story from Reddit’s “Am I the A**hole?” page.

So is she a jerk for the decision she made?

Read on to see what you think.

AITA for missing my grandchild’s birth to attend my other daughter’s wedding?

“I am the mother to two wonderful daughters; Sophia, 32 and Nichole 26 and I’m really not sure if I was cruel toward Sophia for my decision or not. Nichole got married this year and Sophia had her first child which is my first grandchild.

I’ve had a good relationship with both my daughters and I’ve always tried to make sure neither of them felt like I favored the other but I admit there were some rough patches with Sophia. When Nichole got engaged she asked if I would walk her down the aisle since her father has never been in her life. I asked her what about her uncles or brother and she said no, she wanted me.

I was more than happy to agree and helped her plan her wedding. My daughter Sophia announced her pregnancy around the beginning of the year. The timing panned out that she would be due after Nichole’s wedding so she asked if I would be in the delivery room with her and stay with her and her husband for a few weeks after the baby was born to help out.

I was very excited too, and since we already live in the same town and see each other almost daily, staying with her wouldn’t have been a problem at all.

Instead, Sophia went into labor almost 3 weeks early; the afternoon before Nichole’s wedding. I missed Sophia’s first call because I was already almost 2.5 hours away where Nichole lives and helping set things up and doing last minutes errands to help. When I called her back I found out she was in labor and she wanted me to get there as soon as possible.

I told Sophia I would do the best I could and would let her know immediately when I’d be there. I explained the situation to Nichole, who understandably also wanted me to be there for her but understood that Sophia wanted me with her too. Nichole was able to move her ceremony to the morning and make it a quick 25ish minute ceremony and there would just be a few hours gap between the ceremony and reception.

I thought this was a good compromise that would let me be there for both of my girls. I called Sophia and she wanted me to get there that night. I asked if her husband was with her and she said yes, so I asked her to please consider him as a second choice until I could get there. Sophia got upset and told me to forget about it.

I got to the hospital early the next afternoon and missed the birth by a couple of hours. Sophia was so mad she didn’t want me to come in when she was moved to a room. I thought that was understandable and she would talk to me soon but it’s been a couple of weeks now and I have tried to apologize to her.

I’ve talked to my son-in-law and he said they’re both mad that I chose to ditch Sophia when she needed me most for a party. So I am here asking an outsider’s perspective if I was wrong to not go to the hospital right away.

Check out what Reddit users had to say about this.

One reader said she’s NTA and they made a good point about weddings vs. childbirth.

And this individual pointed out that the sister had her husband there so she wasn’t going through this alone. 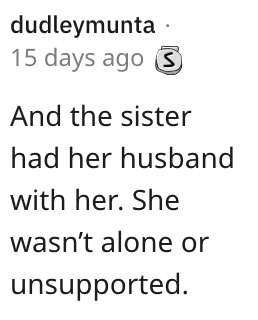 Another individual said she’s NTA and she did her best to accommodate all parties here. 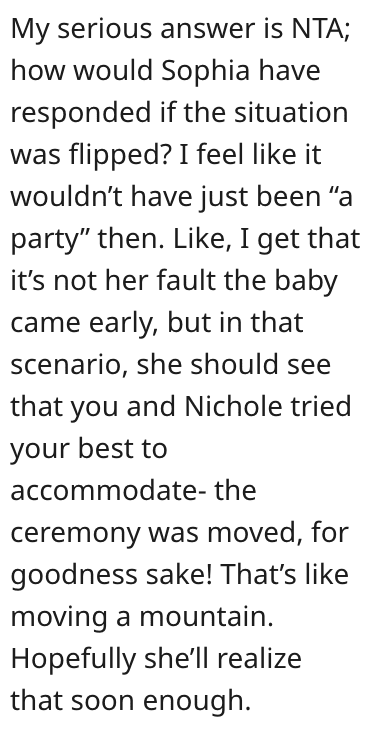